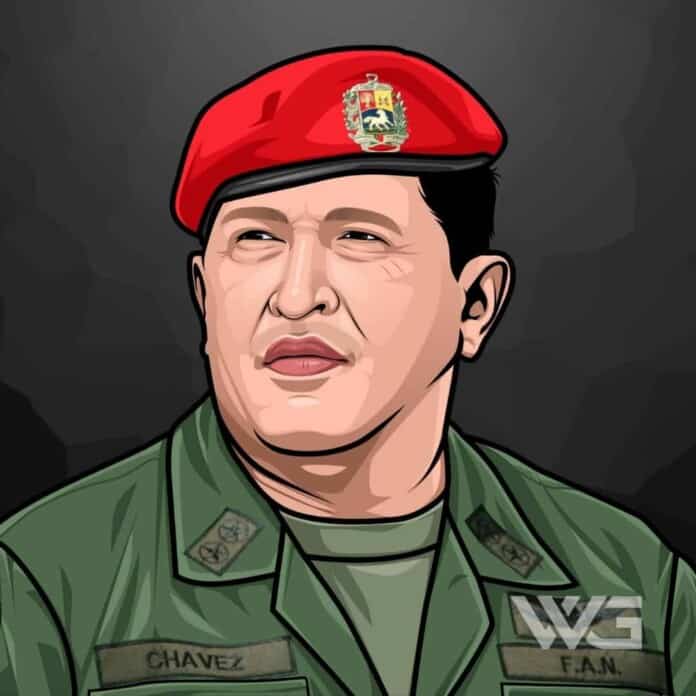 What is Hugo Chavez’s net worth?

Hugo Chavez was a Venezuelan politician.

Chavez was the president of Venezuela from 1999 until his death in 2013. He was also the leader of the Fifth Republic Movement’s political party from its foundation in 1997 until 2007.

He was born into a middle-class family in Sabaneta, Barinas. Chavez led the MBR-200 in its unsuccessful coup d’état against the Democratic Action government of President Carlos Andrés Pérez in 1992.

Hugo Rafael Chavez was born on the 28th of July, 1954, in Sabaneta. He was born in his paternal grandmother Rosa Inéz Chávez’s home, a modest three-room house located in the rural village Sabaneta.

The family was of Amerindian, Afro-Venezuelan, and Spanish descent. His parents, Hugo de los Reyes Chávez was described as a proud COPEI member. With no high school in their area, his parents sent him and his older brother to live with their grandmother Rosa. They attended Daniel O’Leary High School in the mid-1960s.

In 1999, the extended family amassed its fortune both through legal and illegal methods. The Chavez family and hundreds of other criminal organizations have subtracted $100 billion out of the nearly $1 trillion in oil income made by PDVSA, Venezuela’s state-controlled oil company, since 1999.

When Chavez died, he had been the President of Venezuela since 1999. When he was 17 years old, he enrolled in the Venezuelan Academy of Military Sciences, graduating in 1975 as a sub-lieutenant with a degree in Military Arts & Sciences.

He entered active military service as a member of a counter-insurgency battalion stationed in Barinas. His military career lasted 17 years, throughout which he held various positions.

Chavez held a variety of teaching positions. In 1983, he held the Revolutionary Bolivarian Movement, and in 1998 Chavez began to campaign for president. His public speaking style was noted for his flamboyancy and colloquialisms.

He worked to gain the trust of poor working-class citizens. In 1998, he went on to win the election with 56% percent of the vote. Chavez was married twice.

His first marriage lasted 18 years, during which they had 3 children. He then met his second wife, Marisabel Rodriguez de Chavez, from which he later on also divorced.

Here are some of the best highlights of Hugo Chavez’s career:

“I’m a man with many defects. I love. My children, my two daughters are with me, and I want a better world for my grandchildren, for your grandchildren.” – Hugo Chavez

“Racism is very characteristic of imperialism and capitalism. Hate against me has a lot to do with racism. Because of my big mouth and curly hair. And I’m so proud to have this mouth and this hair because it is African.” – Hugo Chavez

“To paraphrase Karl Marx, the great Karl Marx, a specter is haunting the streets of Copenhagen…Capitalism is the specter. Almost nobody wants to mention it…Socialism, the other specter Karl Marx spoke about, which walks here too, rather it is like a counter-specter. Socialism, this is the direction, this is the path to save the planet, I don’t have the least doubt. Capitalism is the road to hell, to the destruction of the world.” – Hugo Chavez

“Some people point to me as the cause of all society’s problems, others as if I am the benefactor, responsible for everything good, but I am neither former nor the latter. I am but a man in particular circumstances, and the most beautiful part is that an individual human life can contribute to the growth, the awakening of collective strength. That is what matters!” – Hugo Chavez

Now that you know all about Hugo Chavez’s net worth and how he achieved success; let’s take a look at some of the lessons we can learn from him:

We must confront the privileged elite who have destroyed a large part of the world.

The only way to save the world is through socialism, but a socialism that exists within a democracy; there’s no dictatorship here.

We must reduce all the emissions that are destroying the planet. However, that requires a change in lifestyle, a change in the economic model: We must go from capitalism to socialism.

How much is Hugo Chavez worth?

Hugo Chavez’s net worth is estimated to be $1 Billion.

How old is Hugo Chavez?

How tall is Hugo Chavez?

Hugo Chavez was a Venezuelan politician. Chavez had a net worth of $1 Billion at the time of his death on the 5th of March, 2013.

From a report from Criminal Justice International Associates, a global risk assessment and threat mitigation firm estimated that the Chavez family assets totaled between $1 and $2 billion.

What do you think about Hugo Chavez’s net worth? Leave a comment below.