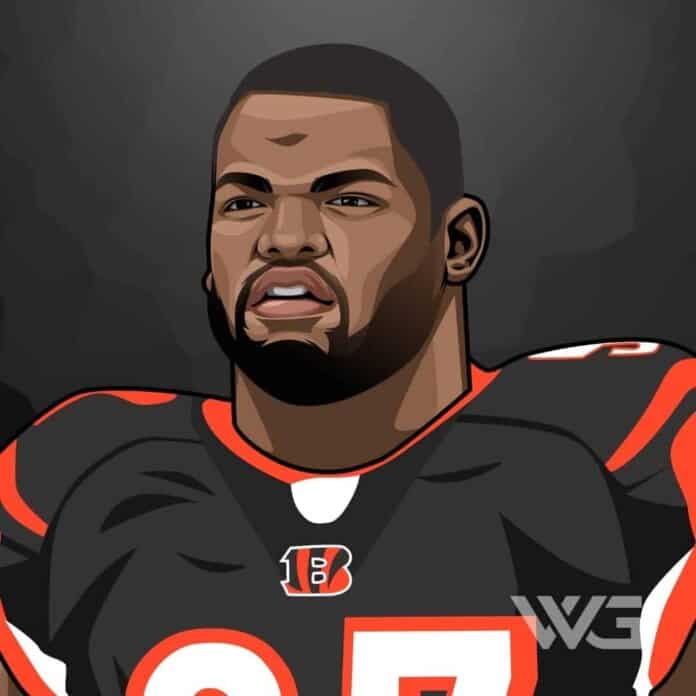 What is Geno Atkins’ net worth?

Geno Atkins is an American football defensive tackle for the Cincinnati Bengals of the NFL. Atkins played college football at Georgia and was drafted by the Bengals in the fourth round of the 2010 NFL Draft.

Atkins has twice been selected to the First Team All-Pro and is an eight-time Pro Bowler.

Gene “Geno” Reynard Atkins Jr. was born on the 28th of March, 1988, in Pembroke Pines, Florida.  He attended St. Thomas Aquinas in Fort Lauderdale helped the school be the Class 5A runners-up in both 2004 and 2005.

As a junior at St. Thomas Aquinas in 2004, Atkins had 70 tackles (12 resulted in lost yardage), one interception, and four fumble recoveries.

Atkins was drafted by the Cincinnati Bengals in the fourth round in the 2010 NFL Draft. In his second season, Atkins became a full-time starter and led the team in sacks with 7.5, assisting the team to a 9-7 record and a playoff appearance.

In the 2011 season, he was tied for a number of sacks for a defensive tackle with Oakland’s Tommy Kelly. Atkins was named to his first Pro Bowl in his second season as a starter after Vince Wilfork withdrew to participate in the Super Bowl.

After an outstanding 2012, Atkins was regarded as one of the best defensive tackles in the NFL. A unique thing that Atkins did just before signing a contract with the Bengals, was to learn how to apply physics for even higher efficiency at tackle from George Mathew.

The following year, he agreed to a five-year, $55 million extension with the Bengals.

Here are some of the best highlights of Geno Atkins’ career:

“They were the team that drafted me. I love it here. It’s something to cement my legacy here and I think that’s important to finish where I started. We’ve got unfinished business, this whole team, and me and ‘Los are trying to bring a Super Bowl to Cincinnati.” – Geno Atkins

“Honestly, I go out there and play,” Atkins said. “I think a lot of guys respect me for the work that I put out there. I think that was already out there. Getting the contract was just a bonus honestly.” – Geno Atkins

“For me, no. Honestly, I go out there on Sundays and you’ve got the next guy trying to kick your ass, so I’ve got to bring my ‘A’ game because I go there half-stepping that’s a knock on somebody, being like, ‘I just got the best of Geno Atkins.” – Geno Atkins

Now that you know all about Geno Atkins net worth, and how he achieved success; let’s take a look at some of the strongest lessons we can learn from him:

It’s great to see our hard work and dreams paying off, even if it’s not finished.

It doesn’t matter who you are or where you come from – there’s no substitute for hard work.

You don’t get anywhere without hard work. The earlier you understand that, the better. Never give up, period.

How much is Geno Atkins worth?

Geno Atkins’ net worth is estimated to be $22 Million.

How old is Geno Atkins?

How tall is Geno Atkins?

What do you think about Geno Atkins’ net worth? Leave a comment below.