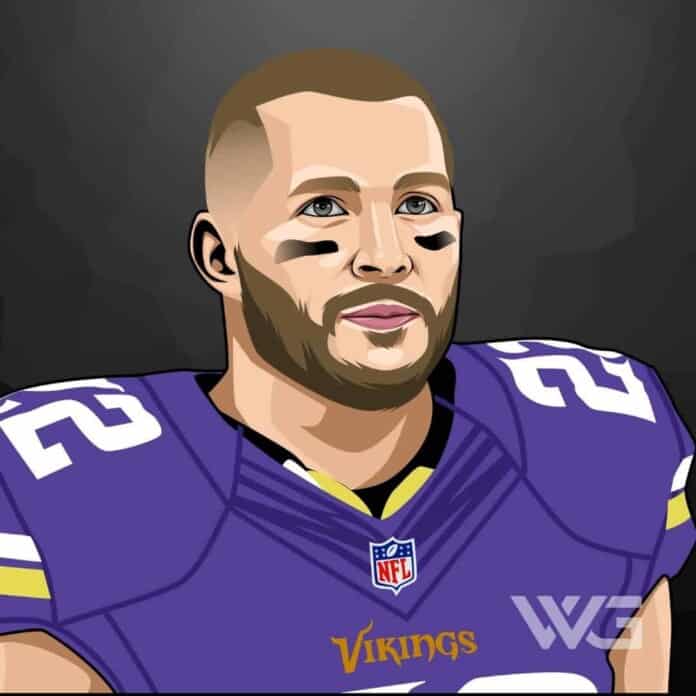 What is Harrison Smith’s net worth?

As of February 2023, Harrison Smith’s net worth is roughly $20 Million.

Harrison Smith is an American football safety who plays in the NFL for the Minnesota Vikings.

Smith was drafted in the first round of the 2012 NFL Draft. He played college football for Notre Dame.

Harrison Smith was born on the 2nd of February, 1989, in Georgia. Smith attended Knoxville Catholic High School in Knoxville, Tennessee.

In his senior season, he gained 1,340 yards rushing to go with 19 touchdowns, caught 23 passes for 453 yards and six touchdowns, and also made 61 tackles, two tackles for loss, two interceptions, and caused two fumbles on defense.

In 2012, the Minnesota Vikings drafted Smith in the first round of the 2012 NFL Draft after trading up with the Baltimore Ravens.

The same year, the Minnesota Vikings signed Smith to a four-year, $7.13 million contract with $5.78 million guaranteed and a signing bonus of $3.63 million.

He entered training camp competing with Jamarca Sanford and Andrew Sendejo to be the Minnesota Vikings’ free safety. Smith was named the starting free safety to begin the regular season.

Smith resumed as the starting free safety under new head coach Mike Zimmer. In the season-opener against the St. Louis Rams, Smith made two solo tackles, a pass deflection, a sack, and scored an 81-yard touchdown after intercepting Shaun Hill in the 34-6 victory.

In the season-opener against the St. Louis Rams, Smith made two solo tackles, a pass deflection, a sack, and scored an 81-yard touchdown after intercepting Shaun Hill in the 34-6 victory.

In Week 14 against the Detroit Lions, Smith intercepted a pass thrown by rookie quarterback David Blough that was intended for wide receiver Kenny Golladay in the 20–7 win.

Here are some of the best highlights of Harrison Smith’s career:

“I don’t want to say never, but I don’t see myself doing stuff like that. It’s not me. It would make me uncomfortable. The psychological part — that would affect me.” – Harrison Smith

“Not so much scared of contact or hitting people or taking on certain guys but of getting beat, of giving up touchdowns. People always say, ‘Oh, I’m not scared of anything.’ To me, fear is one of the best motivators.” – Harrison Smith

“We’ve been in some close games when we’ve let down. When that happens you need to make plays. All it takes is one play. Today our defensive line played strong all day and their blitzing was very effective.” – Harrison Smith

“He’s ridiculous. I’ve never seen anybody have the kind of impact he has. He’s getting better and better. I’m happy I don’t have to play against him.” – Harrison Hunt

Now that you know all about Harrison Smith’s net worth, and how he achieved success; let’s take a look at some of the lessons we can learn from him:

A lot of hard work is hidden behind nice things.

2. Work For Something That Will Give You Success

Chop your own wood and it will warm you twice.

Sticking to good habits can be hard work, and mistakes are part of the process. Don’t declare failure simply because you messed up or because you’re having trouble reaching your goals.

How much is Harrison Smith worth?

Harrison Smith’s net worth is estimated to be $20 Million.

How old is Harrison Smith?

How tall is Harrison Smith?

Harrison Smith is an American professional football player who was drafted #29 in the 2012 NFL Draft by the Minnesota Vikings and has played for the Vikings his entire NFL career.

As of February 2023, Harrison Smith’s net worth is roughly $20 Million.

What do you think about Harrison Smith’s net worth? Leave a comment below.