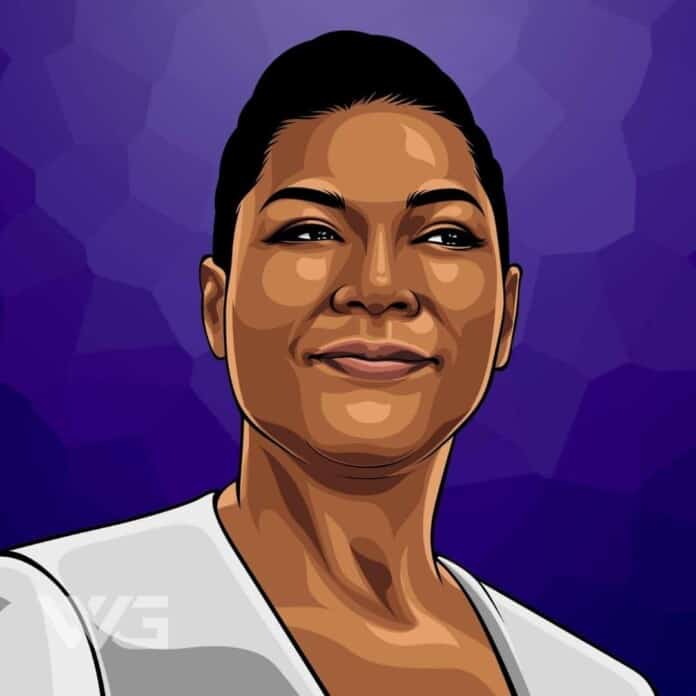 What is Queen Latifah’s net worth?

As of November 2022, Queen Latifah’s net worth is roughly $70 Million.

Dana Elaine Owens, known professionally as Queen Latifah, is an American singer, songwriter, actress, and producer from New Jersey. Owens signed with Tommy Boy Records in 1989 and released her debut album ‘All Hail the Queen’ the same year.

Dana Elaine Owens was born on the 18th of March, 1970, in East Orange, New Jersey, Owens is the daughter of Rita Lamae and Lancelot Amos Owens.

Her parents divorced when Latifah was 10 years old. Latifah was raised in the Baptist faith and attended a Catholic school in Newark, New Jersey. She found her stage name, Latifah, meaning “delicate” and “very kind” in Arabic.

Queen Latifah began her musical career by elevating her business into a record production company. In 1991, she rolled out Flavor Unit Records and Management Company in New Jersey. She became CEO of this company and the same year she also tried her hand at acting.

In 1992, she appeared in crime thriller ‘Juice’. Soon she grabbed a leading role in a sitcom ‘Living Single’. This comedy show was a groundbreaking one.

Next year she portrayed a lesbian bank robber in the movie ‘Set it Off’. She costarred with Jada Smith and Vivica Fox.

Two years later in 1998, she worked in the comedy movie ‘Living Out Loud’. This year she, along with Ro Smith, co-produced and released her fourth hip-hop album ‘Order in the Court’.

Her film ‘Taxi’, which was released in 2004, was not very well received. On the music front, after her last album ‘Order in the Court’, she shifted her focus primarily to singing soul music and jazz standards.

In 2015, she gave a powerful performance in ‘Bessie’. She portrayed legendary singer Bessie Smith in this HBO film. Latifah received Emmy and Golden Globe nominations for this role.

Here are some of the best highlights of Queen Latifah’s career:

“You almost have to step outside yourself and look at you as if you were someone else you really care about and really want to protect. Would you let someone take advantage of that person? Would you let someone use that person you really care about? Or would you speak up for them? If it was someone else you care about, you’d say something. I know you would. Okay, now put yourself back in that body. That person is you. Stand up and tell ’em, “Enough!” – Queen Latifah

“I actually enjoy that I never really needed to be hanging out with every celebrity in Hollywood; I just go home and hang out with my cousins, my best friends. I’m not treated like royalty; they love me to death, but they don’t treat me like royalty. So it’s easy for me; they’ll tell me the truth, whether it hurts or not. And I need that; I’ve always been given that.” – Queen Latifah

“Hip-hop definitely taught me a lot. Having to create your own identity and become known and respected in a male-dominated field – it requires some guts. There are times you have to be strong, and times when you have to stand alone for what you believe in.” – Queen Latifah

“The good thing about movies is that they’re subjective. You can connect to different themes depending on your own perspective.” – Queen Latifah

“Look at people for an example, but then make sure to do things your way. Surround yourself with positive people.” – Queen Latifah

Now that you know all about Queen Latifah’s net worth, and how she achieved success; let’s take a look at some of the strongest lessons we can learn from her about queendom:

1. Laugh! Don’t Take Yourself Too Seriously

Don’t take yourself or others too seriously. Have fun while we can.

2. True Queens Support One Another

Real and true women stand up for each other and support one another.

Nothing comes easy, life is hard sometimes but that doesn’t mean that we should not work hard. Never give up on yourself.

How much is Queen Latifah worth?

Queen Latifah’s net worth is estimated to be $70 Million.

How old is Queen Latifah?

How tall is Queen Latifah?

As of November 2022, Queen Latifah’s net worth is estimated to be $70 Million.

What do you think about Queen Latifah’s net worth? Leave a comment below.