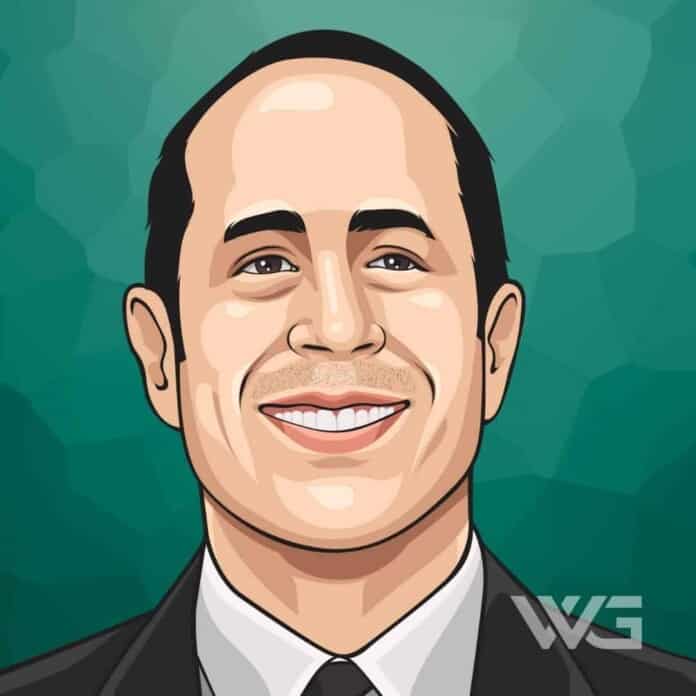 What is Jerry Seinfeld’s net worth?

As of February 2023, Jerry Seinfeld’s net worth is estimated to be $950 Million.

Jerry Seinfeld is an American stand-up comedian, actor, producer, and writer. Seinfeld is best known for playing himself in the sitcom ‘Seinfeld’, which was written by Larry David and himself.

He’s had an incredibly successful career as a stand-up comedian.

Jerry Seinfeld was born on the 29th of April 1954, in Brooklyn, New York City. His mother was of Syrian descent, and his father of Hungarian descent and they were both raised in Jewish households.

Seinfeld grew up in Massapequa, New York, and attended Massapequa High School on Long Island. He spent time in Israel when he was 16, volunteering in Kibbutz Sa’ar.

Whilst Seinfeld was at college, he was involved in various productions, and this was where his inspiration to become a stand-up comedian came from.

He tried out at various open mic nights around New York City and got a role in the sitcom Benson in 1980; which he was later fired from. In 1981, Seinfeld appeared on The Tonight Show, and people quickly began to become aware of who he was.

In 1988, he created The Seinfeld Chronicles with Larry David, which was hugely successful, and is where most people know Seinfeld from.

Since then, Jerry has appeared in a lot of different productions and had an incredibly successful career in stand-up comedy.

His ongoing 2012 web series; ‘Comedians in Cars Getting Coffee’, became a hit on Crackle and Netflix, and has recently won a copyright dispute battle where Plaintiff Christian Charles sued Seinfeld and others in 2018.

His career has been so successful, that Jerry Seinfeld’s net worth is estimated to be $950 Million, making him the richest comedian in the world.

How Does Jerry Seinfeld Spend His Money?

Seinfeld lives in East Hampton. He bought the property from Billy Joel in 2000. The house cost $32 million.

His collection of cars is estimated to be worth between $50 to $150 million.

Seinfeld and his wife both are committed to helping charity organizations all over the world. They have both started an organization named GOOD+ which has a mission to stop family poverty by providing clothing for people in need.

He has also started the Seinfeld Family Foundation to help children’s education and health.

Here are some of the best highlights of Jerry Seinfeld’s career:

“It’s amazing that the amount of news that happens in the world every day always just exactly fits the newspaper.” – Jerry Seinfeld

“To me, if life boils down to one thing, it’s movement. To live is to keep moving.” – Jerry Seinfeld

“A bookstore is one of the only pieces of evidence we have that people are still thinking.” – Jerry Seinfeld

“You can be passionate about anything. Pay attention, don’t let life go by you. Fall in love with the back of your cereal box.” – Jerry Seinfeld

View our larger collection of the best Jerry Seinfeld quotes!

How much is Jerry Seinfeld worth?

Jerry Seinfeld’s net worth is estimated to be $950 Million.

How old is Jerry Seinfeld?

How tall is Jerry Seinfeld?

Jerry Seinfeld is the richest comedian in the world, being worth almost a billion dollars as things currently stand.

As of February 2023, Jerry Seinfeld’s net worth is estimated to be $950 Million.

What do you think about Jerry Seinfeld’s net worth? Leave a comment below.