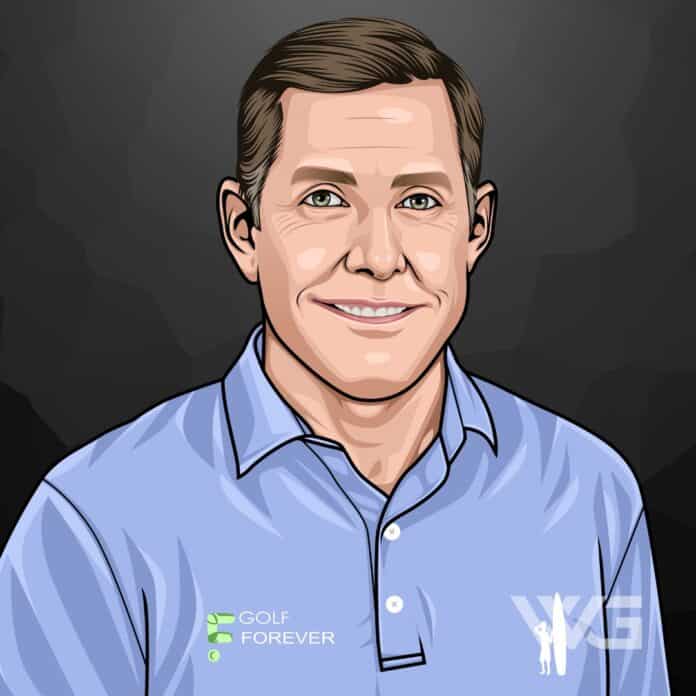 What is Justin Leonard’s net worth?

Justin Leonard is a popular professional golfer and PGA Tour champion who is now focussing more on commentating than playing.

Over three decades, Justin picked up many wins, with his first being the Buick Open, in 1996. The following year, the smooth-swinging Texan won the Open Championship at Royal Troon in 1997.

He is ranked as one of the most popular golfers in the world but only entered a single tournament in 2022, in which he failed to make the cut.

As of February 2023, Justin Leonard’s net worth is estimated to be $25 Million.

At the age of 15, Justin had his first experience with a golf club when his father took him along with his friends on a golf trip.

This resulted in him developing a love for the sport and his father training him to be the best golfer he could be.

Justin attended Lake Highlands High School, graduating in 1990. He then attended the University of Texas while starting his career as a golfer.

In 1994, he became the NCAA champion, a competition that is considered the premier event in U.S. men’s collegiate golf.

His family became involved in his career, with his mom dealing with the logistics, and his dad handling the investments and schedule of events.

Justin’s sister was also a big help to his career with her extensive knowledge of public relations and the media.

For the three years from 1992 to 1994, Justin won the U.S Amateur championship and became a two-time All-American.

He won the Haskins Award in 1994, his first major award, and went on to be the fourth golfer to go straight from college to the PGA Tour without help from a Q School.

Justin’s career started very well with his first win on the PGA Tour in 1997 at the Open Championship and the following year, in 1998, he snagged the Players Championship.

Justin moved his family to Aspen, Colorado in 2015, where he continued to train and pursue his golfing career, but it wasn’t long before he decided to change careers and signed on as a golf announcer and commentator later that year.

He joined Golf Central’s “Live From” as an analyst for the PGA Tour live tournament commentary, but while pursuing his career in television, he still felt like he wasn’t yet finished with his golfing career.

Leonard returned for a limited number of tournaments during the 2016 season, only playing in a total of 16 events throughout that year. The following year, he was able to qualify for the 2017 Texas Open but only managed 58th place.

Justin Leonard was never able to reach the heights of players like Gary Play, Ernie Els, and Jack Nicklaus, who managed to stay ahead of the pack for most of their careers.

Recently, he returned to play at an event on the PGA tour early in 2022 but failed to make the cut.

This is not the last we’ll see of Justin as he qualifies for the PGA Tour Champions events once he turns 50.

In the meantime, he continues to provide fans with the benefit of his 3 decades of pro golfing experience as he commentates on the current tour.

Justin has earned a huge amount over the years, raking in more than $36 million in winnings, not to mention his earnings from sponsorships and endorsements.

His most successful year was in 2008 when he won more than $4 million in prize money on the circuit.

Once Justine had left the regular tour in 2017, his earnings took a big dip as he pursued a more leisurely, family-focused life.

After taking on the role of golf commentator in 2018 and securing a 2-year contract, Justine realized that his heart just wasn’t in it anymore and only played a couple of rounds of professional golf.

After earning millions during the course of his professional career, Justine decided that he wanted a change of scenery.

To that end, he and his wife discussed moving to Aspen, Colorado, as it was the family’s favorite getaway destination.

Here’s a breakdown of Justin Leonard’s annual net worth:

Without having to worry about having the facilities to practice golf year-round, Aspen was the perfect place for Leonard to de-stress.

He’d spent many years on the PGA tour and realized that he needed the break and time to enjoy his family.

Justin married his wife, Amanda Leonard, who worked for CNN in Atlanta before moving to Dallas, Texas, in 2002.

While the children were young, the family would travel to a lot for Justin’s tournaments. But once the children grew older, there was less time for traveling. Justin found that being away from his family took a toll on him and the combined stress of tour life began to affect his game.

After not winning a major title since 2008, and not being in the top earnings bracket, Justin decided that he and the family needed a change of scenery.

Justin and his wife discussed various options and, in the end, he and his family decided on Aspen, Colorado, as the perfect place to raise the family.

Justin has always been a serious golfer with a stern face and an apparently humorless character.

Nothing could be further from the truth. While he was certainly serious out on the links, he just wasn’t one to engage publicly when he was concentrating on his game.

Here are some memorable moments from Justin Leonard’s career:

Justin was always meticulous in his preparation for each game and his wife noticed that even when he was home, his mind was still out on the course.

This led to a huge amount of stress as he missed his family when he was away from home and was a major reason that he decided to retire.

How Does Justin Leonard Spend His Money?

Justin believes in investing in real estate and sold his suburban property in Dallas for $13.8 million before moving to Aspen.

Once he moved his family to Aspen, he purchased a cozy five-bedroom retreat worth $9 million.

Justin and the family are sport-mad, with his wife competing in marathons and triathlons while he swims, runs, and takes to the hills on one of his trail bicycles.

His four-car garage isn’t filled with the most expensive cars in the world, but rather a vehicle that is more suited to a family who spends a lot of time outdoors.

Justin made his transition to the senior tour in 2022 after he turned 50 years old.

He’d not been back to the Firestone Country Club since 2010, but the memories flooded back when he returned for his PGA Tour Champions debut there in July 2022.

Here are some of the best highlights of Justin Leonard’s career:

While he has been spending his time commentating, Justine has also been in training for the past 18 months, in preparation for his first outing as a senior tour player.

The last time Leonard had been at the Firestone course was in 2000 when Tiger Woods had beaten him into joint-second, with an 11-shot lead.

Justine Leonard has always worked really hard to improve his golf game. Even when he was winning championships, he continued to put in long hours of practice to improve every aspect of his game.

Here are our favorite quotes from Justin Leonard:

Justin spent a lot of time being stressed out about how well he was playing and not enjoying his time on the course.

When he failed to get results, he struggled to keep motivated and eventually realized that time with his family was more important than chasing a win.

Take out the money, fame, and victories, and just enjoy the passion you have for the game.

Also, don’t ruin it with greed as, in the final analysis, fame is fleeting and money doesn’t buy you happiness.

2. Those Who Fail Come Back Stronger

When someone is down, they must become stronger to get back up.

It is for this reason that you shouldn’t underestimate people, as those opponents who are struggling are the ones who will surprise you.

Failing can help you realize your mistakes and weaknesses and help you to home in on what you must fix.

You can use your mistakes and failures to help improve and to become better the next time around.

Justin Leonard went from being one of the youngest professional golfers in the world to winning championships in a short time.

He initially won many tournaments and received various awards for his skillful play, but struggled to keep his momentum for the last 10 years of his career.

Realizing that he needed a change, Justin moved cities and retired from golf to spend more time with his family and to become a trusted golf commentator.

He is now eligible for the senior tour and has decided to give it a crack, but not go overboard in the process.

As of February 2023, Justin Leonard’s net worth is estimated to be $25 Million.

What do you think about Justin Leonard’s net worth? Leave a comment below.