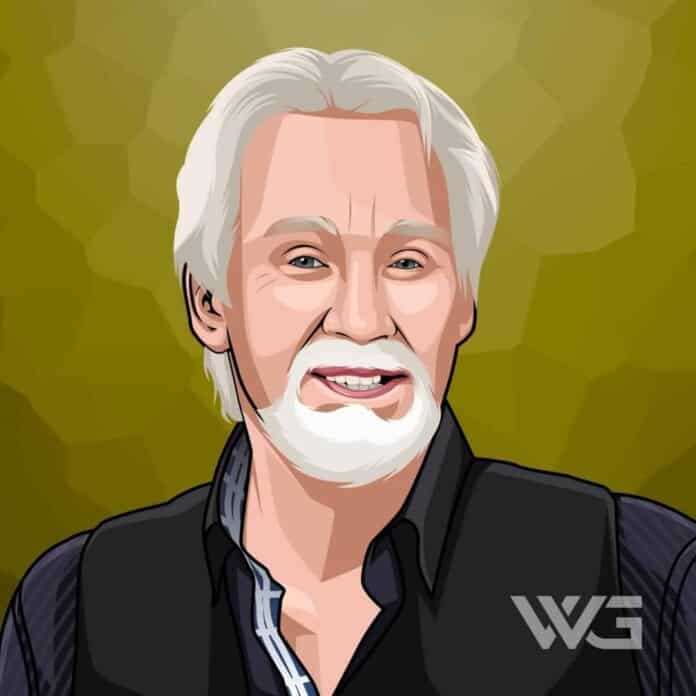 What is Kenny Rogers’ net worth?

He is a member of the Country Music Hall of Fame. He has sold over 100 million records worldwide, making him one of the best-selling music artists of all time.

Kenneth Ray ‘Kenny’ Rogers was born on the 21st of August, 1938, in Houston, Texas. Rogers is the son to Edward Floyd Rogers, a carpenter and Lucille Rogers, a nurse assistant.

He attended the Jefferson Davis High School, Houston, and became the first member of his family to finish high school.

In the mid-1950s, Rogers began his career in music with the band, ‘The Scholars’. The band came to prominence after they released the single, ‘Poor Little Doggie’. In 1958, he came out with a minor solo titled, ‘That Crazy Feeling’.

In 1966, he became a part of the American folk music group, ‘The New Christy Minstrels’. He was a singer and a double bass player for the group but was not happy with his association with the group as it did not offer him the success he wanted.

The following year, he formed the group called, ‘The First Edition’, along with fellow Minstrel members Mike Settle, Terry Williams and Thelma Camacho.

In 1980, he released his eighth studio album, ‘Gideon’, which like its successors topped the country charts and the pop charts. The album also featured the international hit, ‘Don’t Fall in Love with a Dreamer’, a duet with Kim Carnes.

In 2011, he released the album, ‘The Love of God’ under the Cracker Barrel label. The following year he came out with the album titled, ‘Amazing Grace’ and the holiday album, ‘Christmas Live!’

Here are some of the best highlights of Kenny Rogers’ career:

“So sweep away the sand an’ dry the ocean, an’ just pack the moon an’ stars up in a cardboard box. And stop the clouds from chimin’, block the sun from shinin’,an’ paint the sky a deeper shade of blue, ’cause my world’s over without you.” – Kenny Rogers

“With all my heart, and all my soul, I will love you till the winds don’t blow. Until the oceans turn to stone, my love is yours and yours alone. My love is forever, until forever’s gone.” – Kenny Rogers

“George Jones will always be one of the most amazing singers who ever lived. He was a true Country Music legend who made music very personal to the listener – I think more than anyone else. He will be dearly missed, but always remembered.” – Kenny Rogers

“You know, I think the greatest gift in the world is a good employee, you know, or people who can do your work for you and do it well the way you’d like to have it done. And I’ve always been able to surround myself with really good people.” – Kenny Rogers

“I still like going on the road and performing, but it’s getting tougher. I try to have my wife and the twins with me but it’s getting harder and harder for them. They need to be in a home environment and not traveling with me.” – Kenny Rogers

Now that you know all about Kenny Rogers’ net worth, and how he achieved success; let’s take a look at some of the lessons we can learn from him:

Most people are successful because someone they care about really believed in them, and they didn’t want to disappoint that person.

Be friendly to all, but friends to a few.

Someone new is going to come along doing something different. Trends ultimately go back to the beginning, and someone will come along with a country feel again.

How much is Kenny Rogers worth?

Kenny Rogers’ net worth is estimated to be $250 Million.

How old is Kenny Rogers?

How tall is Kenny Rogers?

Kenny Rogers has scored over 120 hit singles and has topped the country and pop charts for an unparalleled 200 individual weeks.

He is one among the highest- selling artists of all time, and has sold more than 130 million record copies across the world.

What do you think about Kenny Rogers’ net worth? Leave a comment below.

Discover the television and movie highlights, as well as the brand endorsements that have helped her achieve her impressive net worth.