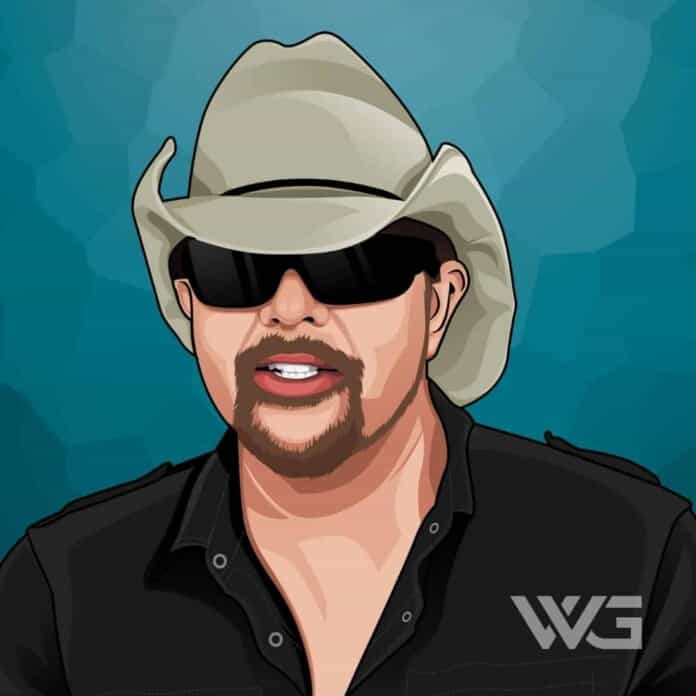 What is Toby Keith’s net worth?

His albums all earned Gold or higher certification and produced several Top Ten singles, including his debut “Should’ve Been a Cowboy”, which topped the country charts and was the most-played country song of the 1990s.

Toby Keith Covel was born on the 8th of July, 1961, in Clinton, Oklahoma. Keith started playing music at a young age after being inspired by the musicians who worked in his grandmother’s supper club.

After working for a while in the oil industry and playing defense in the USFL football league, he decided to pursue a career in music.

In 2001, Keith’s father was killed in a traffic accident. The incident, combined with the events of September 11, prompted Keith to write the controversial “Courtesy of the Red, White and Blue (The Angry American),” which was hugely popular, particularly among military personnel.

Keith was named Entertainer of The Year by the Academy of Country Music in 2002 and 2003. He received an additional surge of media attention in 2003 when he engaged in a public clash with Natalie Maines, the lead singer of the Dixie Chicks.

Keith took even more offense to Maine saying that she was “ashamed” of President George W. Bush at a concert. In his own concerts, he had pictures of Maines as Saddam Hussein projected on a video screen while he played his hit patriotic anthem.

He released Shock’n Y’All in 2003, which reached the top of the country and pop album charts. The recording’s title is a play on the military expression, “shock and awe,” from the Iraq war, and his ode to the troops, “American Soldier,” was a big success.

His next effort, Honkytonk University in 2005, featured a duet with country music icon Merle Haggard on “She Ain’t Hooked on Me No More.”

Here are some of the best highlights of Toby Keith’s career:

“My daddy served in the army where he lost his right eye, but he flew a flag out in our yard until the day that he died. He wanted my mother, my brother, my sister and me, to grow up and live happy in the land of the free.” – Toby Keith

“I will do my duty no matter what the price, I’ve counted up the cost, I know the sacrifice. Oh, and I don’t want to die for you, but if dying is asked of me, I’ll bear that cross of honor cause freedom don’t come free.” – Toby Keith

“Grandpappy told my pappy, back in my day son, a man had to answer for the wicked he done. Take all the rope in Texas, find a tall oak tree, round up all the bad boys, and hang them in the streets for all the people to see.” – Toby Keith

“A sucker punch came flying from somewhere in the back. As soon as we can see clearly with our big black eye, we’re going to light up your world like the fourth of July.” – Toby Keith

“I’ve always said I can’t tell sometimes that people even have an album out until I see them nominated for a Grammy. I think the country gets dumped on across the board by the Grammys.” – Toby Keith

Now that you know all about Toby Keith’s net worth, and how he achieved success; let’s take a look at some of the lessons we can learn from him:

You never know how stories grow and change over time, but one story that Toby has told seemingly his entire career was about coming to Nashville.

He had five or six songs on a cassette. Songs he had written and recorded. He went to every label in Nashville and they all turned him down. Like many successful people, Toby heard a lot of “no’s”, but he never quit. He would hear it and move on to the next opportunity. Keith kept pushing.

2. Be Patient With Opportunity

You have to be patient. But you also have to look for opportunities. If you want that one good one you better be looking for 100 options.

Toby sticks with businesses that make sense for him. It started with music and touring. Then it expanded into restaurants. That’s not an easy business, but for Toby it made sense.

How much is Toby Keith worth?

Toby Keith’s net worth is estimated to be $365 Million.

How old is Toby Keith?

How tall is Toby Keith?

Toby Keith is an American country music singer who started playing music at a young age after being inspired by the musicians who worked in his grandmother’s supper club. In the early ’90s, Keith signed with Mercury Records and by 1993 his self-titled debut album was certified platinum.

As of February 2023, Toby Keith’s net worth is approximately $365 Million.

What do you think about Toby Keith’s net worth? Leave a comment below.