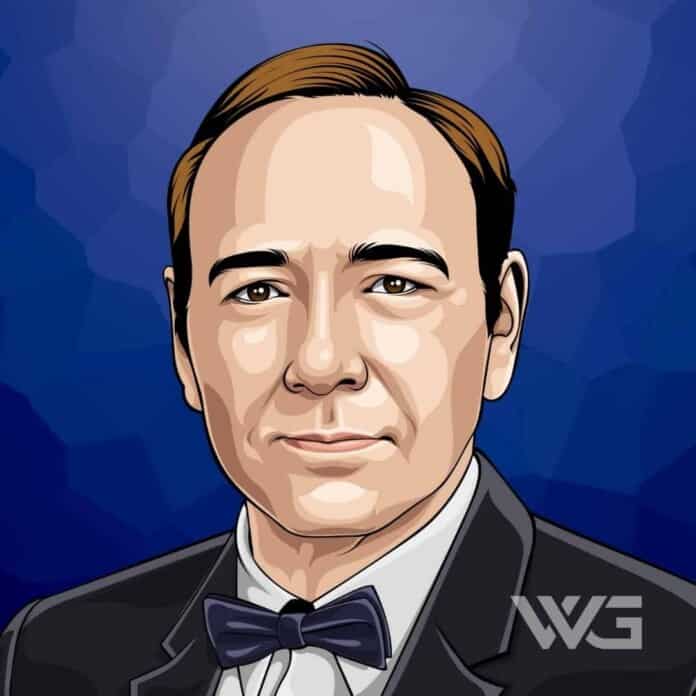 What is Kevin Spacey’s net worth?

As of November 2022, Kevin Spacey’s net worth is estimated to be $70 Million.

Kevin Spacey Fowler is an American actor, singer, and producer from South Orange. Spacey is best known for his performances in the films ‘Swimming with Sharks’ (1994), ‘Seven’ (1995), and ‘American Beauty’ (1999).

As of this year, he starred as ‘Ron Levin’ in the crime drama film ‘Billionaire Boys Club’ (2018).

Spacey has collaborated with some of the best actors throughout his career such as Morgan Freeman, Brad Pitt, Ansel Elgort and Emma Roberts.

Kevin Spacey Fowler was born in South Orange, New Jersey on the 26th of July, 1959.

He is the son of Thomas Fowler and Kathleen Ann. When Spacey was 4 years old his family relocated to Southern California. Spacey has stated that his childhood was physically and sexually abusive.

Spacey attended Canoga Park High School where he starred in the school’s senior musical play ‘The Sound of Music’. He began working as an actor in the 1980’s when he made his first Broadway appearance.

Kevin Spacey began his career as an actor when he had his first professional stage appearance in ‘Henry VI, Part 1’ in 1981.

Over the next few years, he grew in prominence as a stage actor and was very popular for his acting skills. Following his big success as a stage actor, he decided to venture into film and television.

His portrayal of the character earned him much critical appraise and made him a superstar in Hollywood.

As of November 2022, Kevin Spacey’s net worth is estimated to be $70 Million.

Here are some of the best highlights of Kevin Spacey’s career:

“If you’re watching a film on your television, is it no longer a film because you’re not watching it in a theatre? If you watch a TV show on your iPad, is it no longer a TV show? The device and the length are irrelevant; the labels are useless, except perhaps to agents and managers and lawyers, who use these labels to conduct business deals.” – Kevin Spacey

“I liked it because it was such a dangerous script and showed just what human beings are capable of. Here was a movie in which Morgan Freeman and Brad Pitt, who always win in every movie they ever do, simply don’t win. I felt that was outrageous for a commercial movie.” – Kevin Spacey

“Clearly, the success of the Netflix model, releasing the entire season of ‘House of Cards’ at once, proved one thing: The audience wants the control. They want the freedom. If they want to binge as they’ve been doing on ‘House of Cards’ and lots of other shows, we should let them binge.” – Kevin Spacey

“The fact is that HBO is doing the kind of films and the kind of stories that the movie industry used to do. You look at a lot of the specialty sections of studios that have gone under… and there’s no doubt in my mind why filmmakers and screenwriters and actors are ending up at a place like HBO. They do it better than anybody.” – Kevin Spacey

View our larger collection of the best Kevin Spacey quotes!

Now that you know all about Kevin Spacey’s net worth, and how he became successful; let’s take a look at some of the lessons we can learn from him:

1. Grab your opportunities with both hands

We all know this and it’s very important to say doors are shut in our faces and obsess over how we’re kept out of the industry. But if you want it, you must go and do it.

There are ways of ensuring the two work together so you can create and get your work to an audience. Collaboration is the key, and if you work things through it will finally work.

With great power comes great responsibility. They come and go but storytelling forever. Television is a fertile ground and it’s because of platforms like Netflix, Hulu, HBO, and Showtime. Forget about the platforms.

How much is Kevin Spacey worth?

Kevin Spacey’s net worth is estimated to be $70 Million.

How old is Kevin Spacey?

How tall is Kevin Spacey?

Kevin Spacey has built up an incredible net worth throughout his career as a successful actor. Among many stars, he has starred in worldwide films including ‘Seven’ and ‘American Beauty’.

As of November 2022, Kevin Spacey’s net worth is estimated to be roughly $70 Million dollars.

What do you think about Kevin Spacey’s net worth? Leave a comment below.