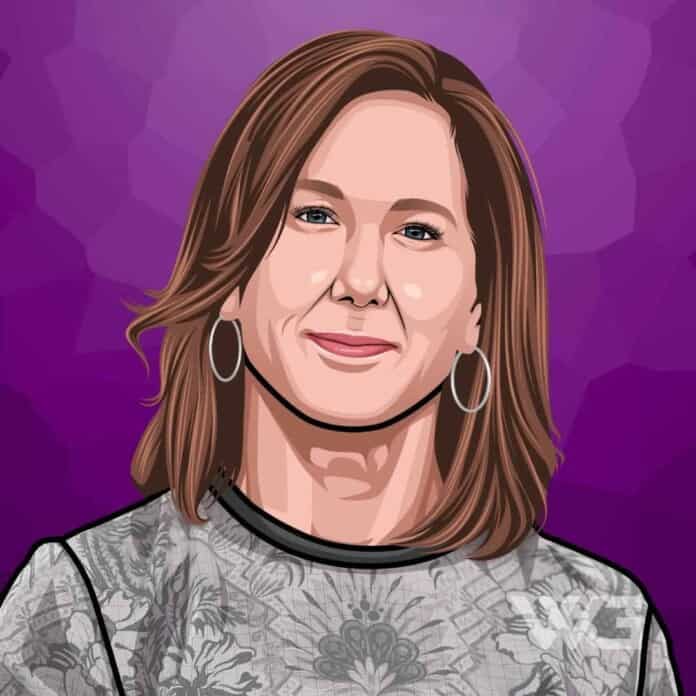 What is Kathleen Kennedy’s net worth?

Kathleen Kennedy is an American film producer. Kennedy is the current president of Lucasfilm. Kennedy co-founded the production company Amblin Entertainment alongside Steven Spielberg and Frank Marshall in 1981.

Her debut film as a producer was ‘E.T the Extra-Terrestrial.’ A decade later, she produced the ‘Jurassic Park’ franchise alongside Steven Spielberg again. In 2012, she became the president of Lucasfilm.

Kathleen Kennedy was born on the 5th of June, 1953, in California. Kennedy is the daughter of Dione and Donald Kennedy. She has a twin sister named Connie. She attended Shasta High School, where she graduated in 1971.

Kennedy enrolled at San Diego State University and majored in film and telecommunications.

She eventually got a job at the TV station KCST. After KCST, she spent a few years producing a local talk show, ‘You’re On,’ and then moved to Los Angeles.

Kennedy rose to fame when she served as a producer for ‘E.T the Extra-Terrestrial’ in 1982. She earned a “Best Picture Academy Award” nomination for the film, and it was the highest-grossing film in history until ‘Jurassic Park’ surpassed it in 1993.

In 1981, Kennedy co-founded Amblin Entertainment with Spielberg and Frank Marshall. A few years later, she produced ‘Indiana Jones and the Temple of Doom’ alongside Marshall and George Lucas.

During the 1990s, she worked on more than 30 projects such as ‘Cape Fear,’ ‘The Bridges of Madison County,’ and ‘The Sixth Sense.’ She earned an Oscar nomination for ‘The Sixth Sense’ and ‘Seabiscuit,’ ‘Munich,’ ‘The Curious Case of Benjamin Button,’ ‘War Horse,’ and ‘Lincoln.’

Kennedy has served as a producer on several ‘Star Wars’ films and the Disney series ‘The Mandalorian.’ Throughout her career, she has been nominated for eight Academy Awards.

She has earned awards from the Academy of Science Fiction, Fantasy & Horror Films, Alliance of Women Film Journalists, and Christopher Awards.

How Does Kathleen Kennedy Spend Her Money?

Kathleen Kennedy is one of the wealthiest producers of all time. Kennedy likes to spend some of her fortunes on real estate.

Kennedy is a proud owner of a home in Malibu. She purchased the home in 2015 for $9.75 million. The home formerly belonged to “Golden Girls” star Bea Arthur.

Here are some of the best highlights of Kathleen Kennedy’s career:

“If all you’re doing is playing it safe – trying to make the same movie over and over again – that’s when the audiences say, ‘Oh, this is just a moneymaking machine.’ But if it’s genuinely in service to the art form, then the franchise concept is being used in a way that’s exciting.” – Kathleen Kennedy

“I’ve had filmmakers, I even had Bono come and talk to me about having a sequel to ‘E.T.’ help with an environmental message – I listened. I can certainly understand. I mean, the great thing about Bono is that everything he does is in service to a greater cause.” – Kathleen Kennedy

“We look at Marvel, but we’re not trying to emulate that in any way. In fact, we often talked about how distinctive what we’re trying to do with ‘Star Wars’ is from Marvel. They’ve been extremely successful in exploiting the characters in that universe, and we have a place. We have the galaxy.” – Kathleen Kennedy

“Having a female point of view in the room – when you get into a discussion about behavior – who would say what and how they would interact with one another. In certain situations, women are going to have a different opinion on that than men. It made for a really balanced conversation in the room.” – Kathleen Kennedy

“The producer, in effect, has to work as a translator. You form a very tight relationship with the director and writer from the beginning, and then you are constantly communicating to the various people that begin to come into the process, as you are trying to manage to hold on to a vision that needs to be communicated over a long period of time.” – Kathleen Kennedy

Now that you know all about Kathleen Kennedy’s net worth and how she achieved success; let’s take a look at some of the lessons we can learn from her:

1. The Meaning Of a Team

You need to work with everybody and don’t have to be their best friend. You can experience the fun of competition and driving toward a common goal without pushing to bond in some major way with each individual on a project.

Success is always a matter of some luck and timing.

There’s no way a director can communicate with every person on the set, yet they need to motivate and instill an ambition to do their best work.

How much is Kathleen Kennedy worth?

Kathleen Kennedy’s net worth is estimated to be $300 Million.

How old is Kathleen Kennedy?

How tall is Kathleen Kennedy?

Her husband, Frank Marshall, is the 6th highest-grossing producer with $9.4 billion.

The only producer who has grossed more than Kennedy is Marvel’s, Kevin Feige. Kennedy is one of the most powerful women in Hollywood. The list of movies she has produced is impressive in both prestige and box office.

What do you think about Kathleen Kennedy’s net worth? Leave a comment below.