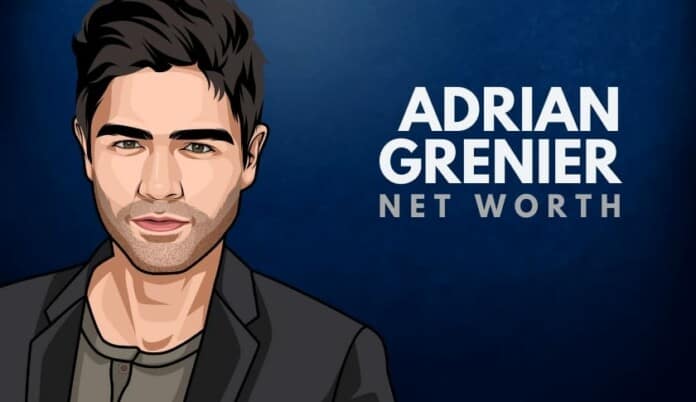 What is Adrian Grenier’s net worth?

As of December 2022, Adrian Grenier’s net worth is roughly $12 Million.

Adrian Grenier is an American actor from New Mexico.

Grenier is best known for playing Vincent Chase in the TV series ‘Entourage’ and the 2015 film. He starred in the films ‘Drive Me Crazy’, ‘The Devil Wears Prada’, and ‘Trash Fire’.

Grenier is the son of an unwed mother Karesse Grenier and her lover John Dunbar who didn’t stay in her life for long.

His father, who was from Ohio, has English, German, Indian, and Irish ancestry. His mother was from New Mexico and is of Mexican and French descent.

In 1997, Adrian Grenier started his film career, and made his film debut in ‘Arresting Gena’.

In 1999, he was featured opposite Melissa Joan Hart in ‘Drive Me Crazy’, a teen romantic comedy based on the novel ‘How I Created My Perfect Prom Date’ by Todd Strasser.

He appeared in James Toback’s ‘Harvard Man’, a crime comedy-drama thriller film in 2001. He later played Vincent Chase in ‘Entourage’, an American comedy-drama television series that premiered on HBO in 2004 and concluded in 2011, after eight seasons.

Grenier produced a television series, ‘Alter Eco’ in 2008, which premiered in June 2008. The series aired on the Discovery Channel, Planet Green. The series featured Adrian and a team of green experts and showed how to live an eco-friendly lifestyle.

In 2010, he began working on a full-length feature documentary, ‘How to Make Money Selling Drugs’, as a producer with producer Bert Marcus and director Matthew Cooke.

Here are some of the best highlights of Adrian Grenier’s career:

“It’s what we live for, to be able to make great illusions. The thing about ‘Entourage’ is everything we do is realistic. We go to the real places, we shoot on location. We get real people. It’s a perfect marriage between fact and fiction.” – Adrian Grenier

“That’s what we do on ‘Entourage.’ We embed ourselves in legitimate authentic moments so wherever the action is happening, we’re taking pieces from that red carpet.” – Adrian Grenier

“Because when you go out, and you have fun, basically you’re performing for these tabloid outlets and the paparazzi. And when you perform and create this story, they’re chuffed – they get excited, they capture it, and they put it out.” – Adrian Grenier

“I think winter wear is communal. You get some gloves and a scarf from a lost-and-found box, wash them, wear them for a while until you lose them. Then somebody else does the same thing” – Adrian Grenier

“You ask any actor – they’ll tell you they’d rather shoot on location because you don’t have to invent the energy, the energy is there.” – Adrian Grenier

Now that you know all about Adrian Grenier’s net worth, and how he achieved success; let’s take a look at some of the lessons we can learn from him:

1. Create Your Own Opportunities

If you wait for your career to come to you, it’s not going to happen. Nobody’s going to just hand you a meaningful job, including employers, your parents or professors. If you want it, go get it!

2. Take Advantage Of The Tools Available To You

Although Adrian was referring to social activism, these tools can have many uses.

Taking advantage of all of the technology and modes of communication at your disposal is critical to building your personal brand. In our time, you don’t have to wait for someone else to notice you make your mark on the world.

3. But Keep In Mind That Technology Has Its Limitations

As mentioned above, technology is a great tool – but that’s all it is. It’s not a silver bullet and it requires real dedication and effort from you to be effective.

Don’t put all your eggs in one basket, so to speak, and diversify your job-hunting strategies for the best outcome.

How much is Adrian Grenier worth?

Adrian Grenier’s net worth is estimated to be $12 Million.

How old is Adrian Grenier?

How tall is Adrian Grenier?

Adrian Grenier is an American actor, director, and producer.

He is well-known for his performance in the TV series ‘Entourage’. He owns the production company ‘Reckless Productions’ which aims to produce films with social themes.

As of December 2022, Adrian Grenier’s net worth is estimated to be roughly $12 Million.

What do you think about Adrian Grenier’s net worth? Leave a comment below.