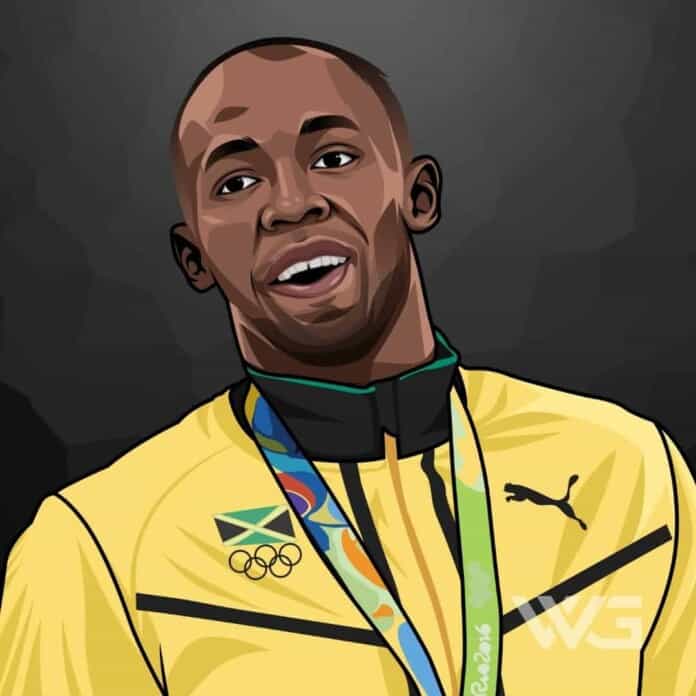 What is Usain Bolt’s net worth?

As of February 2023, Usain Bolt’s net worth is estimated to be $90 Million, making him one of the highest-paid Olympians of all time, coming just in front of Michael Phelps.

Usain Bolt is a Jamaican, world record-holding, Olympic sprinter. He is the first person to hold both the 100 metres and 200 metres world records since fully automatic time became mandatory.

Bolt was born on in Sherwood Content, a small town in Trelawny, Jamaica, on the 21st August 1986. He has two siblings, his brother Sadiki and sister Sherine. Bolt’s parents, Wellesley and Jennifer, ran the local grocery store in the rural area.

As a child, Bolt attended Waldensia Primary, where he first began to show his sprinting potential, running in the annual national primary-schools’ meeting for his parish. By the age of twelve, Bolt had become the school’s fastest runner over the 100 metres distance.

In the 2008 Beijing Olympic games, Bolt won three gold medals; and also became the first man in Olympic history to win both the 100-meter and 200-meter races in record times.

In the 2012 London Summer Olympics, Usain won another three Olympic gold medals. He ran the men’s 100-meter race in 9.63 seconds, a new Olympic record, making him the first man in history to set three world records in Olympic competition.

At the 2016 Rio Summer Olympics, he won gold in the 100-meter and 200-meter race and 4×100-meter relay, earning three gold medals at three consecutive Olympics for a total of 9 gold medals over the course of his Olympic career.

Here are some of the best highlights of Usain Bolt’s career:

“Worrying gets you nowhere. If you turn up worrying about how you’re going to perform, you’ve already lost. Train hard, turn up, run your best and the rest will take care of itself.” – Usain Bolt

“Believe in your dreams and that anything is possible.” – Usain Bolt

“There are better starters than me but I’m a strong finisher.” – Usain Bolt

“I know what I can do, so I never doubt myself.” – Usain Bolt

“I work hard, and I do good, and I’m going to enjoy myself. I’m not going to let you restrict me.” – Usain Bolt

“Win from within” – Usain Bolt

“You have to set yourself goals so you can push yourself harder. Desire is the key to success.” – Usain Bolt

View our larger collection of the best Usain Bolt quotes!

3 Keys to Success from Usain Bolt

Now that you know all about Usain Bolt’s net worth, and how he achieved success; here are 3 success lessons from Usain Bolt:

1. State Your Goals & Make Them Real

By stating your goals to others, they become a real target. Many people are scared to admit their goals and desires to their friends and family, in case they share disbelief about them.

Bolt told everyone he’d be the best sprinter in the world, and he’s proved exactly that all in good time. Don’t be afraid to state your goals to the world.

2. You MUST Want it More than the Competition

In terms of a 100M sprint, everybody is in the same position. They start at zero, and finish at one hundred. Your level of want will determine how hard you train, and how hard you run on the day.

Therefore, to beat everybody else, the only way to do it is to want it more than they do, and therefore to work harder for it.

3. Don’t Be Afraid of Anybody Else

It can be easy to become intimidated by other people. This could be for a bunch of different reasons. Maybe they’re already #1 and you’re after their spot. Perhaps they’re hating you from the sidelines.

Whatever it is, if you let people instill fear in you, it’ll have a negative effect on your overall performance.

View our larger collection of success lessons from Usain Bolt!

How much is Usain Bolt worth?

Usain Bolt’s net worth is estimated to be $90 Million.

How old is Usain Bolt?

How tall is Usain Bolt?

Usain Bolt is one of the highest-paid and most loved Olympians of all time.

What do you think about Usain Bolt’s net worth? Leave a comment below.