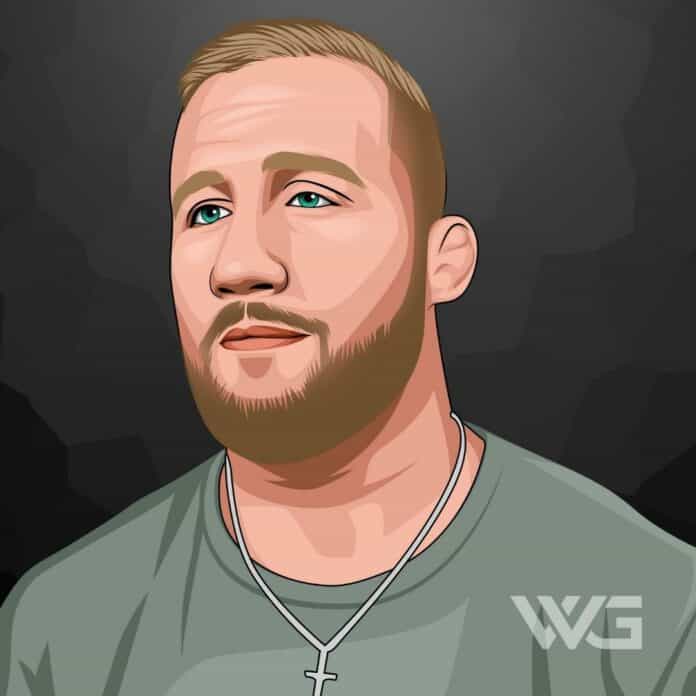 What is Justin Gaethje’s net worth?

Justin Gaethje is an American mixed martial artist who is a former interim UFC Lightweight Champion and former NCAA Division I All-American.

Prior to joining the UFC, Gaethje was a champion in the World Series of Fighting where he had a long title reign as the lightweight champion.

As of January 2023, Justin Gaethje’s net worth is estimated to be $4 Million.

Justin Ray Gaethje was born November 14, 1988, in Safford, Arizona, and attended high school in the city.

At first, Gaethje followed in the footsteps of the men in his family and was working in a copper mine as a teenager after being a high school wrestler.

The hours proved to be too much for Gaethje, and he took the wrestling knowledge he gained at Safford High School to enroll at the University of Northern Colorado.

During his All-American career at UNC, Gaethje began practicing in mixed martial arts after meeting the likes of Georges St. Pierre and Clay Guida, winning all seven of his amateur matches.

Justin Gaethje made his professional MMA debut on August 20, 2011, against Kevin Croom and won via knockout.

He started his career with 18 consecutive professional wins, including winning the World Series of Fighting Lightweight Championship

In 2017, he made his UFC debut against Michael Johnson, winning via TKO in the second round in what was called the Fight of the Year.

Justin Gaethje’s next fight would be his first loss, though, as he fell to Eddie Alvarez at UFC 218 and then lost to Dustin Poirier for his second consecutive loss.

He would rebound nicely, though, winning his next four fights against the likes of Tony Ferguson and James Vick before dropping matches to Khabib Nurmagomedov and Charles Oliveira since 2020.

Justin Gaethje started wrestling in his teenage years and learned mixed martial arts in college, but didn’t really earn much money until making it to the UFC.

In his days with WSOF and ROF, Gaethje was scraping by before earning big payouts in his MMA career.

Though he would hit a cold streak in the early 2020s, Justin Gaethje is still among the highest-paid fighters in the UFC lightweight division.

Future payouts for Gaethje will continue to easily be six figures, with the potential for over $1 million due to his track record.

Prior to joining the UFC, Justin Gaethje found himself living like most people do, surviving paycheck to paycheck.

That would change in the mid 2010s as he worked his way up the ladder and improved his MMA record, becoming a millionaire in the process.

Here’s a breakdown of Justin Gaethje’s annual estimated net worth:

Gaethje now leads a comfortable life thanks to the millions that he’s made during his MMA career.

Now one of the favorite fighters of UFC president Dana White, Gaethje will likely have a lengthy post-fighting career with the company to allow him to pad his net worth.

Justin Gaethje was raised alongside his twin brother Marcus and two sisters in Safford, Arizona where his mother was a postmaster and his father working in the Morenci copper mine.

Gaethje has never been married and doesn’t have children, saying that he’s intentionally put those life events on the backburner as he focuses on his mixed martial arts career.

He has been active in politics, supporting former United States President Donald Trump by saying that Trump helped to establish the UFC.

During his career, Gaethje has made some famous friends including Snoop Dogg and members of the Las Vegas Raiders.

Justin Gaethje started earning accolades for himself when he was a teenager and wrestling in Arizona and continued his success into adulthood.

No matter where he’s been, Gaethje has been able to rack up a long list of awards, and that includes the pinnacle of Ultimate Fighting Championship.

Here are the top awards and achievements from Justin Gaethje’s career across multiple sports:

Gaethje is hopeful that he’ll have another shot at winning the UFC Lightweight Championship, a title that he dropped in 2020.

He’s still among the highest ranked in the weight class and figures to be a force in the division for years to come.

How Does Justin Gaethje Spend His Money?

As Justin Gaethje makes his way up the ranks of the richest MMA fighters in the world, he’s amassed quite a bit of spending money.

Though he doesn’t shop for the most expensive cars in the world, Gaethje does have a nice collection that includes an Audi e-Tron, a Nissan Titan, and a Subaru WRX STI.

When staying in Miami, Gaethje and Khabib Nurmagomedov rent one of the most expensive houses in the world that overlooks Biscayne Bay and has over 7,500 square feet.

As for his permanent home, Gaethje currently lives in a modest home in Arvada, Colorado and spends a lot of time and money volunteering.

Justin Gaethje has been able to string together one highlight after another during his career that dates back to his amateur wrestling days.

The offensive wrestling style that he learned in high school has gotten him through the ranks of mixed martial arts, and he’s put together a great resume.

Here are some of the best highlights of Justin Gaethje’s career:

As he gets toward the end of his career, there are still some chances for Gaethje to make create some more highlight moments.

He’s already taken down the likes of Donald Cerrone, James Vick, and Tony Ferguson, and wants to add a couple of big names like Max Holloway before retiring.

When you’re in the UFC, there are plenty of opportunities to speak to the public when Joe Rogan approaches you with a microphone.

Gaethje has talked about his time in the octagon and life outside of it as he trains for his next fight and remains hyper-focused.

Here are our favorite quotes from Justin Gaethje:

Justin Gaethje has been one of the most focused fighters throughout his mixed martial arts career and has reached the mountaintop with the UFC.

Gaethje has found success no matter what he’s doing, from wrestling high schoolers in Arizona to fighting the top names in mixed martial arts.

Now that you know all about Justin Gaethje’s net worth, there’s plenty to learn from the former lightweight champion.

Here are some of the best success lessons to learn from Justin Gaethje:

1. Your Path Is Not Defined

Justin Gaethje didn’t follow in the footsteps of his brother, father, or his grandparents by staying in Safford, Arizona.

The men in his family all worked in the copper mines, but Gaethje had larger aspirations than working 100 hours per week in the mines.

He decided to go to college, with everyone telling him that it wouldn’t work out, but he proved them all wrong and became a UFC champion.

There aren’t many UFC fighters that have been able to maintain the type of focus that Justin Gaethje has in his career.

While many of the other fighters have gotten married of had children, Gaethje has set those aside to focus solely on his career.

That’s not the path that most people would take, or even suggest, but it’s the one that’s worked for Gaethje to this point.

There are a lot of fighters in the UFC who simply come in for the biggest paycheck and don’t respect their opponents.

Justin Gaethje is not one of those fighters, though, as he holds all of his opponents in the highest regard and studies them closely.

He hasn’t been one to make waves negatively, which has made him one of the most endearing fighters with the company.

Justin Gaethje holds an impressive MMA record during his career, including a short run as the lightweight champion.

His success has allowed him to make millions and give back to his community, with Gaethje saying he wants to get into human services after his fighting career.

The man who was told he wouldn’t amount to anything more than being a copper miner has shown that he’s one of the best fighters in the world.

As of January 2023, Justin Gaethje’s net worth is estimated to be $4 Million.

What do you think about Justin Gaethje’s net worth? Leave a comment below.