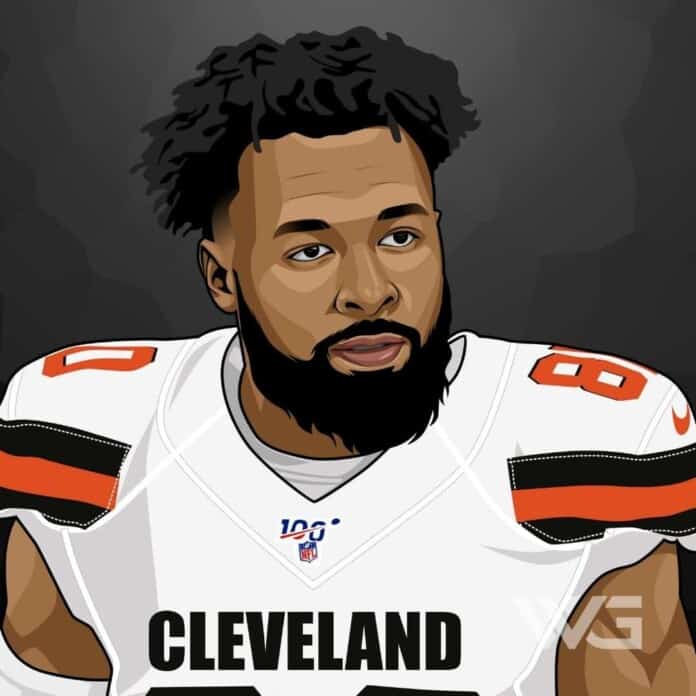 What is Jarvis Landry’s net worth?

As of February 2023, Jarvis Landry’s net worth is approximately $20 Million.

Jarvis Landry is an American football wide receiver for the Cleveland Browns of the NFL.

Landry played college football at Louisiana State University for the LSU Tigers and was drafted by the Miami Dolphins in the second round of the 2014 NFL Draft.

Jarvis Charles Landry was born on the 28th of November, 1992, in Louisiana.

Landry attended Lutcher High School in Lutcher, Louisiana, where he was a three-sport athlete in football, basketball, and track.

Landry was drafted by the Miami Dolphins in the second round of the 2014 NFL Draft.

He was the 12th wide receiver to be selected that year. As a rookie, Landry joined a receiving unit that contained Mike Wallace, Rishard Matthews, Brian Hartline, and Brandon Gibson.

Landry put together another solid season in 2016 for the Dolphins. He caught 94 passes for 1,136 yards and four touchdowns. He eclipsed the 1,000-yard mark for the second time his career, almost matching his career-high in yards from the previous season.

In 2018, the Dolphins placed the franchise tag on Landry. Despite this, it was later reported that the Dolphins had given Landry permission to seek a trade.

Here are some of the best highlights of Jarvis Landry’s career:

“In basketball, LeBron James could win a whole game by himself. [In] football, we need everybody. And when guys aren’t practicing or pushing themselves to get better, all the time, it puts a strain on other people.” – Jarvis Landry

“I almost got kicked out of school one time. I was a junior in high school. All I remember is [the principal] giving me shit about, like, being late to school or late to class or recess or P.E. I was like, “P.E., bro? Like, what the fuck I need P.E. for?” – Jarvis Landry

“It was instilled in me at an early age. My uncle had passed away, and he was just always on me. I was one of the smaller kids growing up.” – Jarvis Landry

Now that you know all about Jarvis Landry’s net worth, and how he achieved success; let’s take a look at some of the lessons we can learn from him:

1. Football Is Not A One-Man Show

Landry believes that hard work is something that gets you to where you need to be, and he knows in football it’s not a one-man game.

In order to play your best during a game, you need to ‘look good, feel good, play good.’

Ultimately, the goal at the end of the day is to win each game, regardless of how it’s done, who scores the touchdowns, who catch the passes.

How much is Jarvis Landry worth?

Jarvis Landry’s net worth is estimated to be $20 Million.

How old is Jarvis Landry?

How tall is Jarvis Landry?

Jarvis Landry is an American professional football player who was drafted #63 overall by the Miami Dolphins in the 2014 NFL Draft.

What do you think about Jarvis Landry’s net worth? Leave a comment below.