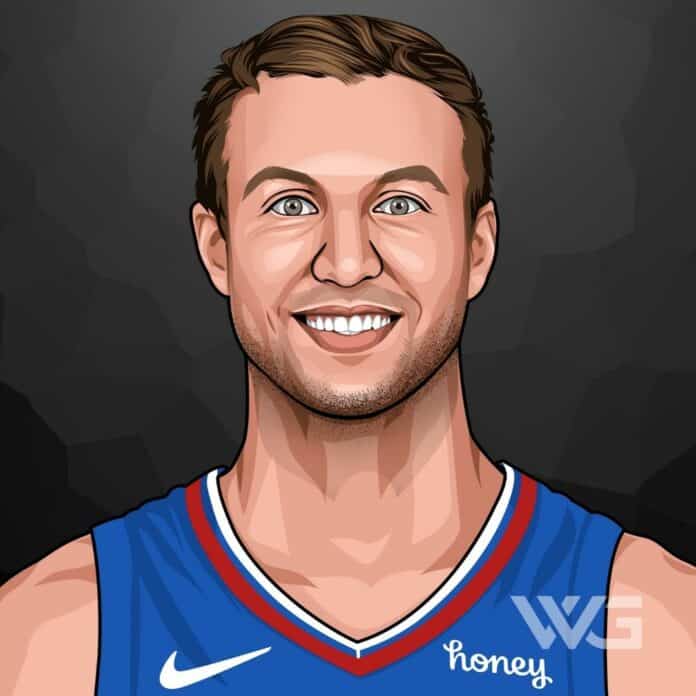 What is Luke Kennard’s net worth?

Luke Kennard is an American professional basketball player who is currently a shooting guard for the NBA’s Los Angeles Clippers.

Kennard was the 12th overall selection in the 2017 NBA Draft after spending his college career with Duke University in Durham, North Carolina.

Luke Douglas Kennard was born June 24, 1996 in Franklin, Ohio and grew up in the city.

Kennard attended Franklin High School in his hometown and was named the Ohio Gatorade Basketball Player of the Year in both his junior and senior seasons.

Those Mcdonald’s All-American seasons moved Kennard up the recruiting rankings and he was one of the top 25 prospects in high school, selecting Duke University over other offers.

Kennard played two seasons with Duke and was named an All-American and a first-team All-ACC member before declaring for the 2017 NBA Draft.

After his decorated NCAA career, Luke Kennard was drafted with the 12th overall selection by the Detroit Pistons at the 2017 NBA Draft.

By his third season, Kennard had become a starter with Detroit and averaged nearly 16 points per game, but it would be his last season with the Pistons.

At the beginning of the 2020-21 NBA season, Kennard was involved in a three-team trade that sent him to the Los Angeles Clippers where he has played ever since.

Since Luke Kennard was selected in the first round of the 2017 NBA Draft, his contract was predetermined before the Pistons called his name.

Kennard’s salary was structured as part of his rookie contract, but the deal he signed with the Clippers as part of his extension saw a massive increase in his salary.

The figures of Luke Kennard’s earnings are based on his publicly announced contracts, but are not guaranteed to be 100% accurate.

Following the 2022-23 NBA season, Kennard will have two years left on his contract with the Los Angeles Clippers.

In the 2023-24 season, Kennard will be making a guaranteed $14.7 million and the has an option for an identical amount for the following season should they choose to keep him.

Luke Kennard was one of the top prospects coming out of Duke University so his net worth was going to be high as a first-round pick.

Upon being selected 12th overall, Kennard was already worth millions, and he’s added to his net worth considerably since then.

The figures of Luke Kennard’s net worth are estimated in regard to his NBA salaries and endorsements and are not guaranteed to be 100% accurate.

Here’s a breakdown of Luke Kennard’s annual net worth:

Kennard is guaranteed to make at least $14.7 million with the remainder of his contract with the Los Angeles Clippers with the potential for more.

In 2024, Kennard is due to be given a qualifying offer, meaning that he’ll be eligible to make more if a team offers more than the Clippers are willing to give.

Luke Kennard is the son of Mark and Jennifer Kennard, with his father being a former college basketball player that taught him the game.

Kennard was once in a relationship with reality TV star Savannah Chrisley, and he is now married to Anna Castro.

In 2021, Kennard and Castro announced their engagement and were married the next year, with the couple having no children currently.

Kennard was a five star recruit coming out of high school, and lived up to the billing while attending Duke.

Though the amount of awards at the professional level hasn’t matched his high school and college years, Kennard is still achieving a lot in the NBA.

Here are some of the awards and achievements from Luke Kennard’s career:

Kennard is considered to be one of the best basketball players in Ohio history, which is high praise when you consider it’s the same state that produced LeBron James and John Havlicek.

One of the biggest achievements that Kennard is hoping to add to his resume is NBA champion, with the Los Angeles Clippers giving him his best shot so far.

How Does Luke Kennard Spend His Money?

While not among the most expensive houses in the world, Kennard did spend a whopping $5.5 million on his home in the Los Angeles neighborhood of Tarzana.

Outside of his beautiful house, Kennard doesn’t have many large expenditures, staying away from the most expensive cars and clothing.

Earning a huge contract from Steve Ballmer and playing for one of the NBA’s richest teams, Kennard is already set for life and will have millions more coming over the next few years.

Luke Kennard started playing basketball at a young age following his father’s college basketball career and has a long list of achievements.

Throughout high school, college, and the NBA, there have been some memorable moments and performances that Kennard has had.

Here are some of the best highlights of Luke Kennard’s career:

Kennard figures to have a long NBA career ahead of him, especially thanks to his three-point shooting abilities.

Winning an NBA Finals proves to be the last big highlight that Kennard is searching for, which is the ultimate goal for any player.

From a young age, Luke Kennard was heralded as a future basketball star, but didn’t let that get to his head.

Kennard has never been shy with the media and has said what’s on his mind regarding basketball and any topic that comes to his mind.

Here are our favorite quotes from Luke Kennard:

Very few high school basketball players have been heralded as highly Luke Kennard, though he would still have to prove himself at a higher level.

Instead of failing to live up to the hype, Kennard exceeded his college basketball expectations and established a career for himself in the NBA.

Now that you know all about Luke Kennard’s net worth, there are plenty of life lessons to take away from the former high school superstar.

Here are some of the best success lessons to learn from Luke Kennard:

Luke Kennard could’ve coasted into college basketball thinking that he would easily dominate after his impressive high school career.

Instead, Kennard practiced hard while at Duke and set his sights on improving to the point of becoming an NBA player.

When he reached the highest level of basketball, Kennard continued working on improving his game instead of focusing on past achievements and has earned the respect of his teammates.

2. Surround Yourself With The Right People

While growing up, Luke Kennard has had a solid supporting system that includes his parents Mark and Jennifer Kennard that knew he was destined to become a star.

The result was Kennard becoming one of the top players in the Atlantic Coast Conference, which led to him being one of the first players drafted into the league in 2017.

3. Take Opportunities When They Come

Following his sophomore season at Duke, Luke Kennard could have returned to improve his draft stock, but jumped at the opportunity to declare for the NBA.

At just 21 years old, Kennard was one of the younger players in the NBA, but received plenty of playing time in his first season.

There’s no telling what would’ve happened had Kennard stayed at Duke, and taking the right opportunity at the right time has helped him tremendously.

Luke Kennard has had one of the finest basketball careers in his path from high school superstar to NBA role player.

Now a veteran who has been in the league for years, Kennard has the role of advising younger talent on how to operate as part of a team.

Kennard is searching for his first NBA championship, and the Clippers roster gives him a shot at winning a title.

What do you think about Luke Kennard’s net worth? Leave a comment below.