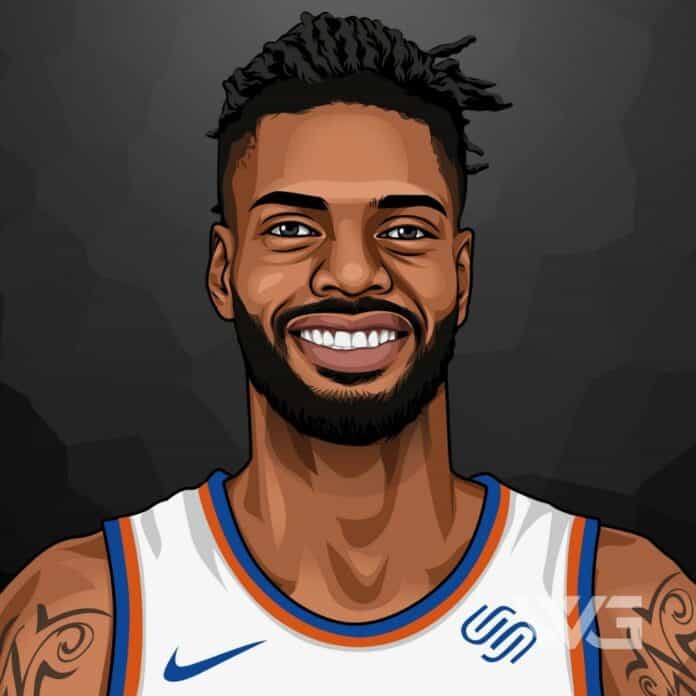 What is Nerlens Noel’s net worth?

Nerlens Noel is an American professional basketball player who has been playing in the NBA since 2013.

Having been ranked as a five-star prospect out of high school, Noel quickly rose through the ranks to become one of the most sought-after players in the game.

Although he has been playing for over a decade, he has no plans to retire anytime soon, and we expect to see much more from him in future seasons.

Nerlens Noel was born April 10, 1994, in Malden, Massachusetts, and he was born to Haitian immigrant parents.

He spent his first two years of high school at Everett High School before transferring to Tilton School in New Hampshire.

Shortly before graduating, The New York Times described him as one of the best shot blockers of his generation, and ESPN ranked him as a five-star recruit.

While many colleges wanted him, thanks to his remarkable high school basketball career, he chose to attend the University of Kentucky, where he was named the SEC Freshman of the Year.

However, Noel chose to stay with the Kentucky Wildcats for only a single season before declaring himself for the 2013 NBA draft.

Nerlens Noel was selected by the New Orleans Pelicans as their sixth overall pick, but on the same day, his rights were traded to the Philadelphia 76ers in exchange for Jrue Holiday and Pierre Jackson.

While he was meant to start playing in the 2013-14 season, he ended up missing the entire season due to recovering from knee surgery.

Ultimately, he made his NBA debut in October 2014, and the following year he participated in the Rising Stars Challenge as a part of Team USA.

His contract was extended through the 2016-17 season, but in 2016 he was out for five weeks due to another knee injury that required surgery.

Fortunately, in 2017, he was able to make his first start of the season in place of Joel Embiid, who was out due to injury. However, a month later, he was traded to the Dallas Mavericks for Justin Anderson and Andrew Bogut.

He would play a single season for the Mavericks, though he would end up missing 42 games due to a torn ligament in his left thumb.

In 2018, he signed a two-year contract with the Oklahoma City Thunder but faced even more injuries, including a concussion that forced him to be removed from the court on a stretcher.

Noel then joined the New York Knicks in 2020 and remained with them until 2022, when he was traded with Alec Burks to the Detroit Pistons in exchange for Nikola Radicevic.

Nerlens Noel may not be as wealthy as Dikembe Mutombo or Kevin Durant, but he has still earned a substantial amount of money during his career.

Although his average salary has fluctuated as he’s changed teams, he has consistently earned millions each year from the NBA.

While he currently isn’t one of the highest-paid players on the Pistons, he has enjoyed a significant boost in his overall salary since joining them.

If he remains with the Pistons, it is very likely we will see his salary and net worth continue to climb.

Nerlens Noel is rumored to be in a relationship with Jordan Walsh, though he has never confirmed or denied the connection.

He also has a son with a previous girlfriend and was embroiled in a bit of controversy in 2014 when he refused to pay child support until his paternity was confirmed. Once the DNA results were back, Noel sought to pay the minimum level of support.

On his official Instagram account, he has also posted recent photos of another child, Nehemiah, though Noel has offered no information about whether or not it is his son.

Like Marvin Bagley III and Luka Doncic, Nerlens Noel has earned a significant number of honors and awards during his career.

While he has earned many accolades, we’ve chosen to highlight the ones that have been the most prestigious.

Here are some of Nerlens Noel’s most important career awards and achievements:

Although these are only a few of the honors he has received, they are the most significant overall.

As he continues with his career, we expect to see him earn many more distinctions in the future.

How Does Nerlens Noel Spend His Money?

Fans got a glimpse of Nerlens Noel’s home in 2016 when he showed it off in an interview with Barstool Sports.

While he never stated how much the house itself cost, we do know that it has a rock climbing wall and a full-size basketball court. It may not be one of the biggest houses in the world, but that is pretty impressive.

Noel may not be one of the highest paid athletes in the world, but he is certainly living a very luxurious life.

Nerlens Noel has accomplished much during his time on the court that has helped make him a standout player.

However, we’ve chosen to highlight the milestones he’s reached that have impacted his fame and fortune the most.

Here are some of the best highlights of Nerlens Noel’s career:

While Nerlens Noel isn’t as decorated as Kevin Garnett or DeMar DeRozan, he has still reached many important milestones as a player.

We certainly expect to see him achieve much more in future seasons as he continues his career in the NBA.

There is a lot that we can learn from Nerlens Noel and his successful career as a professional basketball player.

Now that you know all about Nerlens Noel’s net worth, we can take a closer look at what he can teach us about finding our own success.

Here are some of the best success lessons to learn from Nerlens Noel:

1. Surround Yourself With Support

Although you can try to take on everything on your own, this almost always ends in burnout, which can ruin your motivation and make it harder to get ahead.

To prevent this, you should surround yourself with people who can help you bear the load. You should also look for people with skills that complement your own so that you can work as a more effective team.

If you want to become successful, you should consider what your passions are and how you can utilize them to achieve your goals.

By being able to make use of the things you are passionate about, you will be much more likely to stay motivated to continue making progress.

There are many reasons why people often give up on the journey to success, but this is something you have to avoid at all costs if you want to get ahead.

Yes, the process isn’t going to be easy, but it is something that you must learn to face if you want to achieve your goals.

Nerlens Noel has built himself up to be a very successful professional basketball player, and his fame and wealth are only increasing with every season.

Fortunately, he has no plans to leave the court anytime soon, so he is expected to continue making a name for himself for many more years to come.

Make sure to check back often so you won’t miss any important updates to Noel’s ongoing career and growing fortune.

What do you think about Nerlens Noel’s net worth? Leave a comment below.