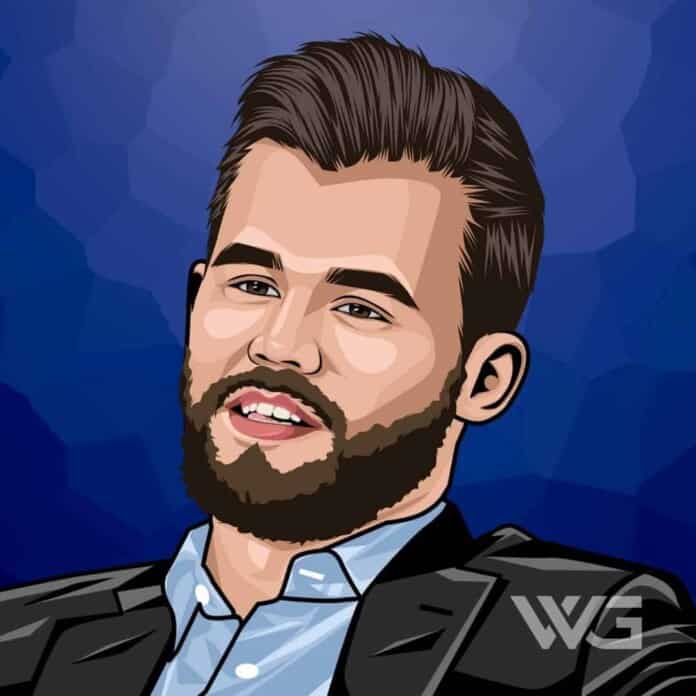 What is Magnus Carlsen’s net worth?

As of February 2023, Magnus Carlsen’s net worth is approximately $50 Million.

Magnus Carlsen is a Norwegian chess grandmaster and the current World Chess Champion from Vestfold, Norway.

Sven Magnus Øen Carlsen was born on the 30th of November, 1990, in Tønsberg, Vestfold, Norway. His parents, Sigrun Øen and Henrik Albert Carlsen, are engineers by profession.

He started displaying his intellectual capabilities when he was still a toddler. At the age of two, he could solve 50-piece jigsaw puzzles all by himself and proceeded to assemble Lego sets meant for much older children at the age of four.

The same year, he defeated former world champion Anatoly Karpov at a blitz chess tournament and went on to achieve one draw against Garry Kasparov, who was then the top-rated player in the world.

He finished second place at the Dubai Open Chess Championship in April 2004 and became a Grandmaster. At the time, he was the world’s youngest Grandmaster, and the third youngest person ever to hold GM status.

He faced several formidable opponents in the prestigious Linares chess tournament in 2007, which many consider being the “the Wimbledon of chess”.

Carlsen won the championship 6½–3½ by winning games five, six, and nine and drawing the remainder. Thus he became the new world chess champion, the second-youngest player (after Kasparov) to win the world title.

Here are some of the best highlights of Magnus Carlsen’s career:

“What I admired most about him [Bobby Fischer] was his ability to make what was in fact so difficult to look easy to us. I try to emulate him.” – Magnus Carlsen

“Of course, analysis can sometimes give more accurate results than intuition but usually it’s just a lot of work. I normally do what my intuition tells me to do. Most of the time spent thinking is just to double-check.” – Magnus Carlsen

“I started by just sitting by the chessboard exploring things. I didn’t even have books at first, and I just played by myself.” – Magnus Carlsen

“One of the things that first attracted me to chess is that it brings you into contact with intelligent, civilized people – men of the stature of Garry Kasparov, the former world champion, who was my part-time coach.” – Magnus Carlsen

“All I expect are wins and to get pleasure from the game. And if someone thinks something about me, if someone’s dissatisfied with something… that’s not my headache. I hope someday I’ll become World Champion – and I’ll make all these people happy. But even if for some reason that doesn’t happen it won’t stop me from getting pleasure from chess. I’m sure of that.” – Magnus Carlsen

Now that you know all about Magnus Carlsen’s net worth, and how he achieved success; let’s take a look at some of the strongest lessons we can learn from him about chess:

Try to have fun with chess learning. You need to enjoy what are you doing and this can motivate you to learn and train better in chess.

2. You Can Learn From Almost Every Game

You will and can learn chess from every game and everyone that you meet in the game. Stay focused.

Chess takes a lot of focus. Take regular breaks sometimes. Train your body as well as your mind.

How much is Magnus Carlsen worth?

Magnus Carlsen’s net worth is estimated to be $50 Million.

How old is Magnus Carlsen?

How tall is Magnus Carlsen?

Magnus Carlsen is a Norwegian chess player who won the World Chess Championship in 2013, becoming the second-youngest world chess champion at age 22.

As of February 2023, Magnus Carlsen’s net worth is estimated to be roughly $50 Million.

What do you think about Magnus Carlsen’s net worth? Leave a comment below.