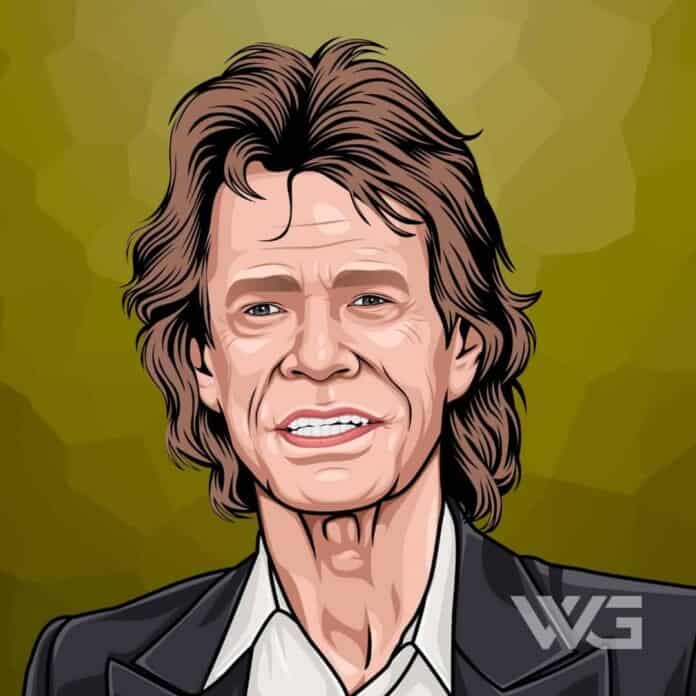 What is Mick Jagger’s net worth?

This legendary English singer, songwriter, actor, and film producer is one of the most recognizable rock stars on the planet, with a career spanning over six decades.

Known for his distinctive style and outlandish energy, Jagger has made millions as a counterculture figure and inspired many other musicians to follow in his footsteps.

After leaving school, Jagger and Richards moved into a flat in Chelsea, along with guitarist Brian Jones.

While Jagger had started studying finance and accounting at the London School of Economics, he ultimately started a band with Jones and Richards that became the foundation of the Rolling Stones.

As one of the Rolling Stones founders, Mick Jagger was also responsible for writing some of the band’s biggest hits.

The band got their first gig in 1962, and by 1963, they had taken off as a force to be reckoned with in the music industry.

Since they started out in the 1960s, the Rolling Stones were at the forefront of the British Invasion and quickly became associated with rebellion and counterculture.

Mick Jagger was instrumental in incorporating the blues into rock and roll, and their unique sound has inspired generations of musicians.

Throughout his time with the Rolling Stones, Jagger released over 100 albums, including 30 studio albums.

Jagger and the band have also played over 2000 concerts around the world, generating an estimated $1.5 billion between 1989 and 2001.

As a solo artist, Mick Jagger established himself with the album, She’s The Boss, which he released in 1985.

During this time, Jagger also collaborated with The Jacksons, performing the lead vocals on the song “State of Shock” alongside Michael Jackson.

In 2011, Jagger announced he was creating a new supergroup with Dave Stewart, Joss Stone, A.R. Rahman, and Damian Marley, intending to fuse their unique musical styles together.

As of 2022, Jagger is still touring with the Rolling Stones, bringing in millions with every show he performs.

As one of the richest rock stars in the world, it’s safe to say that Mick Jagger makes a lot of money every year.

What we know about his earnings includes:

Mick Jagger has created a lot of ways for himself to earn money, and it is unlikely that we will ever see his net worth drop.

Mick Jagger has been married and divorced only once to Biance Perez-Mora Macias but has been linked with various other partners, including Jerry Hall, L’Wren Scott, and Melanie Hamrick.

While Jagger was known to party hard throughout his career, he is also an avid cricket fan and has regularly attended the FIFA World Cup games as a supporter of the English National football team.

While he hasn’t released one of the most expensive NFTs ever created, his collaboration with the 3D artist Extraweg has turned heads.

As a founder and lead singer of the Rolling Stones, Mick Jagger has received many awards and honors throughout his career.

Here are some highlights from Mick Jagger’s career:

How Does Mick Jagger Spend His Money?

Mick Jagger certainly knows how to party like a rock star, but he also can spend his money like one.

Jagger has a ton of assets that he has spent money on, including a $2 million dollar home in Florida, a private Caribbean island, and a castle in the south of France that he bought in 1982 for $3 million.

In addition to this, Jagger also owns homes in New York, London, and Los Angeles, though he possibly owns even more properties that aren’t publically known.

Mick Jagger is also an avid car collector, with many of the most expensive cars in the world in his possession.

His cars include a Rolls Royce Silvercloud III, an Aston Martin DB6, and a Mercedes s550.

Mick Jagger has reached a lot of amazing milestones throughout his six-decade-long career.

Here are some of the best highlights of Mick Jagger’s career:

Mick Jagger certainly has a way with words, and throughout his career, he’s said quite a few things that stand out.

Here are our favorite quotes from Mick Jagger:

Now that you know all about Mick Jagger’s net worth, we can look at some of the important lessons about success that his incredible career can teach us.

Here are some of the best success lessons to learn from Mick Jagger:

As a counterculture figure, Mick Jagger has been on the receiving end of many haters throughout the years, but that has done little to stifle his success.

This is an important lesson for anyone trying to get ahead because there are always going to be haters, but your reaction to them is what will make or break you.

While it can be hard to ignore sometimes, the best thing you can do is ignore the ones with nothing good to say because, at the end of the day, it’s not their picture that’s hanging above your mantel.

2. Your Past Isn’t Your Present

Early in his career, Mick Jagger was known for his drug abuse but has since gotten help and gotten clean.

Everyone has a past, and it’s important not to let past mistakes hold you back and define who you are now.

Recognize the bad, learn from your mistakes and move on strong, smarter, and even more successful.

You’ll never get ahead by giving less than your all, and no one has ever failed by giving something their all.

Everything is worth giving 110% to if it has the potential to get you closer to your goals.

So be bold, work hard, and keep on your grind because it will all pay off once you reach the top.

Mick Jagger is a rock and roll legend, and the Mick Jagger net worth is something all musicians aspire to.

As the lead singer of the Rolling Stones, Mick Jagger changed the music industry and accumulated an astonishing net worth that is still increasing today.

Be sure to check back regularly for updates, as we’re sure this rock star’s net worth is only going to keep getting larger by the year!

What do you think about Mick Jagger’s net worth? Leave a comment below.