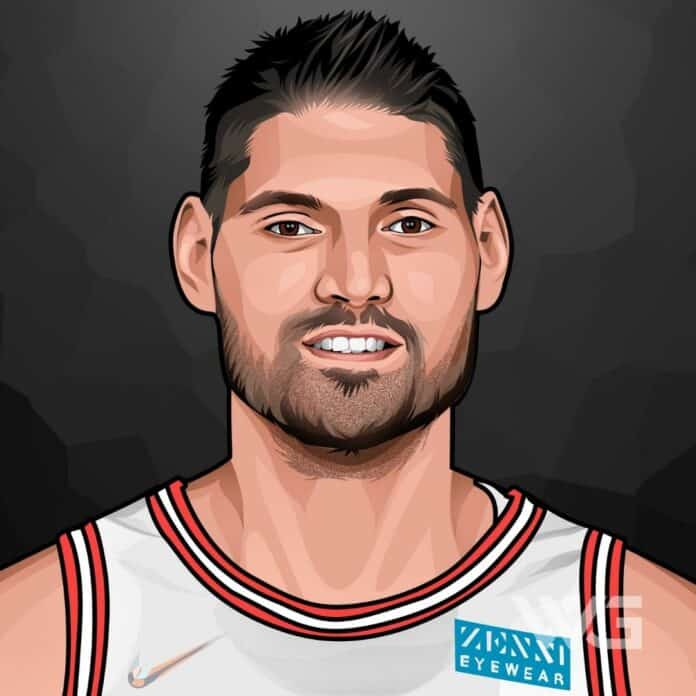 What is Nikola Vucevic’s net worth?

Nikola Vucevic is a Montenegrin professional basketball player who is currently a center for the NBA’s Chicago Bulls.

Vucevic was the 16th overall selection in the 2011 NBA Draft after spending his college career with the University of Southern California.

As of February 2023, Nikola Vucevic’s net worth is estimated to be $120 Million.

Nikola Vucevic was born 24 October 1990 in Morges, Switzerland and moved to several cities in Europe as a child.

His father Borislav Vucevic played professionally in Europe that was also appeared on the Yugoslavian national team and taught his son the game at a young age.

Vucevic was a rising star at the junior level, and moved to the United States as a teenager when it was clear his future was in basketball.

He attended Stoneridge Prep for high school and committed to the University of Southern California, playing three seasons with the Trojans before declaring for the 2011 NBA Draft.

Vucevic was the 16th overall selection in the draft by the Philadelphia 76ers, but he only played one season with the team.

In August 2012, Vucevic was part of a trade that sent Dwight Howard to the Los Angeles Lakers, with Vucevic joining the Orlando Magic and becoming a staple of the team.

Vucevic became a two-time All Star with Orlando, spending nearly nine full seasons with the team before he was traded once again, this time to the Chicago Bulls in March 2021.

He has been a member of the Bulls ever since, becoming an instant starter with the team and averaging 17.6 points per game in his first season.

Nikola Vucevic was already earning a few million over his first few years in the NBA, but his salary skyrocketed in 2015 when signing with one of the richest NBA teams, the Orlando Magic.

The Magic gave Vucevic a four-year deal worth $53 million, and he then signed a four-year, $100 million extension that continues to net him big money.

The figures of Nikola Vucevic’s earnings are based on his publicly announced contracts, but are not guaranteed to be 100% accurate.

Nikola Vucevic is in the final year of his contract with the Chicago Bulls, and will become an unrestricted free agent after the 2022-23 campaign.

Vucevic will be able to sign with any team that he wants, and should still get a big contract offer since he continues to produce at a high level.

Nikola Vucevic started off his career making decent money in the NBA, but his net worth really took off when he signed with the Orlando Magic.

Since then, Vucevic has increased his net worth to nine figures and is likely to keep adding onto it over the next several years.

The figures of Nikola Vucevic’s net worth are estimated in regard to his NBA salaries and endorsements and are not guaranteed to be 100% accurate.

Here’s a breakdown of Nikola Vucevic’s annual net worth:

Vucevic is set to be a free agent following the 2022-23 season, which may be good news for his net worth, assuming he’s healthy.

There hasn’t been a drop in Vucevic’s production despite now being in his 30s, so he’s likely to sign another significant contract.

Nikola Vucevic is the son of Ljiljana and Borislav Vucevic, and was raised alongside his sister Biljana Vucevic.

Nikola Vucevic was a highly sought after recruit during his high school years since he was already a decorated player.

When he got to college, Vucevic continued to add awards onto his resume, and has been able to keep it going in the NBA.

Here are some of the awards and achievements from Nikola Vucevic’s career:

In this history of the NBA, there have only been 302 players that have been selected for multiple NBA All Star Teams.

Vucevic is one of those players, and he’s hoping to add a third that would put him into an even rarer category of players.

How Does Nikola Vucevic Spend His Money?

Vucevic is close to being one of the richest NBA players in the world due to his contracts paying him tens of millions of dollars.

Though not among the most expensive cars in the world, Vucevic does drive around in style with a new Audi RS5 that’s estimated to be $80,000 brand new.

Vucevic lives in a home that isn’t one of the most expensive houses in the world, but did cost him a lot of money.

In 2022, Vucevic purchased a six bedroom mansion in Chicago’s Lincoln Park for nearly $5 million, and the house features an elevator and a roof deck.

Nikola Vucevic was already a standout in Europe before moving to the United States as a teenager and has continued to accomplish a lot in as a basketball player.

Vucevic’s life has been filled with tremendous highs from being one of the best players in a competitive college conference to being named to the NBA’s list of elite players.

Here are some of the best highlights of Nikola Vucevic’s career:

Not many people can say that they’ve been named an NBA All-Star, which puts Vucevic next to some legendary names like Michael Jordan or Larry Bird to name a few.

Vucevic is hoping that he can lead the Bulls to win an NBA Championship, which he would consider to be the top highlight in his career.

Nikola Vucevic has been around the world and experienced a lot for someone that’s still only in the early 30s.

Never afraid to speak his mind, Vucevic has talked about his life experiences and what it’s like to be in professional basketball.

Here are our favorite quotes from Nikola Vucevic:

Nikola Vucevic had to grow up pretty quickly since he spent so much time moving across the world, and has had plenty of life experiences.

Vucevic has been highly successful throughout his life, and has been a great teammate for those around him due to his real-life knowledge.

Now that you know all about Nikola Vucevic’s net worth, there’s a lot that you can take away from his career both on and off the court.

Here are some of the best success lessons to learn from Nikola Vucevic:

Nikola Vucevic could have stayed in Europe when he was a teenager and become a prominent player in the continent, but he had loftier goals.

While still in school, Vucevic and his family packed up and headed to the United States due to his aspirations of making it to the NBA.

Vucevic attended a major college, and wound up living out his dreams after becoming a first-round draft pick and hasn’t looked back.

Vucevic didn’t make the jump to the NBA after one year in college like a lot of his fellow All Stars, instead spending three years at USC before going to the draft.

That meant that Vucevic was a bit of a late-bloomer, and he knows that you don’t have to be great right away to end up being great.

Even in his 30s, Vucevic is an improved player in some aspects of his game, saying that there are always new things to learn without worrying if you’re too old.

3. You Don’t Have To Impress Everyone

Nikola Vucevic knows this because he had to wait until the 16th overall selection before he was drafted as he impressed the 76ers front office.

Though he wouldn’t stick around in Philadelphia for very long, the Orlando Magic saw enough of his talents to know that he could be a cornerstone for their franchise.

Nikola Vucevic proved to be one of the best players in Orlando Magic history, and is still producing at a high level for the Bulls.

Vucevic is one of the most well-traveled players in the league, spending time in several countries around the world and several cities in the NBA.

Though he’s won a league championship in Europe, Vucevic is searching for his first NBA title before retirement.

As of February 2023, Nikola Vucevic’s net worth is estimated to be $120 Million.

What do you think about Nikola Vucevic’s net worth? Leave a comment below.