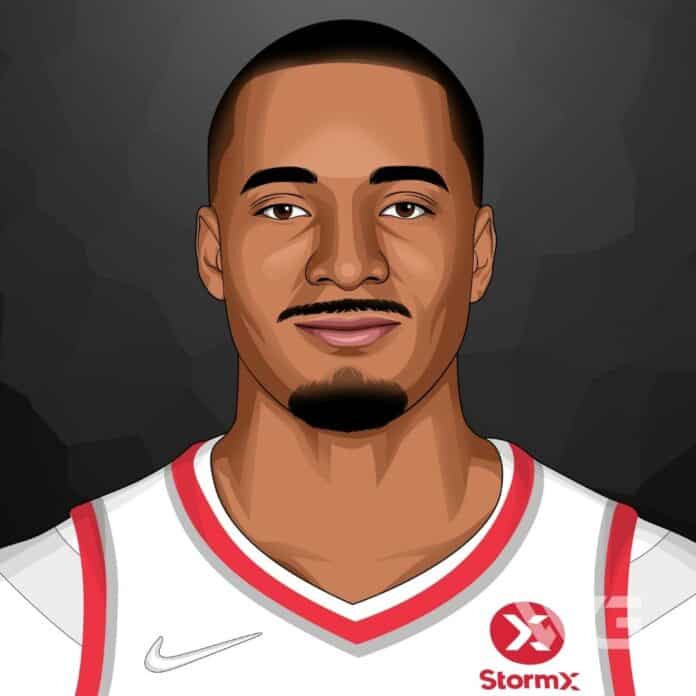 What is Norman Powell’s net worth?

Norman Powell is an American professional basketball player who is currently a shooting guard for the NBA’s Los Angeles Clippers.

Powell was the 46th overall selection in the 2015 NBA Draft after spending his college career with the University of California, Los Angeles.

As of February 2023, Norman Powell’s net worth is estimated to be $45 Million.

Powell’s uncle Raymond Edwards taught him how to play at a young age and he became a standout at Lincoln High School, helping the team win several championships.

During his high school career, Powell was named to the all-state team in California and was one of the highest-rated shooting guards in his class.

Powell was a four-star recruit and received several scholarship offers, ultimately choosing the University of California, Los Angeles for his college basketball career.

Norman Powell played for four seasons at UCLA, and was named as a First-Team All-Pac-12 member in his senior year (2015).

Following his college career, Powell was drafted with the 46th overall selection by the Milwaukee Bucks, but was immediately traded to the Toronto Raptors.

Powell was placed into the same roster that featured Kyle Lowry and DeMar DeRozan while playing for Toronto.

During his first couple of seasons as a professional, Powell received significant playing time and earned more starting opportunities in the 2019-20 NBA season.

Powell had a fine start to the 2020-21 season and was dealt to the Portland Trail Blazers before the trade deadline for Gary Trent Jr. and Rodney Hood.

The following season, Powell was traded once again, this time to the Los Angeles Clippers along with Robert Covington for three players to play with Kawhi Leonard for a second time.

During the early parts of his career with the Toronto Raptors, Norman Powell was making slightly above the league minimum, but then signed a massive deal.

Within just the span of a few months, Powell went from making slightly over $1 million to earning an average of eight figures per year.

The figures of Norman Powell’s earnings are based on his publicly announced contracts, but are not guaranteed to be 100% accurate.

Norman Powell’s salary is set to increase over the length of his current contract with the Los Angeles Clippers that goes through the 2025-26 season.

During the final season of his contract, Powell will be making just north of $20.4 million before becoming an unrestricted free agent.

Though he was getting a solid salary early in his career, Norman Powell wasn’t able to add much to his net worth.

That would change significantly with the signing of his new contract before the 2018-19 season, though, and he’s established a solid net worth for himself as a result.

The figures of Norman Powell’s net worth are estimated in regard to his NBA salaries and endorsements and are not guaranteed to be 100% accurate.

Here’s a breakdown of Norman Powell’s annual net worth:

As you can see, Powell’s net worth increased dramatically with the signing of his new contract before the 2018-19 season and has gone up ever since.

With several years and tens of millions of dollars remaining on his contract, Powell’s net worth will continue to increase and his finances are secured for life.

Norman Powell grew up with his older sisters Margaret and Joniece Powell and was raised by his parents Norman Sr. and Sharon Powell in San Diego.

Powell has never been married, doesn’t have children, and is currently believed to be single while keeping his dating history private.

In addition to basketball, Powell is an aspiring rapper and and released his first single titled “No Problem” in 2017, joining the likes of Ish Smith and Damian Lillard as players to release singles.

Norman Powell was earning several awards while he was in high school and was recognized as one of the best basketball players in California.

Powell was a four-star recruit coming out of high school and had several choices on where to play his college career.

While Powell hasn’t received a long list of individual honors at the professional level as he did in high school or college, Powell has accomplished a lot.

Here are some of the awards and achievements from Norman Powell’s career:

From all of these accomplishments, winning an NBA Championship as a member of the Raptors remains his favorite.

Now, Powell is hoping he can join the much shorter list of players to win championships with multiple franchises.

How Does Norman Powell Spend His Money?

As he works his way to becoming one of the richest NBA players in the world, Powell’s breakthrough has earned him a lot of spending money.

Powell is still waiting to buy one of the most expensive cars in the world, but did drop big money on a brand new 2020 Range Rover for his money estimated to be nearly $100,000.

Just before he got traded from Portland to one of the richest NBA teams, Powell mentioned that he had purchased a house in Oregon, though he didn’t reveal the price.

Instead of wearing other designers’ clothes like some of the other Clippers that play for Steve Ballmer, Powell wears his own fashion line to games with t-shirts that sell for around $23.

Typically, playing in college for the full four years of eligibility and being drafted in the second round doesn’t translate to a long NBA career.

Thankfully, that hasn’t been the case for Norman Powell, who outperformed the expectations that were set for him as a rookie and he has achieved a lot professionally.

Here are some of the best highlights of Norman Powell’s career:

Still in the prime of his career, the San Diego native has accomplished a lot since 2015 and is hoping to add more individual awards.

At the same time, Powell knows the feeling of winning an NBA Championship and wants to earn multiple titles before retirement.

Norman Powell was never expected to be an impact player in the NBA due to his draft status, but he’s now a champion that’s been a mainstay for years.

During his career, Powell has been one of the most tenacious players and his infectious attitude has made him a locker-room favorite with a lot on his mind.

Here are our favorite quotes from Norman Powell:

Norman Powell was able to overcome the odds of being perceived as a player that sits at the end of the bench to become an NBA starter.

An NBA champion, Powell has felt the highest of highs throughout his career and knows what it’s like to be sent down to the lower professional level.

Now that you know all about Norman Powell’s net worth, there is a lot to learn from the former second round pick that became a star.

Here are some of the best success lessons to learn from Norman Powell:

The motto of “keep grinding” has always been something that’s stuck with Norman Powell throughout his career.

Powell focuses on getting better every day, continuing to practice even when everyone else has left the gym to work on his skills as a shooting guard.

In fact, the fashion line that Powell released is named Understand the Grind, serving as a daily reminder to keep plugging away and achieving your goals.

One of the reasons that Powell has been able to stick around in the league for so long and find success with multiple times is his versatility.

Instead of being set in his own ways as a player, Powell is willing to adjust his game and take advice from coaches to get better and improve his team.

The same type of versatility can allow you to find success in anything, especially in a working environment, whether it’s basketball or accounting.

Norman Powell has shown that you have to continue to work on improving yourself, and it’s important to know that you’re the best investment you can make.

Powell has bet on himself repeatedly, knowing that one day he would breakthrough in the NBA, but still says that he hasn’t hit his peak.

Instead, Powell says that we have yet to see the best of him, and he continues to make his way toward stardom and he knows there’s big money in his future as a result.

Norman Powell was originally tabbed as a “fringe” player in the NBA but has instead received significant playing time throughout his career.

Powell was instrumental in helping the 2018-19 Toronto Raptors win the first title in franchise history, and he keeps adding to his legacy.

In terms of individual accomplishments, becoming an NBA All-Star for the first time is next on Powell’s list.

As of February 2023, Norman Powell’s net worth is estimated to be $45 Million.

What do you think about Norman Powell’s net worth? Leave a comment below.