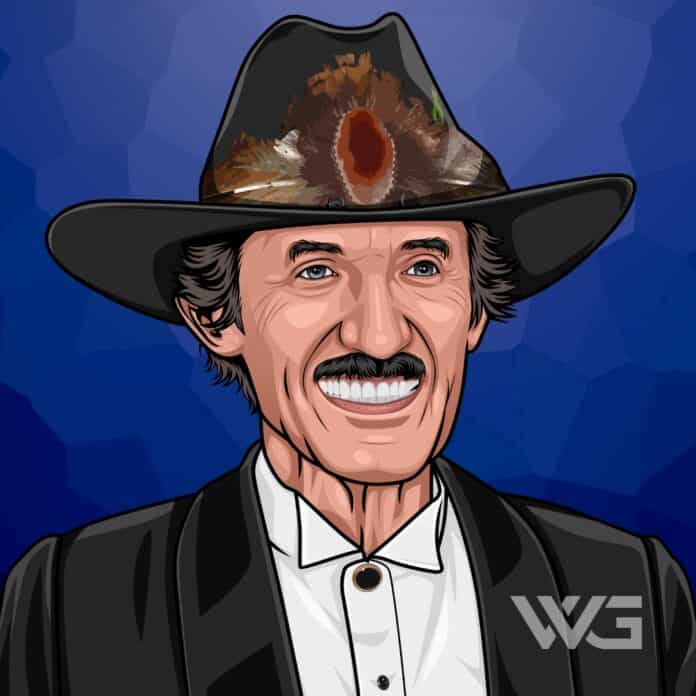 What is Richard Petty’s net worth?

Richard Petty is a retired stock car racing driver from the United States, who, in the 1950s, began racing for NASCAR and quickly gained the nickname “The King.”

As of January 2023, Richard Petty’s net worth is estimated to be $65 Million.

He was the son of Elizabeth and NASCAR racer, Lee Petty and attended Randleman High School as a child.

Richard was an All-Conference guard on the football team and after finishing high school, Petty enrolled in a course at Greensboro Junior College.

Petty started his NASCAR career in a race at Toronto’s CNE Stadium not long after turning 21 in 1958.

He became successful right away and was voted 1959 NASCAR Rookie of the Year to everyone’s surprise.

In the 1960s, Petty was making about $40,000 while he was still striving to advance his abilities and take the top spot as a driver.

He competed in the “NASCAR Grand National Points Race,” where he came in second, as his first professional competition.

His breakthrough year was 1963, when he won races in Martinsville and Bridgehampton, proving his ability as a race winner.

In 1964, Petty maintained his winning streak by taking home his first Grand National Championship and first Daytona 500. Due to the Chrysler boycott of NASCAR, Petty ultimately spent the majority of 1965 as a drag racer.

He had an automobile accident at the Southeastern Dragway in Dallas, Georgia, which killed a small boy and injured seven other people.

Petty and his group were successful in reaching settlements after facing litigation for more than $1 million. Even after rejoining NASCAR, he kept drag racing and took home his second Daytona 500 victory in 1966.

Richard won 27 out of 48 races in 1967, setting a record by winning ten straight races from August to October and also winning his second Grand National Championship.

Petty won races in the early months of 1980 at Nashville and North Wilkesboro, but a disastrous collision at Pocono in the summer ended his chances of winning the title.

He made a comeback the following year by winning his sixth and last Daytona 500. But after switching to the Pontiac Grand Prix in 1982, he experienced his first winless season since 1978.

Richard finished in the top ten for the last time at Budweiser at the Glen in 1991 and shortly after, he declared he would retire after the 1992 campaign.

Petty joins Cale Yarborough, Jimmie Johnson, and Danica Patrick as one of the all-time greats of NASCAR.

Petty went on to win four more races, earning his seventh and final NASCAR championship by a mere 11 points.

It is difficult to gauge the exact amount that Richard Petty earns each year as his company, Richard Petty Motorsports, is privately held. There are therefore no publicly available records on which to base estimates of his income.

However, STP has sponsored Richard Petty for many years and a recent deal was concluded for $250,000.

With other big-name brands like GlaxoSmithKline, Nicorette, and Liberty Medical on board, Richard has certainly earned millions from his association with them.

Richard sold his shares in RPM in 2019 for around $20 million and his wealth is currently invested in property and other low-risk assets.

Three victories and other top 10 places during the 1983 season marked a more prosperous campaign for Petty.

Here’s a breakdown of Richard Petty’s annual net worth:

Petty qualified for all 29 races in 1992 despite having subpar race performances during his season.

At Atlanta Motor Speedway’s Hooters 500, which concluded the season and drew a record 160,000 fans, he competed in the last race of his career.

Petty married Lynda Owens in 1958, and the two had four children together: Kyle, Sharon, Lisa, and Rebecca.

Cancer claimed Owens’ life in 2014 and Kyle went on to drive in NASCAR, performing incredibly well, just like his dad.

The Richard Petty Motorsports team is run by the family, who reside in Petty’s hometown of Level Cross and Richard also operates a car modification and restoration business called Petty’s Garage.

Petty, a longtime Republican, was the party’s choice for secretary of state of North Carolina in 1996. In the general election, Elaine Marshall, a state senator, defeated him. He joins other NASCAR drivers like Carl Edwards and Jeff Burton who considered a run for public office.

Petty started working as a color commentator for CBS television in 1995 when he retired from racing.

Later, he worked as a spokesperson for a variety of businesses and products, such as Liberty Medical, Cheerios, Nicorette, and Goody’s Headache Powder.

Here are some of the finest moments from Richard Petty’s career:

After retiring, Petty started a summer camp called Victory Junction with the goal of providing chronically ill kids with a joyful and educational outdoor experience.

This was a side of Petty that his fans had not seen before and it made him even more popular, despite no longer competing.

How Does Richard Petty Spend His Money?

In Wyoming, Richard Petty has made his home on his ideal ranch which he bought in 1992. It is a 90-acre area of land with chilly slopes during the winter and lovely green grass throughout the late spring.

The Petty family’s legacy in NASCAR is the focus of the Petty Museum, located on Branson Mill Road in Level Cross, North Carolina, in the family’s old neighborhood.

He drove the most expensive cars in the world but you can see him driving a truck at home, as it’s the most comfortable for where he lives.

Richard has owned some of the most expensive motobikes in the world, and is a regular participant in the Kyle Petty Charity Ride.

In his final season, he qualified on the front row of the Pepsi 400 but had to withdraw due to the terrible heat.

Petty was involved in an accident on the 94th lap of the very dramatic race, and his car caught fire while he was able to finish in 35th place after his pit team got the car functioning once more.

Here are some of the best highlights of Richard Petty’s career:

After being approached by Pixar, Richard was intrigued by the possibilities that animated films offered.

Petty provided the voice of Strip Weathers for the Disney/Pixar animated picture “Cars” in 2006, one of the highest grossing movies that year. The persona was based on Petty’s well-known Road Runner Superbird, Number 43.

Richard Petty always had strong views on various topics and was never shy about expressing them.

After his years behind the wheel, he was able to give a poignant view of what it was like to be a race car driver.

Here are our favorite quotes from Richard Petty:

Richard Petty was a one-of-a-kind driver with a competitive streak that just didn’t know when to quit, similar to Denny Hamlin and Jeff Gordon’s style.

Now that you know all about Richard Petty’s net worth, here are some of the best success lessons to learn from Richard Petty:

1. Know When To Quit

Richard Petty was very aware of the difficulties around knowing when to call it a day on his racing career.

He knows the feeling of not wanting to be seen as a quitter when things are going badly, but also not quitting when you’re ahead. Getting the timing right is a very difficult decision to make and you need to weigh up your options very carefully.

Richard was well aware that many opportunities present themselves over the course of one’s career due to luck.

You can work as hard as you like, but sometimes luck plays a part in your destiny, and you don’t necessarily get what you deserve.

Petty had great respect for his fellow competitors and also for himself, making sure that he behaved accordingly.

He knew that if you fail to respect yourself, then you can not have respect for other people in your life.

Richard Petty is regarded as the greatest stock car racing driver of all time, largely due to his numerous consistent performances and podium placings.

In less than five years of becoming a professional racing driver, he achieved success on a global scale.

The King was inducted into numerous stock car racing halls of fame as a result of his contributions and accomplishments, including the Motorsports Hall of Fame in America and the NASCAR Hall of Fame.

As of January 2023, Richard Petty’s net worth is estimated to be $65 Million.

What do you think about Richard Petty’s net worth? Leave a comment below.