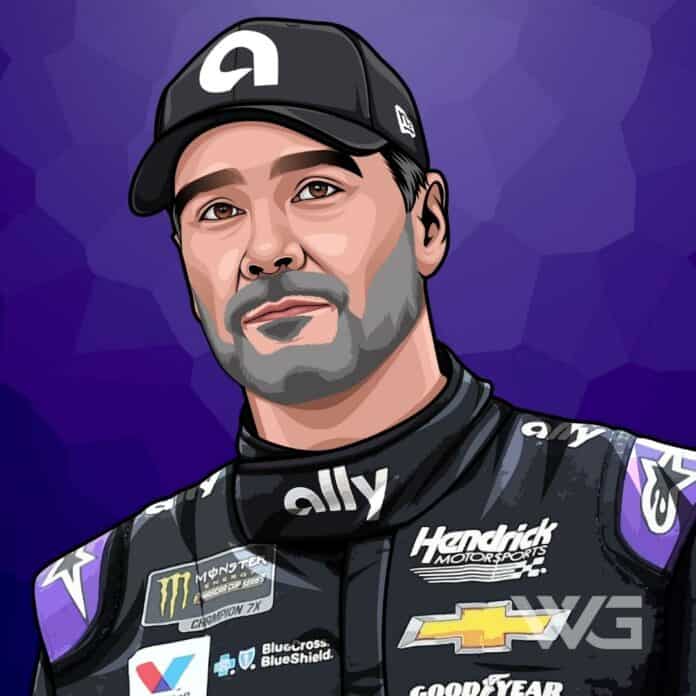 What is Jimmie Johnson’s net worth?

Jimmie Johnson is an American professional race car driver who is widely regarded as one of the best NASCAR racers of all time.

In addition to his race victories, he’s established several new records and milestones that have become the benchmark for upcoming drivers to beat.

As of December 2022, Jimmie Johnson’s net worth is estimated to be $160 Million.

Jimmie was the eldest of three boys and attended Granite Hills high school while racing motorcycles in his spare time.

A successful swimmer, he remains a well-rounded athlete to this day, participating in triathlons and marathons in addition to his racing activities.

After racing in amateur contests throughout his childhood, Jimmie Johnson began his career as a professional racing driver with the American Speed Association in 1997.

He made his NASCAR Busch Series debut at the 1998 Indianapolis Raceway Park event before transitioning to NASCAR Cup Series IN 2002.

Johnson won his first All-Star race the following year, finishing 207 ahead of Dale Earnhardt Jr, who would later become his teammate.

His career and profile improved significantly during the period from 2006 to 2010, with Johnson enjoying a winning streak that included three consecutive NASCAR Cup Series championships.

This made him the second driver to achieve such a feat, following Cale Yarborough, who won consecutive championship titles from 1976 to 1978.

Over the years, Johnson has made many media appearances, including on the Jeremy Clarkson show, Top Gear, in a segment on NASCAR racing.

As he has established himself as one of the best racers of his time, Johnson’s career earnings have continued to increase.

The combination of prize money and lucrative sponsorship deals has risen along with his fame, remaining his since his retirement.

Johnson’s high career earnings will continue as he participates in IndyCar racing and other motor sports.

As one of the richest racing drivers in the world, Jimmie Johnson’s net worth has continued to rise since he first began racing professionally.

His winning streak led to the most notable increase, beginning around 2010 and continuing to his final season full-time in 2020.

Despite this retirement from NASCAR, Johnson continues to race in other motor sports, suggesting his net worth is likely to remain high for some time.

Jimmi Johnson is married to Chandra Janway, with whom he lives in Charlotte, North Carolina, along with their daughters Genevieve and Lydia.

Close friends with his NASCAR competitor Blaise Alexander, Johnson had his initials included along with a flame decal to commemorate his passing.

Johnson has over 500,000 followers on his official Instagram account, where he posts photos from his recent racing events and other news and updates.

In addition to being one of the richest athletes in the world, Jimmie Johnson is also one of his generation’s most celebrated sports car racers.

He’s been nominated for many awards for his contribution to racing and winning dozens of races and trophies.

Here are some noteworthy awards and achievements from Jimmie Johnson’s career:

It’s an impressive list of accomplishments that many professional drivers have failed to match.

How Does Jimmie Johnson Spend His Money?

As you might expect from such a successful race car driver, Jimmie Johnson has access to many of the most expensive cars in the world for his personal garage.

These range from classic muscle cars, a 1967 Chevy Camaro SS, and even a Ford woodie wagon, which he was gifted while growing up in California.

His luxurious home features a library, pool, fountain, and many bedrooms and bathrooms, with the property surrounded by landscaped gardens.

Jimmie Johnson’s incredible career, including seven championships and many career winnings, has featured plenty of highlights worth noting.

He’s raised the bar for performance expectations in motor sports and become a well-loved figure in popular culture.

Here are some of the best highlights of Jimmie Johnson’s career:

These career highlights represent the tip of the proverbial iceberg for Johnson’s iconic career as a driver and sporting personality.

We can expect many more great moments to come as Johnson’s career continues into the future.

With dozens of victories on the track to his credit, Jimmie Johnson has had many opportunities to share his thoughts with the sporting media.

He’s opened up about his approach to creating a mindset for success and how to remain disciplined in the face of stress.

Here are our favorite quotes from Jimmie Johnson:

Now that you know all about Jimmie Johnson’s net worth let’s take a look at the important lessons on life and success his experiences can teach us.

Few sportsmen can compare to his track record of success, making Johnson’s insights as valuable as any other driver active today.

Here are some of the best success lessons to learn from Jimmie Johnson:

While most motorsports fans adore Jimmie Johnson, occasionally, he has to deal with unpleasant critics who aren’t the nicest people to be around.

He deals with negative feedback by judging it on its merits and disregarding those who just want to be mean or vindictive.

Working towards accomplishing goals is an effective way to ensure your mind continues to develop and grow.

Once you feel like you’ve begun to master one particular skill, set yourself new goals and take your experiences outside your comfort zone.

As Johnson’s commitment to athletics demonstrates, you don’t have to be a professional athlete to get the core benefits from exercise and training.

That concludes this article exploring the professional racing career and net worth of Jimmie Johnson, one of the best NASCAR drivers of all time.

He’s earned millions of dollars through prize money and sponsorships, adored by motor sports fans around the world.

With his ongoing racing outside of NASCAR likely to increase his net worth, be sure to check back on this article in the future for the most up-to-date information.

As of December 2022, Jimmie Johnson’s net worth is estimated to be $160 Million.

What do you think about Jimmie Johnson’s net worth? Leave a comment below.