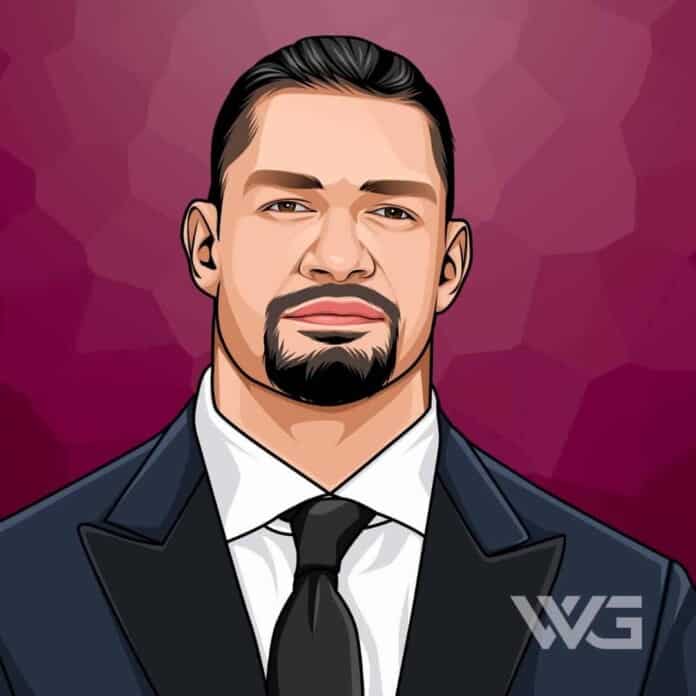 What is Roman Reigns’ net worth?

Despite Roman Reigns’ net worth, life has not been easy, suffering a major setback to his wrestling career when leukemia caused his withdrawal from competitive wrestling.

As a young boy, sports were Roman’s natural element. He gravitated towards football due to his strength, speed, and aggressive, take-no-prisoners attitude.

The Pensacola News Journal named Joe Anoa’i, aka Roman Reigns, as Defensive Player of the Year, his first major award. This was a result of winning various inter-school tournaments.

As a senior player, he recorded 120 tackles together with 12 sacks. Adding to that, the two interceptions and six forced fumbles secured the honors.

It was no surprise when he left for the Georgia Institute of Technology on a scholarship to play football.

However, he acknowledged at the time that if it didn’t work out on the field, he’d fall back on his fighting heritage to become an American professional wrestler.

His NFL stints with both the Minnesota Vikings and Jacksonville Jaguars as a professional gridiron football player were short-lived.

He quickly retired from professional football to pursue wrestling after a final season with the Edmonton Eskimos.

Gridiron’s loss was wrestling’s gain in 2010. The “Big Dog” joined WWE and on 19 August debuted in a 15-man all-out battle. He was then contracted to Florida Championship Wrestling, a WWE developmental territory.

He secured the WWE championship four times, as well as winning the WWE Universal Championship twice.

Roman’s career highlights include a WWE Intercontinental championship and a WWE Tag Team Championship. He also received the 2014 Superstar of the Year award.

Outside of wrestling, Roman Reigns enjoys being an actor, famously performing with fellow wrestler Dwayne “The Rock” Johnston in the movie Fast & Furious Presents: Hobbs & Shaw.

He has also branched out into advertising, being the face of the C4 Energy Drink. This fast-growing brand is set to capitalize on the WWE champion’s rugged good looks and loyal fans.

His successes both inside and outside the ring catapulted him onto the list of richest wrestlers in the world.

Here’s an overview of Roman Reigns’ earnings throughout his career. These figures reflect the reported minimum guaranteed salary that wrestlers signed to the WWE franchise received.

Other earnings include championship bonuses, endorsement deals as well as movie and other entertainment fees.

While it is difficult to pin down exactly what a celebrity is worth, here’s a summary of what’s reported as Roman Reigns’ annual net worth:

Roman met his wife, Galina Joelle Becker, while still at college, and the couple dated for several years.

The two were inseparable and on December 14, 2008, the couple produced a baby girl, Joelle. They married in December 2014 with their daughter attending as her mother’s flower girl.

Roman and his wife welcomed twin boys into the world in 2016. In April 2020, the couple proudly announced yet another set of twin boys.

We’re certainly looking forward to watching them wrestle in the years ahead.

Roman is now the last of his famous Samoan father, Sika’s wrestling line.

Since his high school days, Roman has received recognition for his athletic prowess.

Here are some of his awards and achievements so far:

How Does Roman Reigns Spend His Money?

As befits his status as a wealthy WWE superstar, Roman presides over a garage filled with luxury vehicles.

At one time or another, his Tampa, Florida residence housed a Mercedes Benz SUV and a Range Rover. There’s also a Lamborghini Hurricane, one of the most expensive cars in the world.

Unsurprisingly, he’s said to have some ordinary, down-to-earth cars in his stable, with a Toyota Frontrunner, Chevy Equinox, and a Nissan Rogue leading the charge.

Besides his lavish Tampa home, Roman has purchased various investment real estate properties around the country.

Here are a few of the highlights of Roman Reigns’ career:

Here are some of our favorite Roman Reigns quotes:

If you like these, then check out some more Roman Reigns quotes.

Now that you know all about Roman Reigns’ net worth, here are some lessons we can learn from him:

He feels there’s no substitute for his family, it’s the most important thing in his life. With a loving wife and adoring children, Roman Reigns seemingly has the world at his feet. But his recent health scare and ongoing concerns over the effects of cancer have put his success into perspective.

2. Don’t Listen To The Negative

Roman has had his fair share of negative commentary and fan abuse.

He’s pragmatic when it comes to naysayers, understanding that not everyone sees things as he does. Yet, he refuses to engage in the negative and strives to keep his chin up, even when the winds of public opinion may be against him.

He focuses on his work, knowing that actions speak louder than words when he’s in front of his crowd of fans.

3. Your Work Ethic Is Everything

Roman Reigns is a big man, and he has a prodigious work ethic.

Aside from the daily physical training needed to maintain his body to endure the rigors of the ring, Roman is aware of his duty to engage with his audience every week.

This entails pitching up for the weekly live shows that help sell the business of wrestling. With his education in management, Roman is well aware of the critical role he plays in ensuring that the business thrives.

To this end, he shows up to work with the family attitude and work ethic which is the hallmark of a champion.

Roman Reigns is the current WWE Heavyweight Champion best known for his comeback after a battle with leukemia nearly ended his wrestling career.

After taking on the villain role in “The Shield” tag team, he went on to become the undisputed WWE Universal Championship winner.

Since then, he’s joined the ranks of the world’s richest wrestlers with an annual salary of more than $5 million, excluding his earnings from films and endorsement deals.

What do you think about Roman Reigns’ net worth? Leave a comment below.