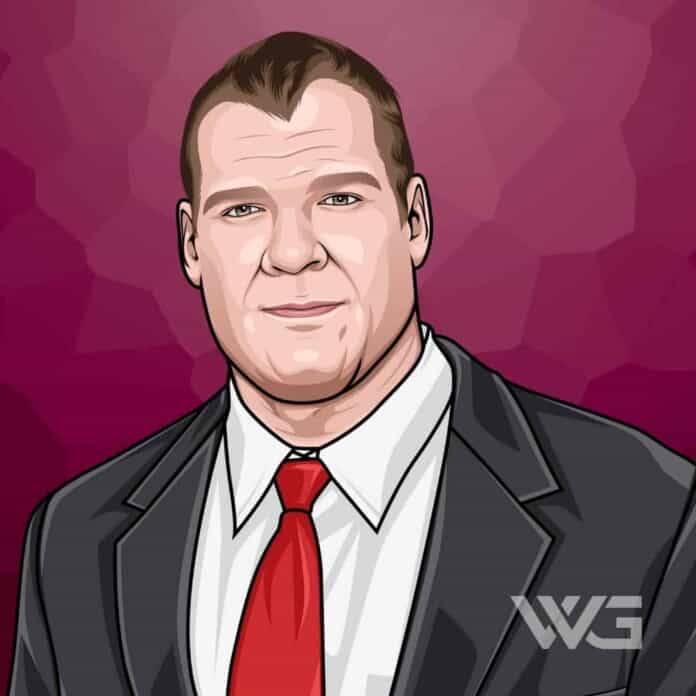 What is Kane’s net worth?

Glenn Thomas Jacobs, better known by his ring name Kane, is a professional wrestler and politician who has been throwing down since his WWF debut in 1995.

Currently serving as the Republican Mayor of Knox County, Tennessee, since 2018, Kane’s entire career has been filled with success, and that trend is unlikely to change anytime soon.

Glenn Thomas Jacobs was born in Torrejón de Ardoz, Spain, in 1967 to a United States Air Force family, and he grew up near St. Louis, Missouri, attending high school in Bowling Green.

In high school, he excelled at basketball and football, and in college, he earned a degree in English literature at Northeast Missouri State University while continuing to play sports.

Jacobs debuted with the World Wrestling Federation in 1995 under the name Mike Unabomb where he defeated Reno Riggins in a dark match.

By 1997, the WWF began steadily building up to the debut of Jacob’s new character Kane, a horror-themed titan with a love of fire who would serve as a younger half-brother to The Undertaker.

The character of Kane officially debuted on October 5th, 1997, at Badd Blood: In Your House, a pay-per-view WWF special event.

After teaming up with Mankind, Kane won the WWF Tag Team Championship twice, but after turning on Mankind, he allied with The Undertaker to compete alongside Stone Cold Steve Austin in a triple threat match for the WWF championship.

In 2007, Kane won a battle royal and gained a match for the ECW Championship against Chavo Guerrero, who he defeated.

After losing the title a year later, Kane moved back to Raw, where he lost a fatal four-way to Dave Bautista and then attacked the commentators.

Kane continued to raise hell in the ring but was eventually injured by Brock Lesnar in a 2015 match after Lesnar smashed his ankle with the ring steps.

After a hiatus, he returned to the ring, even choke-slamming John Cena during an episode of Raw before losing to him in a no disqualification match.

Since 2019 he has made sporadic appearances in the ring but now mainly focuses on his political career.

Kane has made a lot of money both from his wrestling career and his career as a politician.

While he may not make much money from wrestling anymore, we have details on his past and current earnings.

Here is what we know about Kane’s career earnings:

Although he isn’t one of the richest wrestlers in the world, Kane certainly isn’t hurting for cash.

Glenn Thomas Jacobs married Crystal Maurisa Goins in 1995, and the couple has two daughters, Arista and Devan, and two grandchildren.

Outside of his wrestling career, Jacobs is an insurer, owning and operating his own Allstate agency with the help of his wife.

Jacobs stated in an interview that their insurance business promoted them to sell their Jefferson City home and move to Knoxville since the couple had grown tired of the commute.

As Kane, Glenn Jacobs is one of the most decorated wrestlers in history, and he has earned more than his fair share of awards.

While we can’t list everything he’s won and done, we can point out the most noteworthy.

Here are some highlights from Kane’s career:

How Does Kane Spend His Money?

There isn’t much information on what exactly this wealthy wrestler spends his money on, but we know a few things.

The 6,924 sqft home is situated on an isolated hill with a quarter-mile-long driveway and an elevation of 250 ft.

The home’s interior screams luxury with a jacuzzi bath surrounded by windows, a giant luxury kitchen, and a huge downstairs man-cave complete with a 2,400 sqft garage that doubles as a full gym.

While we don’t have many details about his current home, we do know that a good portion of his money goes towards his political efforts, with the former wrestler having spent an estimated $13 per vote on his re-election efforts in 2022.

Kane has had a lot of high points in his wrestling career and political career that make him a unique figure.

While he’s won many awards, he has also benefited from some key moments that have made him stand out.

Here are some of the best highlights of Kane’s career:

Kane certainly has a way with words while he’s in the ring, and he’s filled with great quotes.

If one thing is for certain, he definitely isn’t afraid to call it as he sees it!

Here are our favorite quotes from Kane:

Now that you know all about Kane’s net worth, we can take a quick look at what this titan can teach us about success.

While we may not be striving to take a beating in the ring, there is still a lot he can teach us.

Here are some of the best success lessons to learn from Kane:

1. You Can’t Make Everyone Happy

Many people get caught up worrying too much about pleasing everyone else, and this way of thinking will only make it harder to get ahead.

The sooner you accept that you’re going to have haters, the sooner you can start getting ahead and leaving them in the dust!

2. Take Time To Do What You Want

When you’re working toward your goals, make time to do the things you want.

Nothing is worse than burning out before you achieve success, so forget to have fun and recharge your batteries every now and then to keep yourself motivated.

Everyone wants to succeed and do what they love, but that is much easier said than done.

Some goals will take years or even decades to reach, so you’ll want to plan ahead for what you need in the interim.

Don’t give up on your dreams, but have something to fall back on while climbing that ladder.

Kane is one of the most iconic wrestlers in the industry, and even as a politician, he is still kicking ass.

While it’s yet to be seen if he’ll return to the ring anytime soon, at the rate he’s going, we can guarantee his net worth will keep getting larger.

What do you think about Kane’s net worth? Leave a comment below.