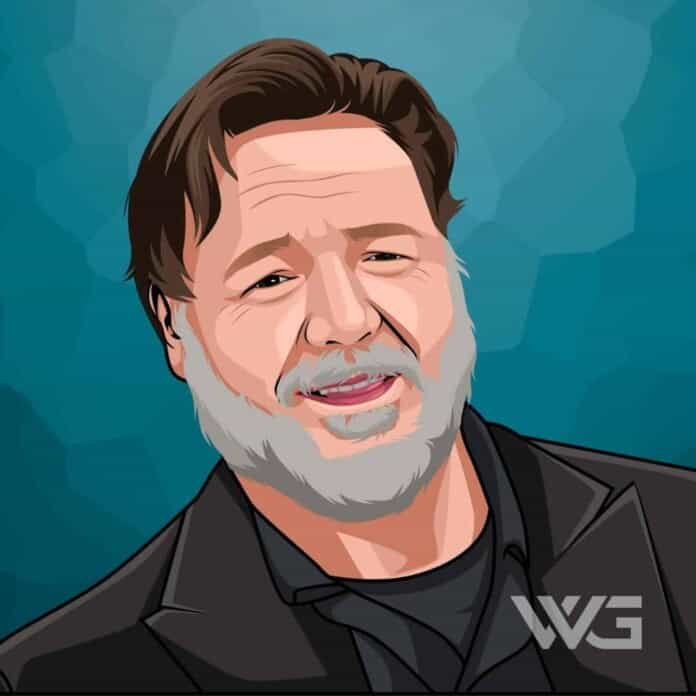 What is Russell Crowe’s net worth?

Although a New Zealand citizen, he has lived most of his life in Australia. He came to international attention for his role in the historical film ‘Gladiator’, for which Crowe won an Academy Award.

Russell Ira Crowe was born on the 7th of April, 1964, in Wellington, New Zealand. He is the son of Jocelyn Yvonne and John Alexander Crowe.

At the age of 4, Crowe moved to Australia with his family. He attended Sydney Boys High School and was involved in acting from a very young age.

In the early 1980s, Crowe aspired to become a musician and made stage performances as ‘Russ Le Roq’. He released many singles like, ‘I Just Want to Be Like Marlon Brando’ and in 1984 performed at ‘The Venue’, Auckland.

Crowe did some television in 1992 and appeared in the second series of ‘Police Rescue’. He also starred in ‘Romper Stomper’, for which he won an Australian Film Institute (AFI) award in the category of ‘Best Actor’.

In 2000 was a great turning point for Crowe as he starred in the British-American epic historical drama ‘Gladiator’, which was directed by Ridley Scott. He received his first Academy Award in the category of ‘Best Actor’ for the movie.

The mid-2000s saw Crowe in a variety of movies such as, ‘Master and Commander’, ‘Cinderella Man’, a drama film based on the life of James J. Braddock, and another Ridley Scott movie, ‘A Good Year’.

In 2007, being Scott’s favorite, Crowe was cast in another one of his projects, ‘American Gangster’. He starred in the movie along with Denzel Washington – the biographical drama crime film won over the critics with its brilliant story and acting.

Here are some of the best highlights of Russell Crowe’s career:

“I want to make movies that pierce people’s hearts and touch them in some way, even if it’s just for the night while they’re in the cinema; in that moment, I want to bring actual tears to their eyes and goosebumps to their skin.” – Russell Crowe

“If you actually read the Bible, you can see there’s a whole lot more information in there than the way we interpret the Bible. Because there are single lines in the Bible where if you just take them at face-value, they don’t make any sense whatsoever in the world we see, we know, and we understand.” – Russell Crowe

“If you grow up … in the suburbs of anywhere, a dream like this seems kind of vaguely ludicrous and completely unattainable, this moment is directly connected to those childhood imaginings. And for anybody who’s on the downside of advantage, and relying purely on courage, it’s possible.” – Russell Crowe

“I like villains because there’s something so attractive about a committed person – they have a plan, an ideology, no matter how twisted. They’re motivated.” – Russell Crowe

“This is possibly the most shameful situation I’ve ever gotten myself in in my life, and I’ve done some pretty dumb things in my life. So to actually make a new No. 1 is spectacularly stupid.” – Russell Crowe

3 Leadership Lessons from Russell Crowe and from Gladiator

Now that you know all about Russell Crowe’s net worth, and how he achieved success; let’s take a look at some of the lessons we can learn from him:

1. Leadership Is Not a Position

The moment we retire from trying to pursue greatness and become successful and focus on being the best we can be is the moment that a wealth of opportunities will open up to us. Success is not something you pursue, but something you attract by the person you become.

If you want to change the culture of an organization, it is going to take incredible and fearless leadership to do it.

Are you fearless as a leader? Are you prepared to confront change, and confront issues that have your leadership or organization at a standstill? The word hero comes from “servo.” It means to serve something greater than yourself.

The first powerful leadership lesson here is to develop your mental and physical strength to Lead.

The second leadership lesson here is about: Honor. To be a leader others will follow, it means developing integrity and becoming a person that others can trust.

Maximus proved to his men that he was a leader that could be trusted. He motivated them, he inspired them, and he strengthened them. They followed him not because they had to but because they wanted to.

How much is Russell Crowe worth?

Russell Crowe’s net worth is estimated to be $120 Million.

How old is Russell Crowe?

How tall is Russell Crowe?

He is mostly based in Australia and America and became famous worldwide with perhaps the most brilliant film of his career, ‘The Gladiator’. He is not just an actor but also a musician of great talent and has been associated with many Australian and Canadian bands.

As of December 2022, Russell Crowe’s net worth is approximately $120 Million.

What do you think about Russell Crowe’s net worth? Leave a comment below.

Anthony Mundine was the highest-paid rugby player in Australia and, as a boxer, became world champion twice, ending his career with a massive fortune.