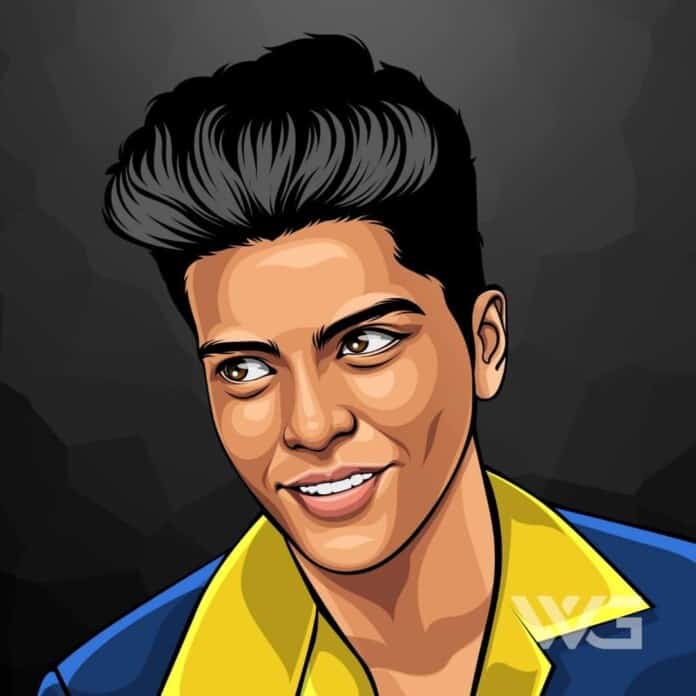 What is Bruno Mars’ net worth?

As of February 2023, Bruno Mars’ net worth is estimated to be $175 Million. He is one of the highest-paid singers in the world with the most selling albums.

Mars initially gained recognition when he released his debut single ‘Just The Way You Are’. Mars has sold over 130 million records worldwide, which makes him one of the best-selling artists of all time.

Peter Gene Hernandez “Bruno Mars” was born in Honolulu, Hawaii on the 8th of October, 1985. Mars grew up in a musical family throughout his childhood. He is the son of Pete and Bernie. Mars got his nickname “Bruno” when he was still a baby.

Mars attended Roosevelt High School where he formed a band with his friends. He pursued his music career at the beginning of 2000’s when he started to collaborate with stars such as Travie McCoy and K’Naan.

Bruno Mars started his early career by adopting the stage name ‘Bruno Mars’. He later signed to Motown Records in 2004 and he got the opportunity to meet the producer and songwriter Philip Lawrence who also was signed to the same label as Bruno.

Philip Lawrence introduced Mars to Atlantic Records in 2006. Mars’ career took off and in addition to his career as a singer, he collaborated with Philip Lawrence and Ari Levine to the record producing and songwriting team.

Mars released his first debut single ‘Just The Way You Are’ from his album ‘Doo-Woops & Hooligans’ and his single peaked at No.1 on the Billboard Hot 100. The album was titled “the year’s finest pop debut’ and catapulted Mars to international stardom.

His second album was released in 2012 entitled ‘Unorthodox Jukebox’ and one of the album’s lead singles ‘Locked Out of Heaven’ topped the Billboard Hot 100 for over six weeks in 20 countries.

Since then, Bruno Mars is a worldwide artist that has collaborated with some of the finest artists in the world including Beyonce and Cardi B.

Here are some of the best highlights of Bruno Mars’ career:

“I can’t even speak Hawaiian, but if you go there and listen to a Hawaiian song, you get captured because it’s so beautiful like the melody is just gorgeous and you know Bob Markley is on the radio every single day.” – Bruno Mars

“I write a lot of songs about being in love, how beautiful women are but I’ve definitely experienced that other side of love where you’re in a situation where you love a girl so much but you just know for a fact that she doesn’t love you the same. “Grenade” is the extreme way of saying “I’d do anything for you and why can’t I feel you would do the same for me?” – Bruno Mars

“You know, when Michael Jackson does the moonwalk, he’s showing off! When Prince or Hendrix do a guitar solo, it’s confidence! I would hate to be at a show and some nervous wreck is sweating up there and doesn’t feel like he deserves to be there.” – Bruno Mars

“I watch the best. I’m a big fan of Elvis. I’m a big fan of 1950s Elvis when he would go on stage and scare people because he was a force and girls would go nuts! You can say the same thing for Prince or The Police. It’s just guys who know that people are here to see a show, so I watch those guys and I love studying them because I’m a fan.” – Bruno Mars

How much is Bruno Mars worth?

Bruno Mars’ net worth is estimated to be $175 Million.

How old is Bruno Mars?

How tall is Bruno Mars?

Bruno Mars is today one of the world’s most popular artists. His songs ’24K Magic’ and ‘Just The Way You Are’ have earned him worldwide attention and he has collaborated alongside many famous stars including Damian Marley and David Guetta.

What do you think about Bruno Mars’ net worth? Leave a comment below.