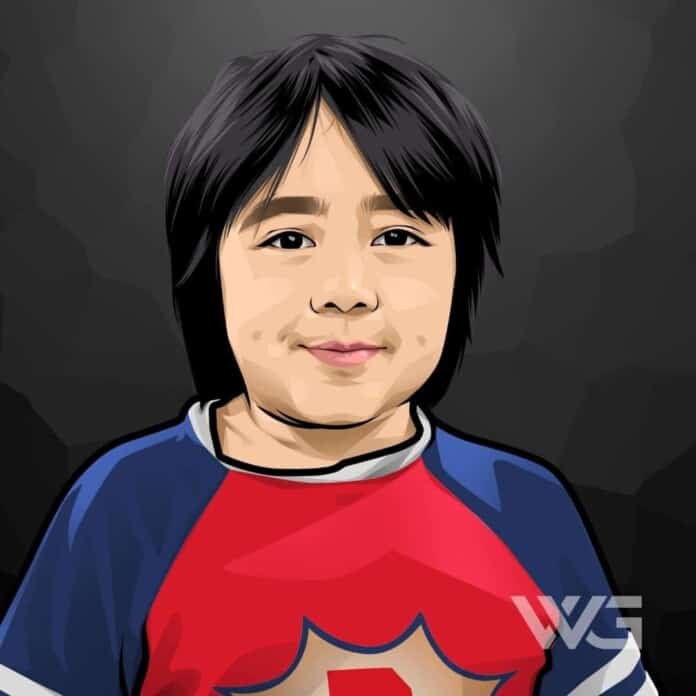 What is Ryan Kaji’s net worth?

Ryan Kaji is a nine-year-old YouTuber.

Kaji runs a YouTube channel Ryan ToysReview with his parents Loann Kaji and Shion Kaji. His channel has over 30 million subscribers on YouTube channel. The Kaji family together is worth millions.

According to Forbes, Kaji earned $11 million between 2016 and 2017 and was the eighth highest-paid YouTuber.

Ryan Kaji was born in Texas. He began making YouTube videos in March 2015 after watching other toy review channels like EvanTubeHD and asking his mother, “How come I’m not on YouTube when all the other kids are?”

Kaji’s mother decided to quit her job as a high school chemistry teacher to work on the YouTube channel full-time. On a regular day, it struck him that he would like to be featured in a YouTube video.

In 2017, Kaji’s parents signed a deal with the pocket watch, which does the marketing and merchandise for Ryan’s YouTube channels. He became the first child YouTuber with a product line due to his large audience.

The Ryan’s World bright-colored slime is sold for $4-5 per inch, $9 per Ryan’s action figure, and French fry-shaped squishy toys for $18. Likewise, his other toys like Shiney Silver, Glitter Gold, and Molten Orange cost $5 per piece.

He reportedly received around $11 million from his ad revenue between 2016 to 2019. Similarly, he earned a jaw-dropping amount of $22 million of revenue from his products and videos in 2018.

The bulk of his wealth comes from video views. In 2019, he set a new record, earning an estimated $26 million from YouTube. That total doesn’t even include the cash he made from other endeavors.

Here are some of the best highlights of Ryan Kaji’s career:

“Ryan’s Mystery Playdate has a big crew working together, and I love to see the teamwork, describing the differences between his two main gigs. Ryan’s World videos are special, too, because I film them at home with my mom and dad, and they’re pretty fun to be around.” – Ryan Kaji

“I remember going to Target with my mom, and she bought a Lego Duplo train set. When we got home, she recorded me on her phone, just so my grandparents could see me.” – Ryan Kaji

“Viewership doubled and tripled each month after that point. More than just in the US, we see that growth globally. At first, I was very confused and surprised to see our homemade-quality videos being watched by so many kids around the world.” – Shion Kaji

“Educational videos, including science experiments and history lessons, are a huge part of the content we produce for the Ryan’s World YouTube channel. We know a lot of kids look up to Ryan, so continuing to provide videos that spark new interest means so much to us.” – Shion Kaji

“Ryan’s Mystery Playdate has a big crew working together, and I love to see the teamwork. Ryan’s World videos are special, too, because I film them at home with my mom and dad, and they’re pretty fun to be around.” – Shion Kaji

Now that you know all about Ryan Kaji’s net worth and how he achieved success; let’s take a look at some of the most vital lessons we can learn from him:

1. Success Has No Age

Ryan Kaji followed his dreams to become a YouTuber, and he is only eight years old and already has an impressive net worth. Success has no age. Just follow your dreams.

2. Don’t Give Up On Your Dreams

Like we mentioned above, dreams are so important to have. Without plants, you can’t achieve a successful life.

There is no doubt that life is short, and no matter what age you are in, have fun.

How much is Ryan Kaji worth?

Ryan Kaji’s net worth is estimated to be $100 Million.

How old is Ryan Kaji?

How tall is Ryan Kaji?

Ryan Kaji is a YouTube personality who is best known for starring on the YouTube channel Ryan’s World, which was formerly known as Ryan ToysReview.

The track was started in 2015 and featured Ryan and his mother, father, and his twin sisters.

Today he is one of the highest-paid YouTube personalities in the world.

What do you think about Ryan Kaji’s net worth? Leave a comment below.

What is Kevin Spacey's net worth? Introduction As of ,...