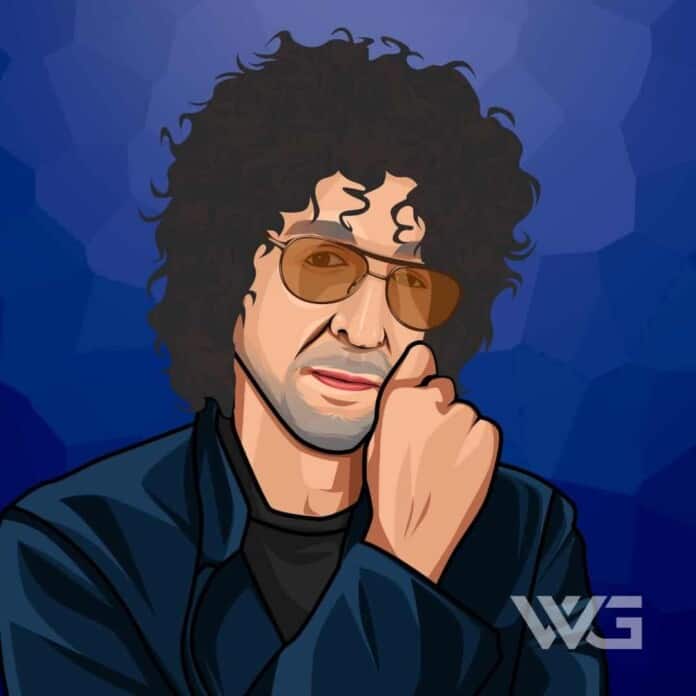 What is Howard Stern’s net worth?

As of February 2023, Howard Stern’s net worth is estimated to be $650 Million. He is an actor, producer, and television personality from Queens, New York. Stern gained his recognition when he accepted a marketing role at Benton & Bowles.

He became widely popular thanks to “The Howard Stern Show,” an American radio program that was nationally syndicated from 1986 to 2005. He signed a five-year $500 million contract with Sirius Satelite Radio and debuted his show on January 9, 2006. On December 9, 2020, it was confirmed that he signed a 5-year extension deal with Sirius that is worth $120 million per year and $600 million in total.

Stern is known for being one of the most successful and highest-paid radio personalities of all time.

• He earned hundreds of millions from his previous contracts

• He earns around $90 million per year after production costs

• Nets around $333k per show after taxes and other costs

• His NYC apartment has 5 units and features 8,000 square feet

Howard Allan Stern was born in the Jackson Heights area of Queens in New York City on January 12, 1954. Stern is the second child of Ray and Ben Schiffman. His parents are Jewish, and their families are from Hungary and Poland. His mother was an office clerk in New York City. His father served in the army during World War II and later worked as a radio engineer at WHOM in Manhattan. He was also a co-owner of a recording studio in Manhattan, Aura Recording Inc., where commercials and cartoons were created. Howard also has an older sister, Ellen.

When Howard was 1 year old, the family moved to Roosevelt, where he attended Washington Rose Elementary School. When Stern was 15, he moved to Rockville Center, New York, with his family. He enrolled at South Side High School in 1969 and graduated in 1972.

Howard Stern started his career as a radio host in 1979 when he worked for Radio & Records as a morning host at WWWW, a commercial FM radio station. His efforts paid off for him with initial industry recognition, winning a Billboard Award for Personality of the Year.

Stern moved to a radio station in WWDC Washington, where he started to plan a new show. WWDC offered Stern to sign a one-year contract but later decided to sign with WNBC in 1982.

In Washington DC, Stern made significant career inroads after he met a nurse from the U.S Air force and a newswoman who later became a part of the Stern radio.

In 1985 Stern signed on with the New York-based K-Rock, which took his radio career to pioneering heights. A year after his arrival, he broke into the big markets by starting his own show, “The Howard Stern Show.”

Stern’s show was a breakthrough in his career, and he later released his autobiography Private Parts, which got more than 500,000 copies in print in its first month.

After his autobiography, he starred in films Private Parts and Ryder, P.I. He has released plenty of albums, and in 2011 he replaced Piers Morgan as a judge on America’s Got Talent.

Since then, Stern has gained incredible net worth and has collaborated with celebrities, including the likes of Simon Cowell, Paul Giamatti, Michael Cera, and much more.

Stern was named by Forbes as the world’s highest-paid media personality and the fifth highest-earning worldwide.

Stern signed a $1 million deal with Simon & Schuster in 1993 to write his memoir “Private Parts.” The book was released in October 1993 and became an immediate hit. The first print run of 225,000 copies sold out within hours of going on sale. The book became the fastest-selling book in the history of Simon & Schuster. It stayed on top of the “New York Times” bestseller list for 20 weeks.

The feature film adaptation of “Private Parts” hit theatres in 1997. Stern appeared in the film along with several of his radio show staff, including Robin Quivers, Fed Norris, Gary Dell’Abate, and Jackie Martling. The film was ranked as the number one hit at the US box office on its opening weekend. It grossed a domestic total of $41.2 million at the end of its theatrical run.

Here are some of the best highlights of Howard Stern’s career:

Howard Stern married Alison Berns on June 4, 1978, in Brookline, Massachusetts, when they were both 24 years old. He met her through a mutual friend while he was a student at Boston University. They have 3 daughters: Emily Beth (born in 1983), Debra Jennifer (born in 1986), and Ashley Jade (born in 1993). The couple separated in October 1999 and divorced in 2001.

Stern dated model Angie Everhart and actress Robin Givens in the period between his separation from Berns and meeting model and television host Beth Ostrosky. Stern started dating Ostrosky in 2000. They got engaged on February 14, 2007, and married in October of the following year at Le Cirque restaurant in New York City.

Stern and Ostrosky support the North Shore Animal League of America. The couple has fostered nearly 900 cats together. They have four cats of their own. They are called Bella, Yoda, Walter, and Pebble.

Howard suffers from obsessive-compulsive disorder. He talked about his battle with the condition in his 1995 book “Miss America.” He uses Transcendental Mediation which was also used by his parents since the early 1970s.

In 2008, he bought another two apartments on the 53rd floor, located just below his aforementioned penthouse. He paid $15.1 million for both units.

“I’m sickened by all religions. Religion has divided people. I don’t think there’s any difference between the pope wearing a large hat and parading around with a smoking purse and an African painting his face white and praying to a rock.” -Howard Stern

“And rather than hide that, I would rather put that out on the radio and let someone see the full range of emotions. If you’re going to be strong on the radio, you got to let it all out, even the ugly stuff. And you can’t apologize for it.” -Howard Stern

“I’ve actually apologized to some people I was a real jerk too because I feel ashamed. I didn’t need to be that hungry. There was something going on inside me when I was angry and feeling very threatened and not feeling good about myself.” -Howard Stern

“Okay, well, I guess I’m still a kid. Because when I get really angry and fired up and I feel like my back is up against the wall, I will say vicious things.” -Howard Stern

“I’ve never come into anything successful before. I’ve always been hired by horrible radio stations with horrendous reputations and nothing to lose.” -Howard Stern

How much is Howard Stern worth?

Howard Stern’s net worth is estimated to be $650 Million.

How old is Howard Stern?

How tall is Howard Stern?

Howard Stern is one of the most successful radio hosts of all time. There is no wonder why his net worth is incredibly high. Stern has got several awards and nominations for his work.

We don’t only know him from radio, as he’s also had big success throughout his career as a producer and a television personality. He is the world’s highest-paid media personality, earning the fifth highest worldwide.

As of February 2023, Howard Stern’s net worth is estimated to be an incredible $650 Million.

What do you think about Howard Stern’s net worth? Leave a comment below.