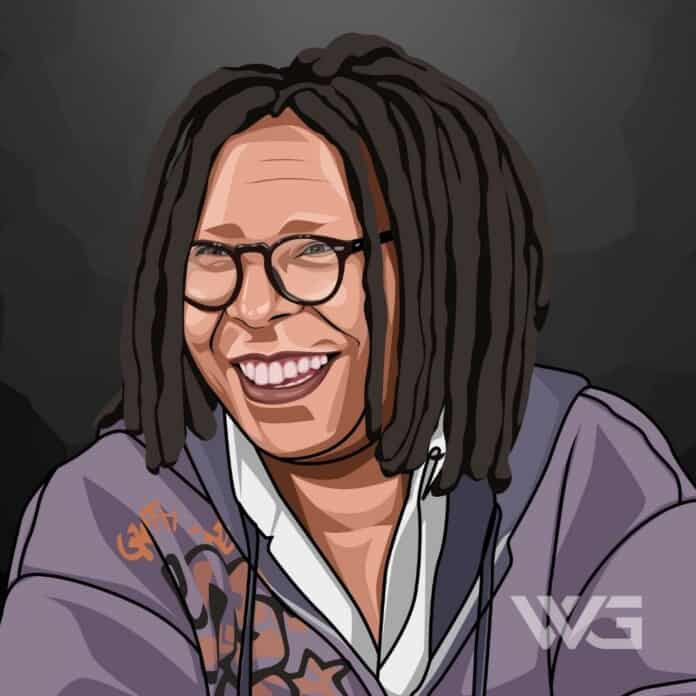 What is Whoopi Goldberg’s net worth?

As of February 2023, Whoopi Goldberg’s net worth is roughly $60 Million.

Whoopi Goldberg is an American actress, comedian, author, and television personality from Manhattan.

She has been nominated for 13 Emmy Awards and is one of the few entertainers to have won an Emmy Award, a Grammy Award, an Academy Award, and a Tony Award.

Caryn Elaine Johnson was born on the 13th of November, 1955, in Manhattan. She is the daughter to Emma and Robert James Johnson. Her mother was a nurse and a teacher while her father served as a clergyman.

She studied until her teen years and later dropped out of school. Her tryst with acting started young. It was during the stage performance that people complimented her by saying that she looked like a whoopee cushion.

In 1974, she moved to California and thereafter lived in various cities such as Los Angeles, San Diego, and San Francisco. It was during this time that she honed her acting skills and developed her talent as a stand-up comedienne.

Soon, thereafter, she returned to New York and started receiving training under acting coach Uta Hagen. Her first-ever appearance on screen was for William Farley’s feature, ‘Citizen: I’m Not Losing My Mind, I’m Giving It Away’.

She started the 1990 decade by starring in the sit-com ‘Bagdad Cafe’. Later, she followed this up with ‘The Long Walk Home’ and ‘Ghost’.

From 1998 to 2001, she appeared in several supporting roles in ‘How Stella Got Her Groove Back’, ‘Girl’, ‘Interrupted’, ‘Kingdom Come’ and ‘Rat Race’. Additionally, she appeared in television and film ventures such as ‘The Magic Schoolbus’, ‘Cinderella’, ‘A Knight in Camelot’ and ‘Call Me Claus’.

Her career zoomed up again in 2007 when she served as the moderator and co-host of daytime talk show ‘The View’. Though the show did not have as big a start as during the time of Rosie O’Donnell, it soon picked up and moved past the latter.

Here are some of the best highlights of Whoopi Goldberg’s career:

“We’re born with success. It is only others who point out our failures, and what they attribute to us as failure.” – Whoopi Goldberg

“When I was a kid they didn’t call it dyslexia. They called it you know, you were slow, or you were retarded, or whatever. What you can never change is the effect that the words ‘dumb’ and ‘stupid’ have on young people. I knew I wasn’t stupid, and I knew I wasn’t dumb. My mother told me that. If you read to me, I could tell you everything that you read. They didn’t know what it was. They knew I wasn’t lazy, but what was it?” – Whoopi Goldberg

“I’d like somebody to get rid of the death tax. That’s what I want. I don’t want to get taxed just because I died. I just don’t think it’s right. If I give something to my kid, I already paid the tax. Why should I have to pay it again because I died?” – Whoopi Goldberg

“I am the American Dream. I am the epitome of what the American Dream basically said. It said you could come from anywhere and be anything you want in this country. That’s exactly what I’ve done.” – Whoopi Goldberg

“There are roles I am never considered for. Meryl Streep roles, let’s say. Why not? I really wanted to do ‘Ironweed,’ for example, because the depression era in this country was one of the best for multiracial people because everybody was poor. Everybody lived in the tents, and under buildings, and under gratings, together.” – Whoopi Goldberg

3 Lessons from Whoopi Goldberg About Happiness

Now that you know all about Whoopi Goldberg’s net worth, and how she achieved success; let’s take a look at some of the best lessons we can learn from her:

Let’s look at this logically. In order for you to have a happy life, you would need to have enough experiences or moments in your life that made you happy.

Going back to increasing your happiness, it’s simple: Take 5 minutes a day and do something that makes you happy. That way, when you think back on your day, you’ll have at least one happy moment to easily focus on.

Don’t make being happy harder than it really is. Keep it simple. Focus more on the good things in your life and start setting aside some time each day to do something that makes you happy.

How much is Whoopi Goldberg worth?

Whoopi Goldberg’s net worth is estimated to be $60 Million.

How old is Whoopi Goldberg?

How tall is Whoopi Goldberg?

Not many black actresses can claim to have a flamboyant and successful career as Whoopi Goldberg. A star in her own right, she is one of the 14 entertainers ever to have an Emmy, Grammy, Oscar, and Tony.

She created history by becoming the first African-American woman to win the Academy Award for best supporting actress in nearly 50 years.

As of February 2023, Whoopi Goldberg’s net worth is approximately $60 Million.

What do you think about Whoopi Goldberg’s net worth? Leave a comment below.