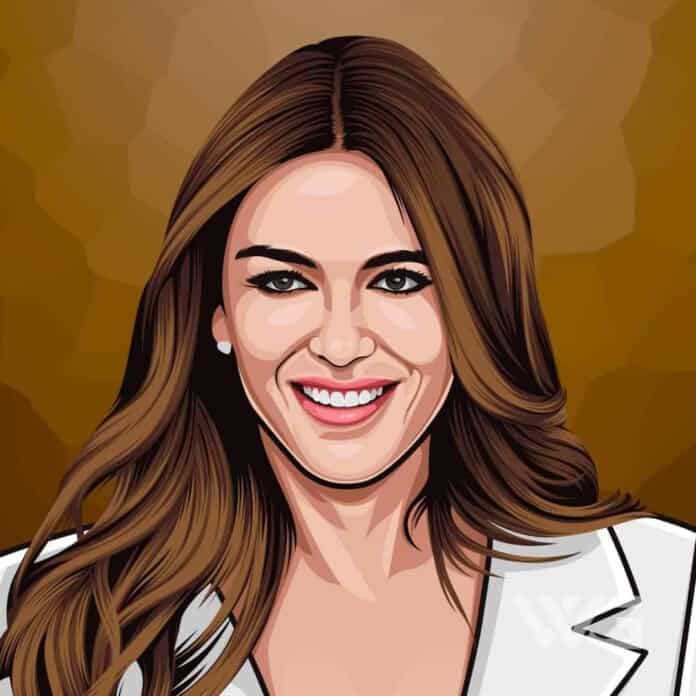 What is Elizabeth Hurley’s net worth?

Elizabeth Hurley is an English businesswoman, actress, and model. Hurley became known in the 1990s for being the girlfriend of Hugh Grant.

As Grant became the focus of international media attention, she accompanied him to the film’s London premiere in a black Versace dress which gained her instant media attention. Hurley had her first model job at the age of 29.

Elizabeth Jane Hurley was born on the 10th of June, 1965, in Basingstoke, Hampshire, England. Hurley is the daughter of Angela and Roy Hurley. Her father passed away in 1996 and served as a major in the Royal Army Educational Corps.

She appeared in the company’s fragrances such as ‘Beautiful,’ ‘Pleasures,’ and ‘Sensuous’ as well as their cosmetics. Hurley was the face of the company until 2001. She has also modeled for Jordache, Lancel, MQ Clothiers of Sweden, and several other companies.

Hurley made her acting debut in the movie ‘Aria’ in 1987. The following year, she starred in the movie ‘Rowing with the Wind,’ guest-starred on ‘Inspector Morse and ‘Rumpole of the Bailey.’ She appeared in 11 films during the 1990s.

Her most popular role was in ‘Austin Powers: International Man of Mystery,’ and she briefly reprised her role in the 1999 sequel, ‘Austin Powers: The Spy Who Shagged Me.’

Hurley appeared in several documentary projects such as ‘The Human Face,’ ‘Valentino: The Last Emperor,’ and ‘Made in Romania.’ She portrayed Diana Payne on 14 episodes of the series ‘Gossip Girl ‘ from 2011 to 2012.

How Does Elizabeth Hurley Spend Her Money?

Elizabeth Hurley owns a massive home that comes with its own lake. She also owns many lavish cars in her garage and a massive collection of jewelry.

Hurley lives in a Herefordshire home, and it comes with 13 bedrooms, five bathrooms, and its very own lake. She continues to live in a lavish home after her split with Shane Warne. It also comes with a complete large cellar, four cottages, 12 stables, a tennis court, and a coach house.

Hurley owns plenty of lavish jewelry. In her collection, we can see diamond earrings, sterling dangle earrings, and gemstone earrings.

Here are some of the best highlights of Elizabeth Hurley’s career:

“Breast cancer is being detected at an earlier, more treatable stage these days, largely because women are taking more preventive measures, like self-exams and regular mammograms. And treatment is getting better too.” – Elizabeth Hurley

“Hugh Grant and I both laugh and cringe at the same things, worship the same books, eat the same food, hate central heating, and sleep with the window open. I thought these things were vital, but being two peas in a pod ended up not being enough.” – Elizabeth Hurley

“I would seriously question whether anybody is really foolish enough to really say what they mean. Sometimes I think that civilization as we know it would kind of break down if we all were completely honest.” – Elizabeth Hurley

“What I really, really want to do is pre-packaged meals. Fabulous versions that are delicious, healthy, not too expensive, and very low in fat. So, that’s my big dream, because there’s a massive hole in the market for that.” – Elizabeth Hurley

“I always found when I was reading an interview with an actor that I wasn’t interested in their political opinions – I just wanted to know what they’d had for breakfast.” – Elizabeth Hurley

“I’m single, and it’s quarantine, too. You just have to let it go and enjoy everything. This is the first summer. Literally, I’ve stopped everything and just stopped to smell the roses in my garden.” – Elizabeth Hurley

Now that you know all about Elizabeth Hurley’s net worth and how she achieved success; let’s take a look at some of the lessons we can learn from her:

You know you want to be a success. You want people to know who you are.

Getting as much sleep as possible and following a healthy diet will stop you from feeling run-down. Stick to a well-balanced diet and workout regime such as yoga.

How much is Elizabeth Hurley worth?

Elizabeth Hurley’s net worth is estimated to be $50 Million.

How old is Elizabeth Hurley?

How tall is Elizabeth Hurley?

Elizabeth Hurley is an English actress, model, and businesswoman. Hurley rose to fame in the movie ‘Austin Powers: International Man of Mystery.’

She also gained a lot of attention when she attended the premiere of ‘Four Wedding and a Funeral’ with boyfriend Hugh Grant. As an actress, she has appeared in more than 40 movies and television projects, including ‘Passenger 57’, ‘Bedazzled,’ ‘Serving Sara’, and ‘Gossip Girl.’

What do you think about Elizabeth Hurley’s net worth? Leave a comment below.