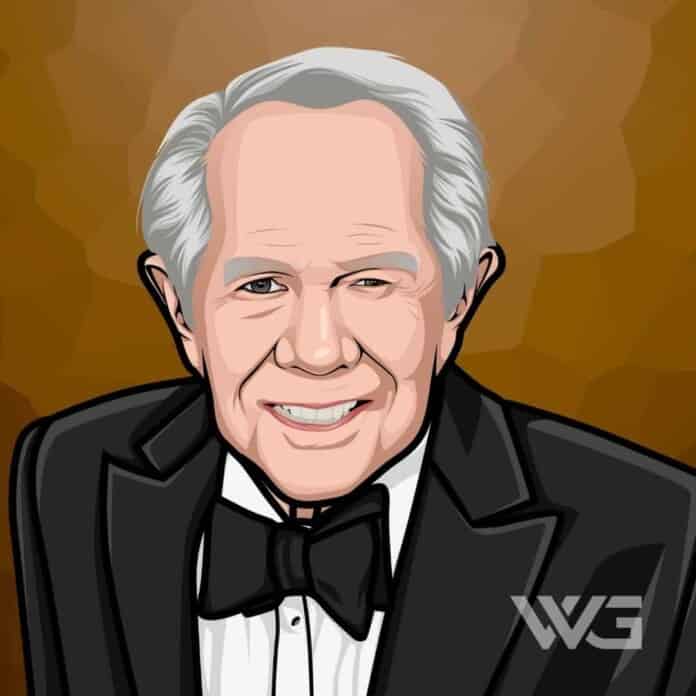 What is Pat Robertson’s net worth?

Pat Robertson is an American media mogul and televangelist. Robertson is a former Republican presidential candidate and a former Southern Baptist minister.

Today, he serves as chancellor and CEO of Regent University and chairman of the Christian Broadcasting Network. He regularly appears on ‘The 700 Club’, which is a flagship television program. Robertson has made numerous predictions of the United States based upon “what God has told him”.

He is the best-selling author and host of ‘The 700 Club’.

Marion Gordon Robertson was born on the 22nd of March, 1930, in Virginia.

His father was a conservative Democratic Senator, and his mother was a housewife and a musician.

He was nicknamed Pat by his brother Willis Robertson Jr. When he was 11 years old, he enrolled at McDonogh School outside Maryland. Between the years 1940 to 1946, he attended The McCallie School in Tennessee.

He then went on the join the Sigma Alpha Epsilon fraternity.

Robertson was born into a political family, and after he graduated from Washington and Lee University, he served two years in the Marine Corps. He went on to study at New York Theological Seminary, where he graduated in 1959. In 1961, he became an ordained Southern Baptist minister.

He started the country’s first Christian television station ‘The 700 Club’ in 1960. In 1978, he went on to found CBN University in Virginia Beach. In the 1980s, Robertson became involved in politics, and he resigned as minister to run for the Republican presidential nomination in 1988.

He founded the Christian Coalition, which was an influential conservative political organization, in 1989. He stepped down as CEO of CBN in 2007 and was replaced by his son Gordon Robertson.

Throughout his career, Robertson often attracted controversy. Robertson and Jerry Falwell were criticized for their statement about the terrorist attacks in 2001. They apparently agreed that the tragedy had been caused by feminists, homosexuals, and abortionists’ immoral practices.

In 2010, he was criticized for his claim that Haiti’s earthquake was divine retribution for a pact with the devil made in the late 18th century.

How Does Pat Robertson Spend His Money?

Pat Robertson has worked hard to get where he is today. There is not much information on how he likes to spend his fortune gained throughout his career.

Like many other stars, Robertson has a big passion for driving fast in nice cars. One car that he has been seen going in is a Corvette.

Here are some of the best highlights of Pat Robertson’s career:

“The Supreme Court has insulted you over and over again, Lord. They’ve taken your Bible away from the schools. They’ve forbidden little children to pray. The knowledge of God as best they can, and organizations have come into court to take the knowledge of God out of the public square of America.” – Pat Robertson

“There’s an assault on human sexuality, as Judge Scalia said, they’ve taken sides in the culture war and on top of that if we have a democracy, the democratic processes should be that we can elect representatives who will share our point of view and vote those things into law.” – Pat Robertson

“So if you’re out there talking about people’s sins, and you’re talking about righteousness, you will get pushback. Jesus Himself did. The apostles did. I mean, there’s persecution all up and down the line.” – Pat Robertson

“Interestingly, termites don’t build things, and the great builders of our nation almost to a man have been Christians because Christians have the desire to build something. He is motivated by the love of man and God, so he builds. The people who have come into (our) institutions (today) are primarily termites.” – Pat Robertson

Now that you know all about Pat Robertson’s net worth, and how he achieved success; let’s take a look at some of the lessons we can learn from him:

Be your own best friend, love yourself, and believe that you can do something great in life.

Be truthful to yourself and the people around you. The truth is something that some people have a hard time providing.

There are times in history where a particular doctrine becomes a symbol of a more significant problem.

How much is Pat Robertson worth?

Pat Robertson’s net worth is estimated to be $100 Million.

How old is Pat Robertson?

How tall is Pat Robertson?

Today, he serves as chancellor and CEO of Regent University and chairman of the Christian Broadcasting Network. He has had a career spanning over five decades, and he is the founder of several prominent organizations and corporations.

Some of these organizations include The Christian Broadcasting Network, the International Family Entertainment Inc., Regent University, the American Center for Law & Justice, and the Founders Inn and Conference Center.

What do you think about Pat Robertson’s net worth? Leave a comment below.