People tend to think that habits are unbreakable. They feel it’s exceedingly difficult to change habits for the better. After all, that’s why so many people struggle to lose weight, quit smoking, or beat procrastination.

But, what if I told you that was wrong?

Habits can be changed. Not only that but changing a habit is easier than you think. What it does involve is thinking about them differently.

It’s precisely how to change habits that Charles Duhigg covers in his book, The Power of Habit: Why We Do What We Do in Life and Business.

He uses a combination of research backed science and his experiences of habit change to take the reader through how to make changes in their lives.

In this post, you’re going to learn the four steps Duhigg has found that helps to get rid of good habits and create new ones.

How Habits Are Formed

We develop habits over time by creating a loop that we repeat over and over again. It’s that loop that cements habits in our minds.

There’s a three-step process that goes into every habit you form:

A habit is formed when a cue signals a routine that provides the brain with a reward.
When that feedback loop is created, your brain shuts off when it comes to making decisions about that loop.

This is why it’s so common for a smoker to automatically have a cigarette after their morning coffee. They’ve done that action so many times it’s cemented itself as a loop in their brain. More often than not, they light up without even thinking.

It’s also why these seemingly routine tasks are so difficult to break. When smokers are trying to quit will talk about how the hardest time to avoid smoking is during that morning coffee. It’s because when that cigarette is removed the loop is broken, and the reward is gone.

Understanding that loop is the key to success with any habit is replacing a “bad” habit with a “good” one. You do that by replacing the reward portion of the loop.

Here’s an image infographic from Duhigg’s book blog that you can use as an example of the habit loop:

How to Change A Habit (Infographic) 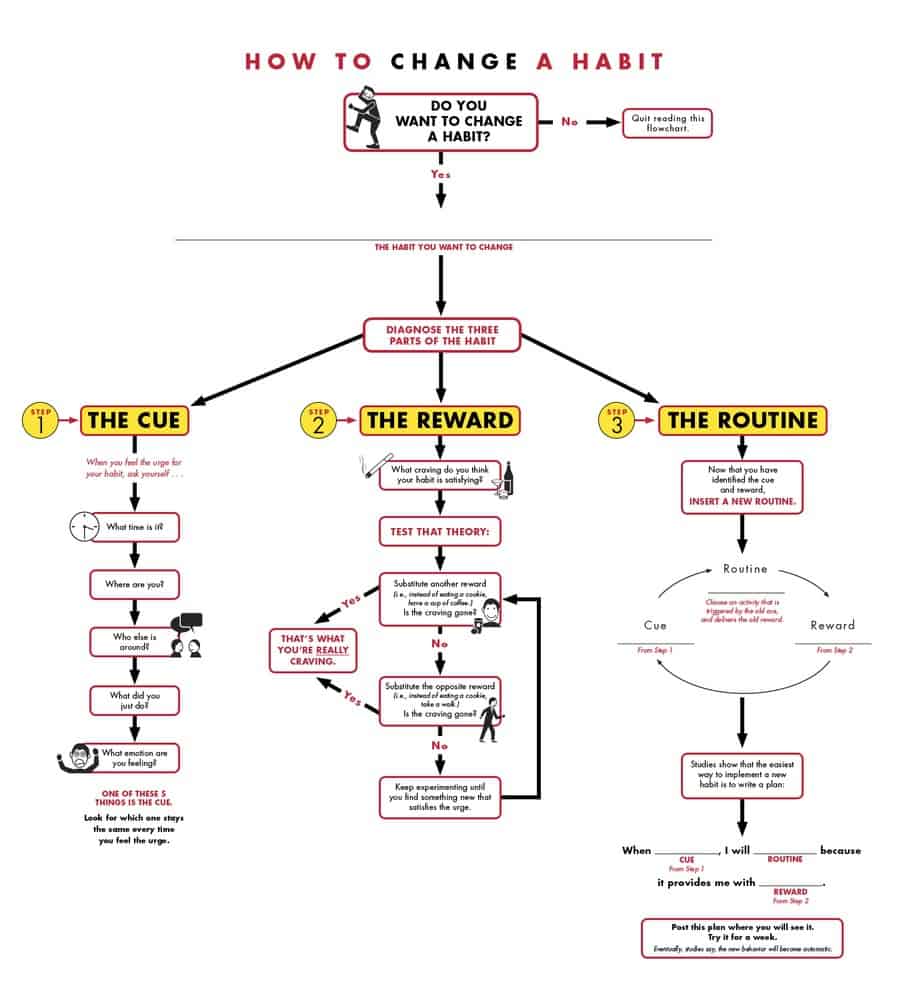 (We’ll cover each of these steps a little bit more in depth later on, so keep reading!)

In this image, the secret to success is finding a “good” reward that replaces the craving.

In this case, maybe the coffee is the reward, not the cigarette. So it could be possible that by keeping the coffee and removing the cigarette the reward is still there, thus making it a lot easier to stop smoking with that morning coffee.

One way you can look at this is through creating Keystone Habits. These are like good habit dominos when you have one good keystone habit; others begin to fall in line.

Losing weight is a common place where creating a keystone habit can make a massive difference with success. We all know it can be difficult to lose weight, many people struggle with it.

What Duhigg found, however, was that researchers began to see one keystone habit that helped people to lose weight over and over again. It wasn’t exercise or drinking more water; it was keeping a food journal.

Seems simple, right? But in reality, this practice is a fantastic example of a keystone in action.

The food journal let dieters keep track of exactly what they ate. Because of this, they were able to identify foods that were bad, see if they fell into common traps, and make small dietary changes.

All of these ‘small wins’ can dramatically add up to significant weight loss over time and reinforce a positive habit loop.

Alright, so now you’re probably wondering how you can start accomplishing some of those New Year’s Resolutions and finally create good habits that stick.

How to Change a Habit (in Four Easy Steps)

Through all of his research and personal experiences in the book, Duhigg found there is a four step framework to replace a “bad” habit with a “good one.”

We’re going to look at each of the steps in the framework below.

We know every habit has three main parts: the cue, routine, and reward. Here, the first step is to think about the habit you want to change.

Once you’ve identified a specific habit, the next thing you need to do is walk through the routine associated with that habit. So you want to think about the “the reward driving your behavior, the cue triggering it, and the routine itself.”

If you’re a smoker, think about what you do every time you light up. If you have a killer sweet tooth, try to note what is happening when you go for that cookie after dinner. And, If you consistently give up when trying, new things look at the routine around how you’re setting yourself up for success.

Duhigg found he was gaining weight because every day he went to the cafeteria at the New York Times (where he’s a writer), would buy a cookie, and eat it while chatting with friends.

This habit was the routine. It’s going to be the action you take around something.
Remember, when habit loops form, the brain just goes through the motions. What you need to do is start training your brain to think again. To change that routine, you need to get your brain kickstarted again and involved in the feedback loop.

Related:  7 Ways to Transform From A Dreamer Into An Achiever

When it comes to bad habits, the reason why you stick with them is that of the reward. If your body and brain get something out of a habit, then the brain is going to keep doing it.

More often than not, it’s this reward that is the entire reason why you’re stuck in a bad habit loop. The reward is what is the response to the craving; the reward satisfies it.

What you need to do is see if you can find a new reward that will still give your craving the same satisfaction but removes the negative action.

Here’s where you are going to have to do a little bit of scientific (well not so scientific) testing. Try experimenting with different rewards.

So, the next time you’re craving a smoke with your morning coffee, try a few other routines and see if anything works. Here are a few ideas:

Do that for a few days or a few weeks until you can start seeing some patterns. And right after you try each new routine, Duhigg advises you do two important things.

This makes it easier to track to see what’s working and what isn’t. If your new routine is making you miserable, note that. If you feel great 15 minutes after looking at a picture of your puppy, then you’ve begun the process of creating a replacement loop.

Every habit has a trigger and finding this is the key to changing your habits. Unfortunately, this is typically the hardest part.

According to Duhigg, researchers have found that our brains are just constantly bombarded with too much information, too many inputs to quickly determine what the primary cue is.

Fortunately, there are ways to find the signal in all that noise. Duhigg talks about five major cues that almost every habit falls into:

Here’s an example straight from the book that will help you understand. Duhigg found he had gotten into the bad habit of eating cookies every afternoon. He’d go to the cafe, buy a cookie (or two) and chat with coworkers.

He wanted to stop this habit and save his waistline, but it was hard to determine exactly what the cue was.

So, if you’re trying to figure out the cue for the ‘going to the cafeteria and buying a chocolate chip cookie’ habit, you write down five things the moment the urge hits (these are my actual notes from when I was trying to diagnose my habit):

He wrote down what happened when he felt the urge for the cookie for a week and found one interesting tidbit.

Every time he wanted a cookie it was around 3:30 pm. This hour long period was the cue. To change this habit, he had to do something else to get a new reward.
This is where having a plan comes in.

Once Duhigg was able to identify the cue, he needed to come up with a plan to change it. Having a plan is the critical point here. After you’ve done the hard work of realizing what the cue is in the habit you want to change, you need to attack it with a specific plan.

Remember, because your habit is set in motion, it means your brain does it automatically. The point of the plan is to help re-wire this habit.

So, back to the example above.

After tracking his behavior and asking the questions he saw that the real ‘reward’ he got from going to the cafe wasn’t the cookie, it was able to chat with co-workers for a few minutes. He wanted to socialize.

Here is the plan he came up with:

It didn’t go perfectly at first. The brain is tricky that way. Realize that forming a new habit loop is hard and prepare for the fact that you will fall off the wagon. That’s where the plan can help.

After a few weeks, Duhigg didn’t need an alarm or note to get himself up and chatting with a friend at 3:30 pm, he did it automatically. He was able to dramatically reduce his cookie buying, lost weight, made new friends, and felt much better.

His brain had re-wired a new habit.

As you go through the process of trying to change your habits, remember what Duhigg calls The Golden Rule of Habit Change:

“You can’t extinguish a bad habit, you can only change it.”

Anything you want to change, you can. Just put the above steps into practice. It won’t always be easy, but once you start locking down those small wins, then they sky is the limit.

6 Everyday Tips on How to Stay Happy No Matter What 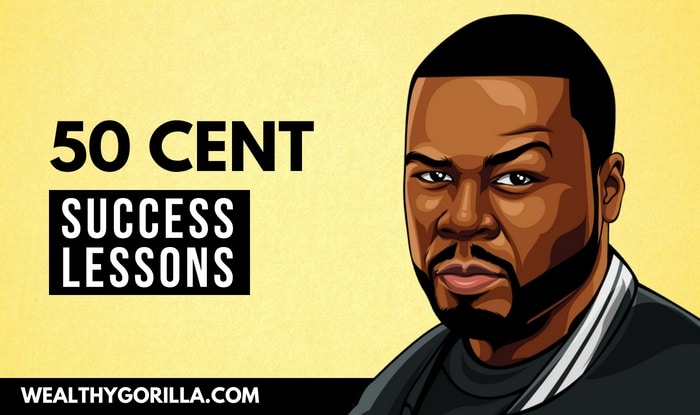