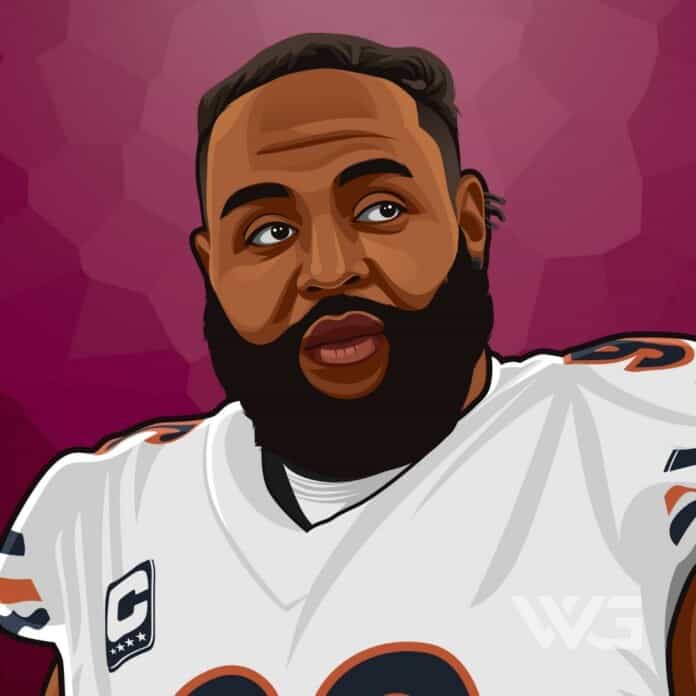 What is Akiem Hicks’ net worth?

Akiem Hicks is an American football defensive end for the Chicago Bears of the NFL.

Hicks was drafted by the New Orleans Saints in the third round of the 2012 NFL Draft and has also played for the New England Patriots. He played college football at Sacramento City College and at the University of Regina.

Akiem Jamar Hicks was born on the 16th of November, 1989, in California.

After the 2008 season, he was rated as a top junior college player and signed to play at LSU. However, recruiting violations by LSU made him ineligible for the 2009 season; unable to transfer to another American football program.

The Saints drafted Hicks in the third round of the 2012 NFL Draft; it was the Saints’ first pick of the draft. He became the ninth Canadian Interuniversity Sport player to be selected in the NFL draft, and the second-highest NFL draft pick in CIS history.

The following year, Hicks started all 16 games making 43 tackles and 4.5 sacks. In 2014, he played 15 games with 42 tackles, two sacks, and two passes defended. To begin the 2015 season with the Saints, Hicks played three games with three tackles.

On September 30, 2015, Hicks was traded to the New England Patriots for tight end Michael Hoomanawanui. On December 20, 2015.

In 2016, Hicks signed a two-year contract with the Chicago Bears. On September 11, 2016, Hicks made his debut as a Chicago Bear against the Houston Texans, recording 3 tackles and a forced fumble.

Here are some of the best highlights of Akiem Hicks’ career:

“I’m perfectly respectful. I’ll tell you what, you will not joke about an injury. You have a blessed day, this is the last time I’m on this radio station.” – Akiem Hicks

“13 years on air and with other athletes has no bearing when it comes to right and wrong. And you making light of a serious injury is not what athletes come on the show for.” – Akiem Hicks

Now that you know all about Akiem Hicks’ net worth, and how he achieved success; let’s take a look at some of the lessons we can learn from him:

Your friends will believe in you and give you the courage and support you need. Your enemies will make you accomplish those goals.

There is not always an easy way out. Sometimes there is only one way to do things and that is the hard way. Too many times people look for the easiest or the fastest way to get something done.

It does not matter how expensive or luxurious your possessions are if you have done nothing to earn them. Having great things means nothing if you haven’t earned them.

How much is Akiem Hicks worth?

Akiem Hicks’ net worth is estimated to be $89 Million.

How old is Akiem Hicks?

How tall is Akiem Hicks?

Akiem Hicks is an American football player defensive end who made his NFL debut in 2012 for the New Orleans Saints.

What do you think about Akiem Hicks’ net worth? Leave a comment below.