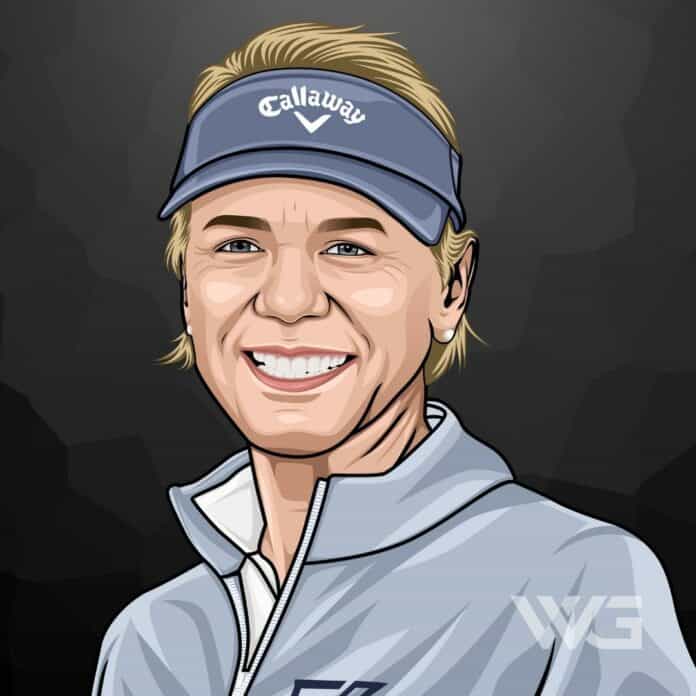 What is Annika Sorenstam’s net worth?

Annika is one of the most successful female golfers in the world. She is the only female golfer to shoot a 59 in competition and has 90 international tournament wins.

She has been on the professional circuit for more than a decade and is acknowledged as the best golfer in Lady’s Professional Golf history.

As of February 2023, Annika Sorenstam’s net worth is estimated to be $40 Million.

Her father is a resigned IBM official, and her mother used to work at a bank. Annika’s sister, Charlotta became an expert golfer who currently mentors her sister’s golfing academy.

Annika’s love of golf developed at the age of 12. She was a part of the Swedish national team from 1987 up to 1992 and then attended the University of Arizona where she earned multiple titles and won the world amateur championship.

Her amateur career was incredibly successful and she went on to win three tournaments on the Swedish Golf Tour in the 1990 season.

During a collegiate event in Tokyo, she became the first freshman that was non-American to win the individual NCAA Division I Championship.

Annika began her professional career officially in 1992 even though she missed her LPGA Tour card that year.

In 1996, Annika won the LET tournament and went on to win her second Vare Trophy. In 1997 she won six tours and defended her home title at the Compaq Open.

Sorenstam won the 2000 Welch’s/Circle K Championship, which almost made her eligible to be inducted into the World Golf Hall of Fame. She eventually became eligible in 2003 after completing her tenth year on the LPGA tour.

In 2001, Sorenstam became the first female golfer to achieve a 59 in competition. The following year, she defended her Kraft Nabisco Championship and won the ANZ Ladies Masters while in Australia.

Later in the season, she went on to win the LPGA Championship and won the Women’s British Open.

She has won a total of twenty-two LPGA records and holds five titles worldwide. She ended the successful season with a Golf Writers Trophy given by the Association of Golf Writers.

Annika had multiple victories in 2005 and multiple awards, including becoming the first player to win three consecutive years in LPGA history at the LPGA championship.

Sprenstam enjoyed many successful seasons up until she announced her retirement from competitive golf in 2008.

Annika has earned a huge amount of prize money over the years, making her one of the richest women on the pro circuit.

She was also able to secure significant endorsement and sponsorship deals that increased her annual income substantially.

In 2022 she returned to competitive golf, earning $6,000 in prize money on the senior tour.

While no longer earning the fees that she once did, her return to the senior tour will see her compete for major prize money once again after almost 14 years.

This will surely see her increase her wealth as she is expected to dominate the field.

Annika is one of the wealthiest female athletes on the professional golf circuit as a result of her phenomenal talent.

While not a lot is known about her current financial situation, based on career results and endorsement contracts, Annika Sorenstam’s annual net worth is estimated to be around $40 million.

Little is known about Annika’s net worth over the years since she retired, but it has been reported that she has a net worth of approximately $40 million.

However, it is difficult to confirm this figure as she holds shares in various private investments which are not reported publicly.

Based on this assessment of her current net worth, she qualifies as one of the richest golfers in the world, and that includes the likes of Tiger Woods, Nick Faldo, Greg Norman, Gary Player, and Phil Mickelson, the second richest player.

Annika met David Esch at the Moon Valley Country Club in 1994. The two got married in 1997 but decided to file for divorce in 2005.

Two years after the divorce, she met Mike McGee who is the managing director of the brand business, ANNIKA.

They decided to get married at Lake Nona Golf and Country Club in 2009. The couple had two children, Ava Madelyn McGee and William Nicholas McGee.

Being one of the most successful female players ever, Annika has won a dazzling array of trophies and events.

She is now set to bring home more silverware as she joins the senior tour.

Here are some highlights from Annika Sorenstam’s career:

Sorenstam proved to be a phenomenal player, rewriting the record books with her ability to shoot extremely low scores throughout her career.

In 2008, Annika became an Ambassador of the United States Golf Association, becoming the second person after Arnold Palmer to hold this role.

How Does Annika Sorenstam Spend Her Money?

Annika has multiple endorsements from companies such as Rolex, Lexus, Pacific Links, and Cutter and Block.

She is also in partnership with 3M, which helps sponsor the ANNIKA foundation, and the two work together to help provide work and donations for charities globally.

Annika loves wine and her interest in farming and the winemaking process led her to invest in ANNIKA Vineyards. She may not be producing the most expensive wines in the world but she has a passion for the vintages her vineyard supplies.

Annika enjoys driving a luxury car and drives some of the most expensive cars in the world, although her favorite is said to be the Lexus.

Annika has enjoyed a successful career in women’s golf. She has played at country clubs and courses all over the globe and is set to continue her globetrotting on the senior tour.

Here are some of the best highlights of Annika Sorenstam’s career:

Sorenstam was vice captain of the European Solheim Cup teams in 2011, 2013, 2015 and 2017 and was a TV analyst for the LPGA Major Championship broadcasts.

Annika Sorenstam got to be as successful as she did by working hard and focusing on improving her game.

She wasn’t too concerned about what other people were doing, preferring to concentrate on the things that she had control over and could improve.

Here are our favorite quotes from Annika Sorenstam:

Annika learned that it was important not to rush, but rather let the game unfold and try to influence it in a calm and controlled manner.

She was confident enough to know that over the course of 18 or 36 holes, she would eventually be successful.

Annika has revealed how patience has helped her win her championships. Just know that you will achieve your goals, you just must be patient and know that things will eventually work out for the best.

2. Have A Balanced Life

Having a balanced life is important to help motivate you and help you focus on what you want.

3. Focus On You And Not Others

It’s nice to help the people you love, but if things start to negatively affect your life and career, then you need to know when to take a step back.

Annika’s many tournament wins have brought women’s golf huge mainstream media attention. She has also been an inspiration to young athletes worldwide, since breaking multiple records on the golf course.

Despite leaving competitive golfing, her passion still lies with the sport. She’s enjoyed her retirement and the seniors tour is sure to bring fresh excitement now that she’s decided to compete once again.

As of February 2023, Annika Sorenstam’s net worth is estimated to be $40 Million.

What do you think about Annika Sorenstam’s net worth? Leave a comment below.