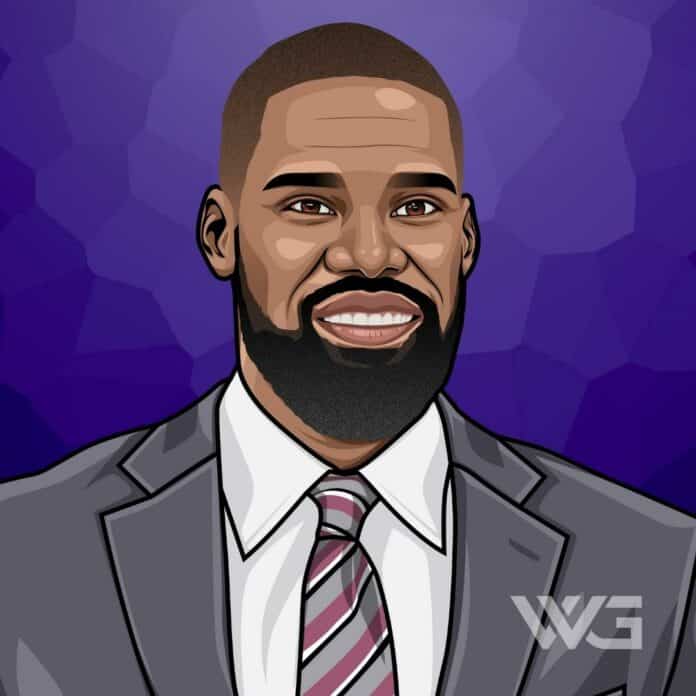 What is Antawn Jamison’s net worth?

Antawn Cortez Jamison is an ex-professional basketball player in the NBA and broadcaster for Time Warner Cable Sportsnet.

He had great success in his basketball career, playing 16 seasons in the NBA.

Antawn has changed the lives of many through his scholarships and a campaign called “A Better Tomorrow”, which he wants to use to provide the less fortunate a chance at a better future.

As of February 2023, Antawn Jamison’s net worth is estimated to be $60 Million.

His parents gave him the name “Antwan,” but the hospital misread it on his birth certificate as “Antawn.” Although the mistake was never fixed, the pronunciation of “Antoine” remained unchanged.

At Quail Hollow Middle School in Charlotte, North Carolina, Jamison participated in basketball and football as a quarterback.

He went on to play high school basketball at Providence High School in Charlotte. There, he was selected a McDonald’s All-American following a senior season in which he averaged 27 points, 13 rebounds, and 4.5 blocks per game.

Jamison averaged 19.0 points and 9.9 rebounds per game while playing three seasons of collegiate basketball for the University of North Carolina at Chapel Hill.

He received the Naismith and Wooden Awards in his junior year for being the best men’s college basketball player during the 1997–98 season.

Jamison made the decision to bypass his last year of eligibility and join the NBA draft in 1998.

Later, he went back and completed a B.A. in Afro-American and African studies, receiving his diploma in August 1999.

Jamison played for the Warriors for the first five years of his NBA career. He set a career-high with 51 points in back-to-back games against Seattle and the Lakers (the Warriors won that game). In 2000-01, his third season in the league, he averaged a career-high 24.9 points per game.

Antawn played for the Dallas Mavericks from 2003 to 2004 and won his first NBA season. He joined Dirk Nowitzki, Luka Doncic, and DeAndre Jordan as one of their star players.

He was then selected to the NBA All-Star squad for the first time in his career during the 2004–05 season with the Wizards, and they had their best season in 26 years, with a 45–37 win-loss. Additionally, they qualified for the playoffs for the first time since 1997 and made it through the first round since 1982.

Antawn represented multiple teams in the NBA, notably the Cleveland Cavaliers in 2010 and 2012.

After a successful career, he retired in 2014 and became a Time Warner cable Sportsnet TV analyst.

The Los Angeles Lakers hired Jamison as a scout on October 3, 2017. He then started working for the Wizards as their director of pro personnel in August 2019 and he is now involved in coaching as well.

After making his fortune playing basketball, Antawn moved into sports commentating to provide expert analysis of the games while they were broadcast.

He was enticed back to the Wizards as a scout and is now coaching and their director of personnel.

With his impressive run over 16 seasons in the NBA, we are sure that Antawn will make a huge impression on any team that he coaches.

Antawn Jamison was once considered one of the most overpaid athletes in the NBA. As a result of injuries and a relatively lackluster performance during the season, Antawn’s contract looked very over-priced.

However, he came back strong and proved his worth to all the doubters who failed to have confidence in him.

Here’s a breakdown of Antawn Jamison’s annual net worth:

With Antawn now coaching in the NBA, he is sure to add significantly to his fortune.

He has the ability to motivate and inspire his team to great heights and time will tell if it is enough to succeed as a coach.

Jamison has two brothers, Latosh and Albert Jamison, as well as a sister. Not much is known about Antawn’s personal life, but he’s been happily married to Rucker Jamison since 2003 and they have four children .

In 2003, Jamison presented his first Antawn C. Jamison Scholarship at his old high school. In order to provide the less fortunate a chance at a better future, Jamison has also started a program he calls “A Better Tomorrow.”

As for the project, he says:  “As a professional athlete, I have an obligation to help those less fortunate. I really enjoy being in a position to aid my community – both in the Bay Area and back home in Charlotte – and putting a smile on somebody’s face. That is what it is all about.

You can catch up with Antawn on his official Instagram account to see what he’s doing now.

After playing for 6 different NBA teams, Antawn contributed to enough wins to secure his place in the history of the NBA.

Here are some of the more memorable moments from Antawn Jamison’s career:

Antawn is one of only 2 players that have not been elected to the Basketball Hall of Fame despite their 20,000-plus points tally over the course of their professional career.

What makes Jamison’s exclusion even harder to explain is that he exemplifies the true spirit of the NBA. He wasn’t the flashiest, loudmouth player, making headlines for all the wrong reasons, but rather a true ambassador for the sport of basketball.

How Does Antawn Jamison Spend His Money?

Antawn Jamison has always been a clean-cut, no-nonsense player who avoided controversy and kept away from drugs, excessive partying, and illegal behavior.

Jamison loves cars, especially the most expensive cars in the world and his favorite is the Bentley GT.

When he made his first big pay cheques, he moved his family out of their modest home into a mansion in the most expensive part of town.

Jamison has never been a flashy player, so his critics have aimed their criticism at him for not being able to make a huge impact on the game, especially when the team is behind.

But that is not Jamison’s way. He prefers to calmly make his way through the game, picking up points here and there and occasionally making an unbelievable shot from an odd angle.

Here are some of the best highlights of Antawn Jamison’s career:

Jamison wasn’t a flashy player and his teams did not have the best winning streaks of the top teams in the NBA. For this reason, it is easy to overlook just how dominant he was in the 16 seasons that he played professional basketball.

Jamison was a steady, consistent scorer with a career average of 18.5 points per game. He averaged 7.5 rebounds and his shooting stat of 45.1% from the field is equally impressive.

Jamison holds traditional values and is not interested in the inflated egos that go with the modern game.

His effects on the team go beyond the court and basketball and extend into the future of each player that is involved.

Here are our favorite quotes from Antawn Jamison:

Antawn’s traditional approach to sport is a refreshing change from the big egos and constant media attention that seems to go along with bad behaviour in the NBA.

Jamison demands respect and is not shy to express exactly what he expects from his players.

1. Keep Your Head Up

Antawn spoke about struggling sometimes throughout his career but always kept his head up and kept going, not just for himself, but for his team.

It is easy sometimes to let the critics get inside your head and it takes courage and real guts to pick yourself up and keep going. But to succeed, that’s just what you have to do.

He believes in helping others, no matter who it is, and through his work, he’s been able to help many people improve their lives.

It sometimes takes very little to be supportive of someone who needs help. A kind word or just taking the time to listen, can make the world of difference to someone who is having difficulties.

3. Get A Little Buzz Going

It is important that when things are not going well, you create noise around the small things. It’s that buzz that will get you excited and great things can happen.

Nature abhors a vacuum, so when things are not going according to plan, filling up the silence with excitement and movement is sometimes all it takes to change the course of events.

Throughout his career, Antawn has shown that he’s one of the best, despite not always being appreciated for his efforts. Through his scholarships, he shows youngsters that he cares about their future and that their best efforts are noticed and rewarded.

He will go down in history as one of the best players in the sport of basketball, who made his fortune through talent and by doing the right thing.

As of February 2023, Antawn Jamison’s net worth is estimated to be $60 Million.

What do you think about Antawn Jamison’s net worth? Leave a comment below.