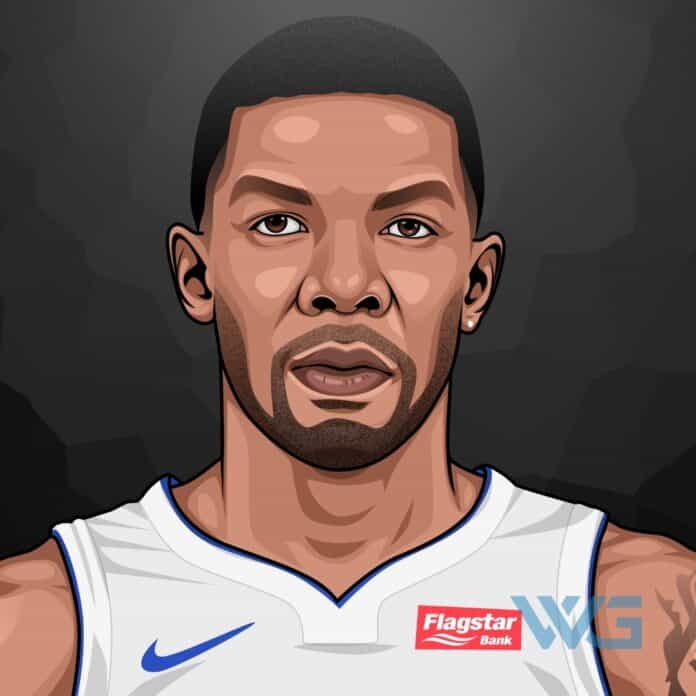 What is Joe Johnson’s net worth?

Joe Johnson is a retired professional basketball player who is regarded as one of the greatest scorers of his generation.

He played 18 seasons in the NBA, picking up the nickname “Iso Joe”  while playing for various top teams, such as the Atlanta Hawks, Brooklyn Nets, Boston Celtics, and Miami Heat.

Joe led the Atlanta Hawks to several playoff appearances and was known for his clutch shooting.

His mother, Sarah Diane Johnson, worked as a nurse in a state psychiatric institution and raised him as a single parent.

Unfortunately, he lost his brother, Tony, while he was young and then lost his mother to bone marrow cancer in 2019.

Joe attended Little Rock High School where he got involved in a variety of activities, including becoming a member of the William E. Thrasher Boys and Girls Club.

It wasn’t until college that he started to play basketball seriously and, as a freshman at Arkansas in 1999, he averaged 16.0 points per game.

Joe received an honorable mention as an All-American during his second season and participated in 30 games, averaging 14.2 points, 6.4 rebounds, and 2.6 assists from 2000 to 2001.

This led to his 10th overall pick by the Boston Celtics in the 2001 NBA draft, joining Jayson Tatum, Evan Fournier, Kemba Walker, and Isiah Thomas at the prestigious club.

After a year with the Boston Celtics, he was traded to the Phoenix Suns in 2002 and played with them up until 2005.

He then became a free agent and signed a $70 million contract with the Atlanta Hawks, home to star players like Lou Williams and Royal Ivey.

With his impressive performances with the team, his contract was extended for another six years in 2010.

Only two years into his extension, he was traded to the Brooklyn Nets in 2012 and played briefly with the Miami Heat at the end of his time with the Nets in 2016.

On leaving the Miami Heat, he decided to join the Utah Jazz in 2016 and played with them up until 2018. He signed a contract in 2018 with the Houston Rockets and with the Detroit Pistons the following year.

He signed with the BIG3 in 2019 and returned to the NBA to sign a contract with the Detroit Pistons, having impressed the BIG3 to the extent that he was awarded Most Valuable Player.

Johnson won his first BIG3 championship after defeating the Killer 3’s with the Triplets – winning his second BIG3 MVP title.

Joe competed in the 2020 Basketball Tournament with the Overseas Elite and recently signed a short contract with the Boston Celtics.

He made a lone basket, making him the second player other than Dirk Nowitzki to score with the same team at both 20 and 40 years old.

In 2021, Johnson made the 4-player roster for the 2022 FIBA AmeriCup qualification round and scored 11 points, and secured a team-best plus-25-point differential.

Their 93–77 victory over the Bahamas was followed by an 11 point victory over Mexico in a tough 96-75 nail-biter.

After a long and satisfying career, Joe decided that it was time to retire in 2022 and played his last game mid-season before announcing that it was his last time on the court.

2006 was a great year for Johnson, as he was selected to represent the USA at the 2006 FIBA World Championships.

He was one of 23 NBA players who were included on the roster for the 2006 to 2008 team, which came in third behind Greece, with Spain taking the FIBA title in 2006.

Here’s a breakdown of Joe Johnson’s annual net worth:

In the semi-finals of the 2006 World Championship, Greece ran out the winners in their clash with the USA, scoring 101 to the USA’s 95 points.

Joe was engaged to Candise Zepherin before calling it quits and during their time they were together, they had a daughter, Justice Johnson.

Currently, he is focusing on his career and being there for his child so that she grows up with him in her life.

Johnson appeared in his 1,072nd NBA regular season game against the Golden State Warriors, which matched Michael Jordan’s record of 77th on the all-time list, in November 2015.

Here are some of the most notable occasions in Joe Johnson’s career:

In February 2018, Johnson joined the Houston Rockets and, after spending a season with them, signed on to appear in the BIG3.

How Does Joe Johnson Spend His Money?

Joe is a big supporter of many charities, one of them being the Joe Johnson Fund for the Blind, which he has supported for many years.

After purchasing his current mansion located in Atlanta a few years back, he listed it for sale for $4.7 million.

He loves cars and trucks and owns some of the most expensive cars in the world including his huge Ford F-650 Super Truck XUV, which caused a lot of hype amongst his fans.

Only two years into his extension with the Hawks, he was traded to the Brooklyn Nets in 2012 and played briefly with the Miami Heat at the end of his time with the Nets in 2016.

On leaving the Miami Heat, he decided to join the Utah Jazz in 2016 and played with them up until 2018.

He signed a contract in 2018 with the Houston Rockets and with the Detroit Pistons the following year.

He signed up with the BIG3 in 2019 and returned to the NBA to sign a contract with the Detroit Pistons, having impressed the BIG3 to the extent that he was awarded Most Valuable Player.

Joe Johnson was overwhelmed with feelings of joy and trepidation after hitting the big time when he signed his first major contract.

Here are our favorite quotes from Joe Johnson:

Joe initially found solace in watching basketball in the gym until he discovered that he had the talent to emulate his heroes.

Now that you know all about Joe Johnson’s net worth, here are some of the best success lessons to learn from Joe Johnson:

1. There Will Always Be Tough Times

Life sometimes brings you down, but Joe found that the best way to deal with adversity was to carry on and be the best he could be.

Joe suffered through many hardships, from his brother dying at a young age and then his mother, whom he loved dearly, passing away before her time due to illness. Despite these setbacks, he did his best to make them proud, by achieving the best he could.

Having discipline in everything you do is important, especially when it comes to making decisions and adjusting to what life throws at you.

Joe found it difficult to have self-discipline at the beginning of his career, but soon taught himself how to cope and be more in control of his life.

3. No One Can Steal Your Thoughts

Joe explains that nobody knows your story and how you feel about it – which means they could never tell the story the way you would.

Joe never worried about what history would say, all that mattered to him was that his experience was authentic.

Joe scored a total of 20,000 points throughout the course of his career and inspired a generation of basketball-playing youngsters.

He played at the top level for some of the best clubs and became one of the highest-earning athletes in the world.

What do you think about Joe Johnson’s net worth? Leave a comment below.

Lee Shau-kee is a Hong Kong-based business magnate who has earned billions as the majority shareholder of Henderson Land Development.