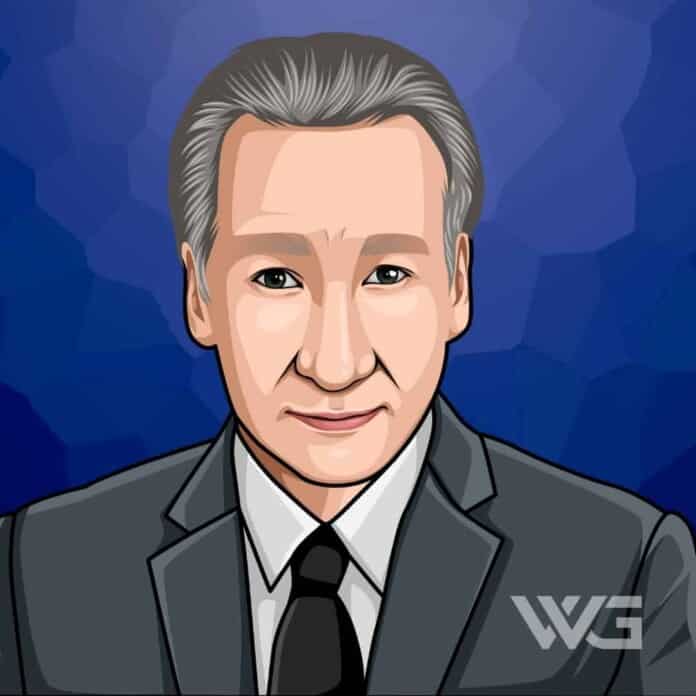 What is Bill Maher’s net worth?

Bill Maher is a famous American political talk show host, who has worked on numerous television networks as a commentator including FOX News and CNN.

He is famously recognized for comments on the popular talk show ‘Politically Incorrect,’ and he is the host of ‘Real Time With Bill Maher.’

The talk show host has made quite a name for himself in the media as he is often one to start controversy or speculation.

Bill was born on January 20, 1956, in New York City to Julie Berman and William Maher. His father was a network news editor, and a radio announcer and his mother worked as a nurse.

He was primarily raised as a Catholic, and when he was a teenager, he found out that his mother had a Jewish background.

Despite being born in New York City, Bill was predominantly raised in River Vale, New Jersey. He was enrolled in Pascack High School and later went on to attend Cornell University. He graduated from Cornell in 1978 with a bachelor’s degree in English.

In 1979 he started off his career as a host for a stand-up comedy show in New York City. After that, he began making regular appearances for televised comedians such as Johnny Carson and David Letterman. His debut in a feature film was in 1983 in the movie ‘D.C. Cab.’

Although, the appearance did not lead to his career taking off. Around this time he also made appearances as smaller characters in television shows including ‘Sara,’ ‘Ratboy,’ and ‘Max Headroom.’

He continued to play minor roles on TV until 1993 when he began hosting ‘Politically Incorrect’ his own political talk show on Comedy Central.

Maher continued acting as he played himself in the film ‘EDtv’ in 1998, in 2000 for ‘Be More Cynical,’ and the documentary ‘The Party’s Over.’

In 2003 he received his very own HBO talk show ‘Real Time with Bill Maher’ where he discusses political happenings and current events.

He appeared in the film documentaries ‘The Aristocrats’ and ‘Religious’ and made an appearance on the HBO show ‘True Blood.’

His comedy special ‘Bill Maher: But I’m Not Wrong’ came out in 2010 and in 2013 he was seen in the film ‘Iron Man 3’ as himself and in the television series ‘House of Cards.

Here are some of the best highlights of Bill Maher’s career:

“To a coward, courage always looks like stupidity.” – Bill Maher

“Anything is depressing if you dwell on it. The fact that religion could end the world? Yeah, I guess that could be considered depressing. But considering that there’s also a lot to laugh at, I think it’s a good balance.” – Bill Maher

“Don’t get so tolerant that you tolerate intolerance.” – Bill Maher

“We need more people speaking out. This country is not overrun with rebels and free thinkers. It’s overrun with sheep and conformists.” – Bill Maher

“Things aren’t right. If a burglar breaks into your home and you shoot him, he can sue you. For what, restraint of trade?” – Bill Maher

3 Rules for Success from Bill Maher

Now that you know all about Bill Maher’s net worth, and how he achieved success; let’s take a look at some of the success lessons we can learn from him:

Be smart and have the courage to always defend in what you think is right.

2. Have a good sense of humor

No matter how bad things may seem sometimes there’s always going to be something in life that can make you laugh. There will always be some positivity to outweigh the negativity.

Don’t be afraid to stand up for yourself and what you believe in. Don’t allow others to manipulate you into thinking that your opinions don’t matter. Stay true to what matters to you and what you know is right.

How much is Bill Maher worth?

Bill Maher’s net worth is estimated to be $140 Million.

How old is Bill Maher?

How tall is Bill Maher?

Bill Maher is a highly successful and controversial man. Throughout his career, he has worked on many different projects and has gained popularity as a talk show host, comedian, actor, and political commentator.

What do you think about Bill Maher’s net worth? Leave a comment below.