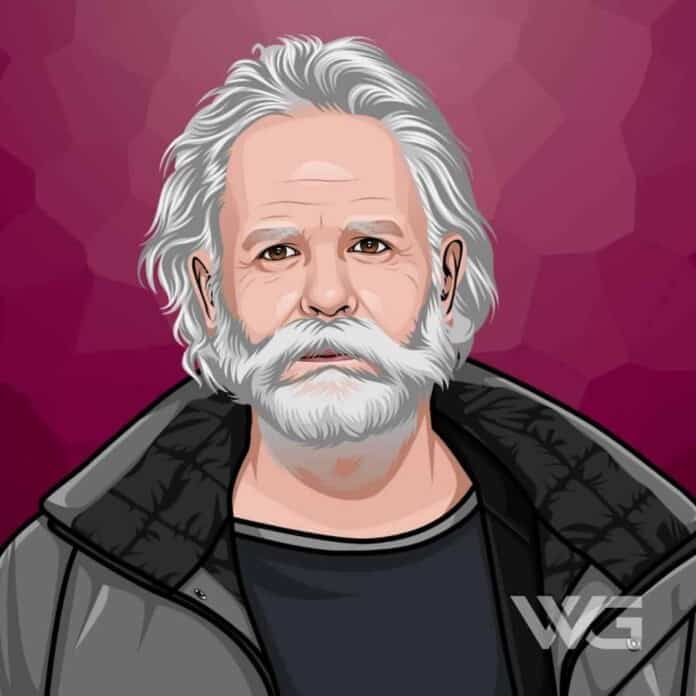 What is Bob Weir’s net worth?

Bob Weir is an American musician and songwriter.

Weir is best known as a founding member of the rock band Grateful Dead. After the band disbanded, Weir performed with The Other Ones, later known as The Dead, together with other former members of the Grateful Dead.

He also founded and played in several other bands during and after his career with the Grateful Dead, including Kingfish, the Bob Weir Band, and Bobby and the Midnites.

Robert Hall Weir was born on the 16th of October, 1947, in San Francisco, California.

Weir was raised by his adoptive parents, Frederic Utter and Eleanor Cramer Weir, in the suburb of Atherton.

Weir started to play guitar when he was 13 years old. He had trouble in school because of undiagnosed dyslexia and he was expelled from nearly every school he attended, including Menlo School in Atherton and Fountain Valley School in Colorado.

In 1963, Weir and an underage friend were wandering the back alleys of Palo Alto, looking for a club that would admit them, when they heard banjo music. They followed the music to its source, Dana Morgan’s Music Store.

He rose to fame when he played guitar and started to sing in the band Grateful Dead. Weir released his debut solo album ‘Ace’ in 1972. A live version of the album’s best-known song, ‘Playing in the Band’, had been issued on the Skull & Roses album of the previous year.

In 1995, he formed another band, RatDog Revue. Throughout his career, he performs covers of songs by various artists, including The Beatles, Bob Dylan, Chuck Berry, and Willie Dixon while also performing many Grateful Dead songs.

How Does Bob Weir Spend His Money?

Bob Weir spends some of his money on real estate and charity work.

Here are some of the best highlights of Bob Weir’s career:

“True. It’s like training wheels, I guess. It took me a while to get into songwriting gear. The next one I wrote when I was 19 or 20. I started to get into writing with the other guys. I was writing in tandem with Jerry and Phil particularly. And Pigpen would chip in as well.” – Bob Weir

“When Jerry was writing, he would do what he was gonna do. And then maybe he would bring it to the band and we would arrange it, more or less. So it was kind of a co-writing situation in that regard. And there was a lot of stuff we all co-wrote.” – Bob Weir

“The whole band playing together. Back then, we’d pretty much rehearse daily. A lot of that was jamming. And from that came a lot of music that we turned into songs. Then we’d apply lyrics to the best we could. Until Robert Hunter came along. Hunter changed that dynamic because he was just better at it than we were.” – Bob Weir

“If my memory serves me correctly, and it may not here, I think he was with us when we were working that one up. We were in Florida at a festival down there, and we had a day off, or a day when we weren’t scheduled to play until later in the day.” – Bob Weir

“Yes. Early on, Jerry and I worked up a lot of Everly Brothers tunes. And tunes of that nature, you know, country tunes. We patterned ourselves after the Everly Brothers [laughs]. Their style was fading then but they were hugely influential on us.” – Bob Weir

Now that you know all about Bob Weir’s net worth and how he achieved success; let’s take a look at some of the lessons we can learn from him:

Be as in touch with your dreams as you can be.

Everybody has something to bring to the table.

Grace isn’t enough. You’ve got to intend to be there when it’s happening.

How much is Bob Weir worth?

Bob Weir’s net worth is estimated to be $60 Million.

How old is Bob Weir?

How tall is Bob Weir?

Bob Weir is a successful musician who was born in San Francisco, California.

Weir met fellow Grateful Dead founding member Jerry Garcia in a moment of happenstance on New Year’s Eve 1963. Weir and a fellow teenaged friend were wandering the back alleys of Palo Alto.

Grateful Dead’s style was influenced by the music of The Beatles.

What do you think about Bob Weir’s net worth? Leave a comment below.