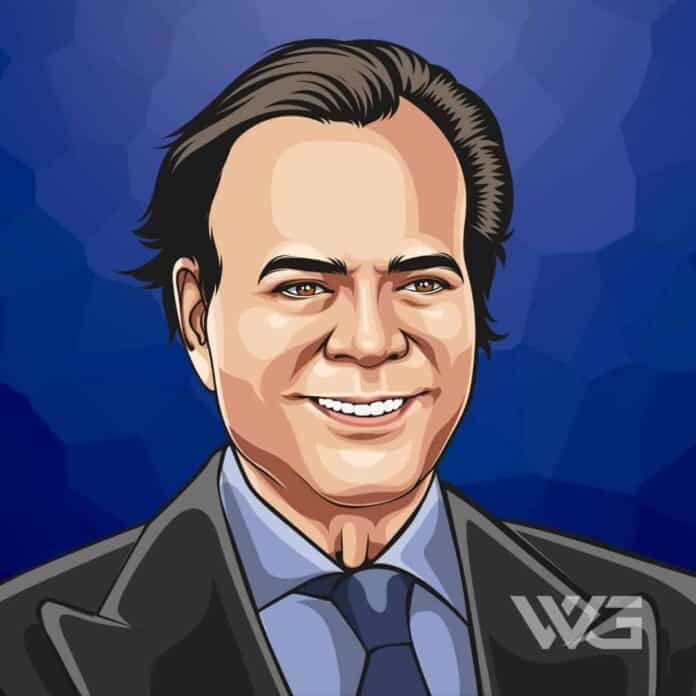 What is Julio Iglesias’ net worth?

Julio Iglesias is a Spanish singer, songwriter, and former professional footballer from Madrid.

Iglesias is recognized as the most commercially successful Continental European singer in the world and one of the top ten record sellers in music history, having sold more than 250 million records worldwide in 14 languages.

After high school, he studied law at the CEU San Pablo University in Madrid and played professional football as a goalkeeper for Real Madrid Castilla in the Segunda Division.

Julio got recognized as a singer in 1968 when he won an award at the Benidorm International Song Festival for his number ‘La Vida Sigue Igual’ from the movie with the same name.

In 1970, he represented Spain in the Eurovision Song Contest, where he performed the number ‘Gwendoline’ and stood fourth.

Besides Spanish and English, Julio Iglesias has performed in a number of languages including his number one hit, ‘Un Canto A Galicia’.

His album ‘De Nina a Mujer’ was followed by his first English hit ‘Begin the Beguine’ which peaked at number one on the British charts.

It was his hit album ‘1100 Bel Air Place’ that established him as an English language singer after which he went on to perform with pop stars like Willie Nelson, Stevie Wonder, Dolly Parton, and Diana Ross to release classic numbers that hit the top of the Billboard Hot 100 list.

He won the 1988 Grammy Award for his album ‘Un Hombre Solo’ in the Best Latin Pop Album category. Julio Iglesias became one of the best known international singers to have performed in several languages.

Here are some of the best highlights of Julio Iglesias’ career:

“You live a life, you have a family, you sing your songs and you do not think about these things. You just do them. And then one day, it all makes sense to you.” – Julio Iglesias

“The success my children have had has helped me immensely. I’ve shown them a certain respect for this career.”– Julio Iglesias

“I listen to people. That was a big reason for my life, maybe the main reason, I’m singing because I love it when people say to me, ‘Thank you.’ I thank them. It’s a marriage.”– Julio Iglesias

“When the painting is hanging on your wall for a long time, you don’t notice it. You get tired of it, even if it’s a Picasso. When the next generation inherits the painting, they sell it. I don’t want to be sold.” – Julio Iglesias

“We’re excited to be appearing in Tel Aviv in the framework of the Pic.nic festival. This is an important tour for us and we’re glad that Israel is part of it.”– Julio Iglesias

“You retire when you are sick and when you can’t do it anymore or when the public retires you. That’s the most painful because that’s the one that leaves you wanting to accomplish more.”– Julio Iglesias

Now that you know all about Julio Iglesias’ net worth, and how he achieved success; let’s take a look at some of the best lessons we can learn from him about life:

1. Your Career is Not Your Life

To be successful in this lesson, you should develop a breath to your list of activities and always put family and friends first. To do both well, think about activities that maximize your friends and relatives, like coaching your children’s sports teams.

Your life will be in constant change mode, and that is a good thing if you lead change in the direction of your success goals. To do that most successfully, you should have a good understanding of who you are and what direction you are going.

All of these lessons on success get better when you have a strong foundation in knowing how to stay happy. One big part of being successful in happiness is learning how to share kindness.

How much is Julio Iglesias worth?

Julio Iglesias’ net worth is estimated to be $600 Million.

How old is Julio Iglesias?

How tall is Julio Iglesias?

Julio Iglesias is one of the most popular Latin singers of the 70s and 80s.

He gained worldwide recognition by singing in a number of languages in his trademark style.  He has won a Grammy for Best Performance in Latin Pop for his album ‘Un Hombre Solo’ and has been honored by a star on the Hollywood Walk of Fame.

As of February 2023, Julio Iglesias’ net worth is approximately $600 Million.

What do you think about Julio Iglesias’ net worth? Leave a comment below.