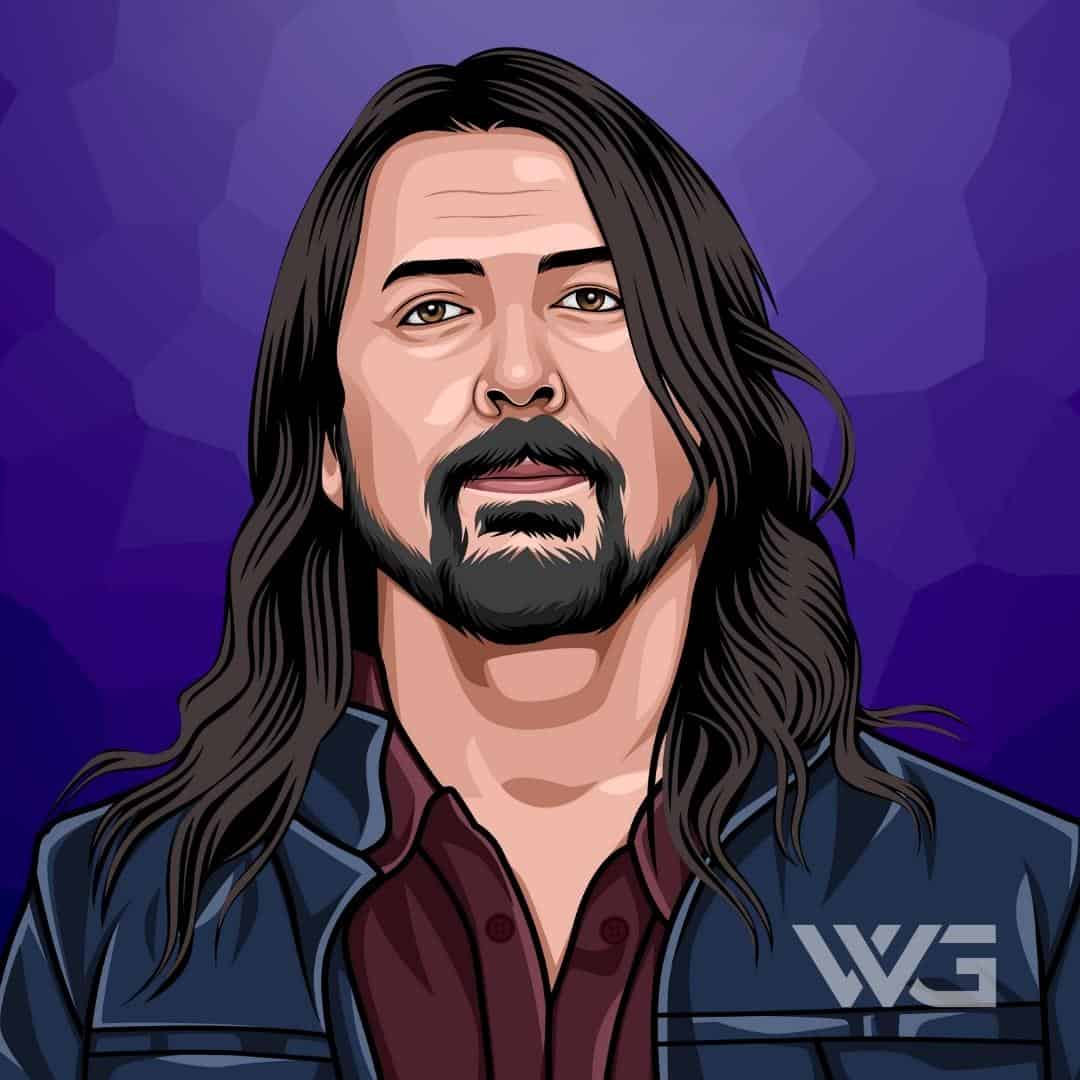 What is Dave Grohl’s net worth?

Dave Grohl is the founding member and frontman for the Foo Fighters.

He has an impressive background in rock music, including a stint as drummer in the ground-breaking band, Nirvana. Dave has been in the music industry since the age of 15.

Some of the less well-known bands that he’s played with include “Freak Baby”, “Mission Impossible”, “Dain Bramage” and “Scream”.

Grohl is also the drummer and co-founder of a rock group called “Them Crooked Vultures” and participated in a lot of side projects such as “Late!” and “Probot”.

It’s not hard to understand why Dave Grohl is one of the most influential rock musicians of the last 20 years.

Dave’s parents, Virginia Jean (a teacher) and James Harper Grohl (a news writer), were unaware of the great talent they’d brought into the world.

His father was a highly successful, award-winning journalist whose colleagues described him as “a talented political observer who possessed the ability to call every major election with uncanny accuracy”.

At the age of seven, Dave’s parents divorced. As was the norm in those years, his mother got custody, raising him on her own. At the age of 12, Dave dived into music and started learning how to play the guitar.

But structured lessons weren’t ideal for his temperament and he decided to teach himself. This led to him playing in a variety of bands with his friends.

At the age of 13, Dave and his sister spent their summer at their cousin Tracey’s house. Their cousin went on to introduce them to punk rock and took them to shows by popular local punk bands. Dave attended his first concert featuring “Naked Raygun” at “The Cubby Bear” in 1982.

Dave was a student at Thomas Jefferson High School in Virginia, where his class elected him vice president as a freshman. Before making his morning announcements, as class vice president, Dave would play pieces of songs by major punk bands over the intercom.

Due to his use of cannabis, Dave’s mother decided to transfer Dave to Bishop Ireton High School in Alexandra.

He was a part of a band called “Freak Baby” as a guitarist but was soon put on drums due to “Freak Baby” kicking out their bass guitarist and reshuffling their line-up. Following the line-up change, the band renamed themselves “Mission Impossible”.

Rush drummer, Neil Peart, was a big influence on Dave, and he found himself not going to lessons but simply listening to Rush and teaching himself the drums. After the breakup of “Mission Impossible”, Dave joined a hardcore punk band called “Dain Bamage”. In March 1987, Dave left “Dain Bamage” without warning and joined a band called “Scream”.

Dave’s transition into the band “Scream” wasn’t completely honest, as he lied about his age to make it in. He dropped out of high school during his junior years to be in the band. For the next four years, Dave toured with Scream and recorded a couple of live albums as well as 2 studio albums.

While playing in Scream, Dave became a big fan of the “Melvins”, eventually befriending them. Through befriending “Melvins”, Dave got to meet Kurt Cobain and Krist Novoselic from the band “Nirvana”.

Once “Scream” broke up, Dave called the guitarist of Melvins seeking advice on where to go next. The guitarist mentioned that Nirvana was looking for a drummer and gave him the band’s phone numbers.

In no time at all, Dave passed the audition and became part of the band. Dave joined Nirvana mid-way through recording several demos, just before releasing their debut album, “Bleach”.

Grohl spent the next few months traveling to several labels as the band received a great deal of interest based on the demo performance. Eventually, Nirvana signed with DGC Records.

In 1991, the band recorded “Nevermind”, which was a worldwide commercial success. During this time, Grohl finished recording his own material and released “Pocketwatch” on cassette in 1992. He released the cassette under the name “Late!”.

While working on his own material, Dave became a major contributor to songwriting for Nirvana. Cobain overheard Grohl working on a song called “Color Pictures of a Marigold” and joined in.

Soon, the two began working collaboratively on the song. They released “Color Pictures of a Marigold” as a B-side version on the “Heart Shaped Box” single and simply named “Marigold”.

Dave’s talent for music blossomed when he started writing and recording music during his breaks while working with Nirvana. After the tragic death of the lead singer Kurt Cobain, Dave looked for a new outlet, deciding to produce his own music. This culminated in the birth of the “Foo Fighters”.

Unfortunately, due to the tragic death of Cobain in April 1994, Nirvana soon found itself coming to an end. He quickly recorded a fifteen-track demo and performed all the instruments himself.

When he failed to receive much interest, Dave wondered if his career would always be drumming for other bands. After turning down an invitation to become “Tom Petty and the Heartbreakers” drummer, Dave performed with “Pearl Jam” for two or three shows.

After a while, the demo he’d recorded started to receive some interest from the record labels.

This prompted Dave to start recruiting band members, which was the start of the legendary band, the Foo Fighters. After releasing four successful albums, Grohl found himself at the top of the Billboard Modern Rock chart.

All told, the band has released 10 albums to date and had their 10th album reach number three on the Billboard 200 in 2021.

Here’s an overview of Dave Grohl’s earnings throughout his career. These figures are compiled from estimated income earned from royalties, album sales, and acting fees.

His other sources of income include income from his business investment as well as movie and other entertainment fees and endorsements.

It is little wonder that Dave Grohl has an enormous amount of wealth. With the level of success he’s achieved combined with his understated lifestyle, he’s created a huge portfolio of investments that will continue to grow, no matter what happens.

Here’s a breakdown of Dave Grohl’s annual net worth:

Dave Grohl married photographer, Jennifer Leigh Youngblood in 1994 but divorced in December 1997. On the 2nd of August 2003, he married Jordyn Blum and had three children;  Violet Maye, Harper Willow, and Ophelia Saint.

In an interview in 2011, Dave revealed that he is going deaf in one ear due to decades of performing on stage. He’s ranked as one of the richest rockstars in the world and currently lives in a four-bedroom villa in Encino, California which you glimpse on his official Instagram account from time to time.

With more than 35 years of award-winning music behind him, Dave Grohl has a lot more to offer his fans.

Here are some highlights from Dave Grohl’s career:

How Does Dave Grohl Spend His Money?

Dave Grohl is not much of a spender, even with the huge amounts he constantly earns. Most of his money goes into savings and investments.

He’s not lavish in his spending and drives a family car, but has also revealed that he owns a Tesla. He describes the electric car as “impractical and stupid”. He doesn’t want to drive or own the most expensive cars in the world either.

He explained that he didn’t grow up with wealth and got into music because he‘s passionate about it, rather than for the money.

He used some of his wealth to create his own label, Roswell Records, and with his concern for a variety of causes, he supports at least 16 charities worldwide.

For a musician who is almost entirely self-taught, Dave’s talent for picking up and playing a wide variety of instruments is truly impressive. His skills have rightfully earned him a spot amongst rock’s superstars.

Here are some of the highlights of Dave Grohl’s career:

Despite his fame, Dave is a down-to-earth soul. He has a deep understanding of human nature, which shines through in his songs and during interviews.

Here are our favorite quotes from Dave Grohl:

Now that you know all about Dave Grohl’s net worth, here are some of the best success lessons to learn from Dave Grohl.

1. Passion Is The Driving Force of Creativity

Don’t do it for the money, do it for your passion.

Dave Grohl has always followed his passion for music. Even if he wasn’t the financial success he is today, he’d still be writing songs and playing music.

2. Opportunity Is Always Just Around the Corner

Once one door closes, another door opens.

It’s easy to become despondent when things don’t go the way you want. But, no matter how bad things appear on the surface, if you keep your eyes open, there’s an opportunity right in front of you.

3. Life is Not Easy But Tenacity Will Get You Through

The ability to keep going when things get tough is key to success in music and life. Dave has had his fair share of ups and downs, but his ability to stick to a course of action has paid dividends.

Dave Grohl is something of a legend in the music industry. From working with one of the most impactful bands of all time to creating his own successful band, he’s left his mark on the music industry. He did it all because of his love of music and is a role model for many fans.

Despite the tragic events he’s suffered in his life, he has grown as a musician and achieved an enormous level of respect in the music world.

What do you think about Dave Grohl’s net worth? Leave a comment below.