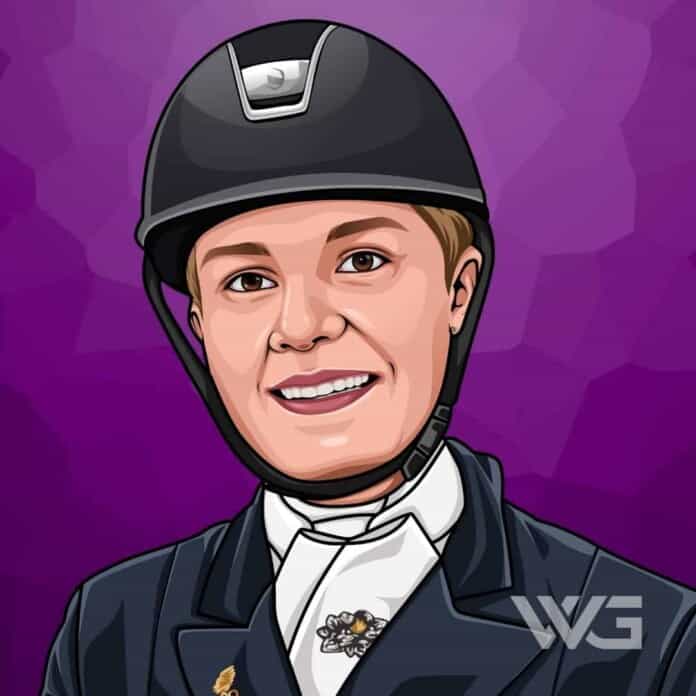 What is Anna Kasprzak’s net worth?

Anna Kasprzak is a Danish dressage rider and heiress to the ECCO company renowned for its quality shoes and other accessories.

Kasprzak has competed in multiple dressage tournaments, winning several bronze and silver medals throughout her career.

As of January 2023, Anna Kasprzak’s net worth is estimated to be $1 Billion.

Anna Kasprzak was born in Grevenbroich, Germany in December of 1989, with her late grandfather, Karl Toosbuy, the founder of the shoe company ECCO in 1963.

The huge success of the family business meant that Anna was raised around some of the richest people in the world, with the company generating millions of dollars in revenue.

Anna Kasprzak began her sporting career in her early 20s, riding in dressage contests throughout Europe and eventually competing at the Olympic games.

She has won many awards in her field over the years, including bronze medals at the 2008 Azeitao European Young Riders Champions in team dressage.

Outside of her activities in dressage riding, she is the heiress of the ECCO company’s fortune, inheriting the majority of the company when her father died in 2004.

The company manufactures high-end shoes and accessories using high-quality leather found in some of the most expensive cowboy boots you can buy.

While it isn’t possible to ascertain the exact career earnings of Anna Kasprzak, her net worth of $1 billion indicates she will have access to considerable sums of money each year.

Some estimates have placed her annual income as high as $90 million, and in one year Ecco paid out dividends of around $40 million, of which $20 million reportedly went to Anna Kasprzak.

With her vast net worth, Anna Kasprzak’s fortune puts her close to becoming one of the richest women in the world, and her wealth continues to increase year on year.

This increase is a reflection of the ongoing success of the family’s shoe company, which has a net income of €23.14 million as of 2020.

For the same year, the company enjoyed revenue of over $1 billion, securing Anna Kasprzak’s huge net worth for the foreseeable future.

Since Anna Kasprzak prefers to keep a low profile, little is known about her personal life, with the dressage rider known for avoiding the media spotlight.

According to a report from Forbes magazine, Kasprzak is in a relationship and has one child, although no further details about her partner or child are given.

Anna Kasprzak has participated in many dressage competitions throughout her career, including at the Olympic games on two occasions.

Here are some highlights from Anna Kasprzak’s career:

How Does Anna Kasprzak Spend Her Money?

As heiress to the fortune from the ECCO company, Anna Kasprzak’s fortune is comparable to some of the richest athletes in the world, allowing her to lead a luxurious lifestyle.

Her net worth of $1 billion gives Kasprzak the ability to invest in some of the most expensive houses in the world, although her residence is unknown as she leads a reclusive life.

Anna Kasprzak has enjoyed a successful career as a dressage rider, entering dozens of competitions over the years.

Here are some of the best highlights of Anna Kasprzak’s career:

While Anna Kasprzak prefers to avoid speaking to the press, she has been interviewed by specialist outlets dedicated to covering her dressage riding career.

Here are our favorite quotes from Anna Kasprzak:

Now that you know all about Anna Kasprzak’s net worth, let’s take a closer look at some of the valuable life lessons we can learn from her experiences.

Here are some of the best success lessons to learn from Anna Kasprzak:

1. Never Let Failure Put You Off From Working Hard

It took Anna Kasprzak several years before she was able to ride at the Olympic Games, returning at each opportunity in spite of her failure to secure a medal.

Don’t let failure stop you from trying to reach your dreams, instead taking what lessons you can when you don’t succeed.

2. Keeping A Low Profile Can Be Better Than Shouting From The Rooftops

Anna Kasprzak may well be one of the youngest billionaires in the world, but she doesn’t flaunt her wealth.

Her low-key approach to media and attention offers a valuable lesson in humility.

3. Don’t Be Afraid To Pursue Your Own Path In Life

While her brother is happy to invest his time and energy in helping to run the family business, Anna prefers to go her own way.

She avoids spending time working at ECCO so she can focus on horse riding and looking after her successful stables.

So there you have it, all the details you need to know about dressage rider and billionaire heiress Anna Kasprzak’s impressive net worth.

Her sporting career has seen her win multiple bronze and silver medals in a series of tournaments throughout Europe.

With ECCO continuing to expand its business around the world, her net worth is likely to continue to grow, so make sure you check back on this article for the latest information.

As of January 2023, Anna Kasprzak’s net worth is estimated to be $1 Billion.

What do you think about Anna Kasprzak’s net worth? Leave a comment below.