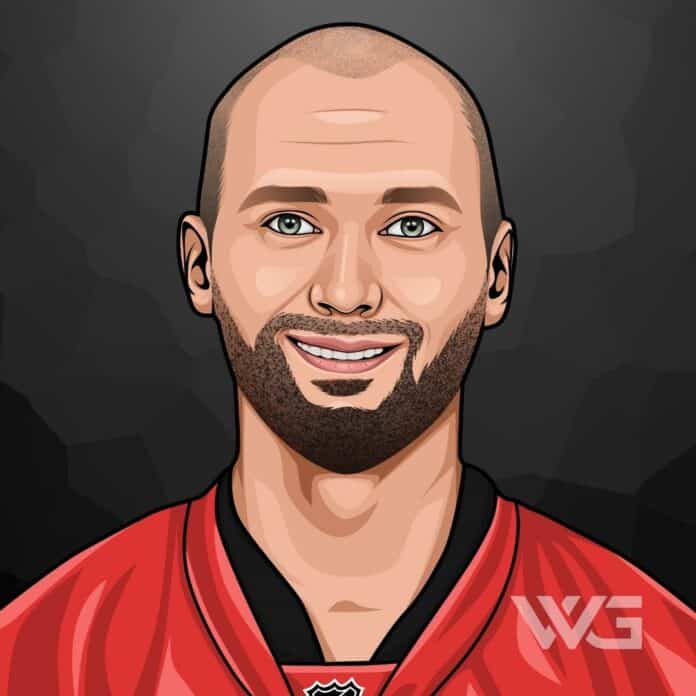 What is Brian Rafalski’s net worth?

Although he retired from the Detroit Red Wings in 2011, Brian Rafalski has remained one of their most beloved and iconic players.

During his career, Rafalski earned millions as a defenseman and won three Stanley Cup titles.

As of January 2023, Brian Rafalski’s net worth is estimated to be $45 Million.

Brian Rafalski was born September 28, 1973, in Dearborn, Michigan, and he played in the Quebec International Pee-Wee Hockey Tournament as a child.

Rafalski also played as an amateur for the Madison Capitols in the United States Hockey League, participating in 47 games between 1990 and 1991, where he scored 12 goals and earned 11 assists.

During college at the University of Wisconsin-Madison, Rafalski played hockey for four years, where he was named to the WCHA First All-Star Team.

Although Rafalski has chosen to keep information about his childhood private, we do know that he always had a passion for hockey and pursued it relentlessly, even as a young boy.

During his career with the NHL, Rafalski won the Stanley Cup three times and participated in five Stanley Cup final games.

Rafalski also played in three Olympic Ice Hockey tournaments as a member of the United States men’s team, and at the 2002 Winter Olympics, he was awarded a silver medal for his talent.

In the 2010 Olympic games, Rafalski was a fill-in for the United States captain, earning the title of Best Defenseman for his skills.

Rafalski signed with the Detroit Red Wings in 2007 as an unrestricted free agent, and he remained with the team until 2011, when he announced his retirement from the NHL, choosing to walk away during the final year of his contract.

In 2014, Rafalski briefly returned to the rink when the Florida Everblades signed him to a contract after he expressed an interest in re-joining the NHL, but he was released 18 days after signing due to back issues.

Brain Rafalski worked hard to become one of the best defensemen in the sport, and his career earnings reflect just how valuable he was before his retirement.

While he falls just short of being one of the richest hockey players in the world, Rafalski has made more than most people could hope to in their entire lives in only a few short years.

Brian Rafalski is married to a woman named Felicity, and the couple has three sons, Danny, Evan, and Matthew, who were born in 1997, 2000, and 2004 respectively.

Rafalski has a degree in Economics from the University of Wisconsin-Madison and has stated that he regularly listens to Glenn Beck, a conservative radio talk show host.

Although we know that Rafalski lives in Waupaca, Wisconsin, with his family, little else is known about his personal life, as he doesn’t have any social media and tends to stay tight-lipped about what he does outside of the rink.

However, we do know that at least one of his sons, Matthew, has followed in his footsteps as a hockey player, joining the Alps Hockey League as a junior player.

Brian Rafalski has received many awards and honors throughout his career in the rink.

Although he may not be the most well-known in the sport, he is certainly one of the most decorated.

Here are some highlights from Brian Rafalski’s career:

How Does Brian Rafalski Spend His Money?

Unlike Wayne Gretzky, we have little to no information as to how Brian Rafalski spends his money since he does his best to live outside of the spotlight.

We know that he lives in Waupaca, Wisconsin, and can assume his house is fairly luxurious, but the hockey star has been less than forthcoming with details.

While he could certainly choose to live in one of the most expensive cities in the US, Rafalski appears to enjoy a quieter, more modest life, which we certainly can’t fault him for!

There have been many milestones throughout Brian Rafalski’s career that have helped his rise to fame.

However, some points in his career stand out more than others for their significance.

Here are some of the best highlights of Brian Rafalski’s career:

Although Brian tends to keep a low profile, he has said some interesting quotes in the rare interviews he does give.

There is a surprising amount of wisdom to be gained from this professional hockey player.

Here are our favorite quotes from Brian Rafalski:

Now that you know all about Brian Rafalski’s net worth, we can look at what his impressive career can teach us about reaching our own goals.

Here are some of the best success lessons to learn from Brian Rafalski:

1. You’re Going To Have To Work Hard

When trying to achieve your goals, you will have to do a lot of hard work, no matter what they are.

If you’re not willing to put in the time and dedication, you will only fall behind everyone else.

2. Don’t Beat Yourself Up

When something doesn’t go to plan, the worst thing you can do is beat yourself up about it.

Instead, take note of what went wrong, pick yourself up, and get back to work!

3. Strive To Do Better

Every time you succeed, you should make it a priority to try and one-up yourself with your next success.

By consistently trying to do better, you will improve your skills further instead of becoming complacent.

Brian Rafalski has left a lasting legacy in hockey and earned millions as one of the most talented defensemen in the sport.

Although he is retired now, he has more than enough money to live out the rest of his life in remarkable luxury.

Make sure to check back often to stay up-to-date on any changes that may affect Rafalski’s net worth.

As of January 2023, Brian Rafalski’s net worth is estimated to be $45 Million.

What do you think about Brian Rafalski’s net worth? Leave a comment below.

What is Marlon Wayans' net worth? Introduction  As of ,...