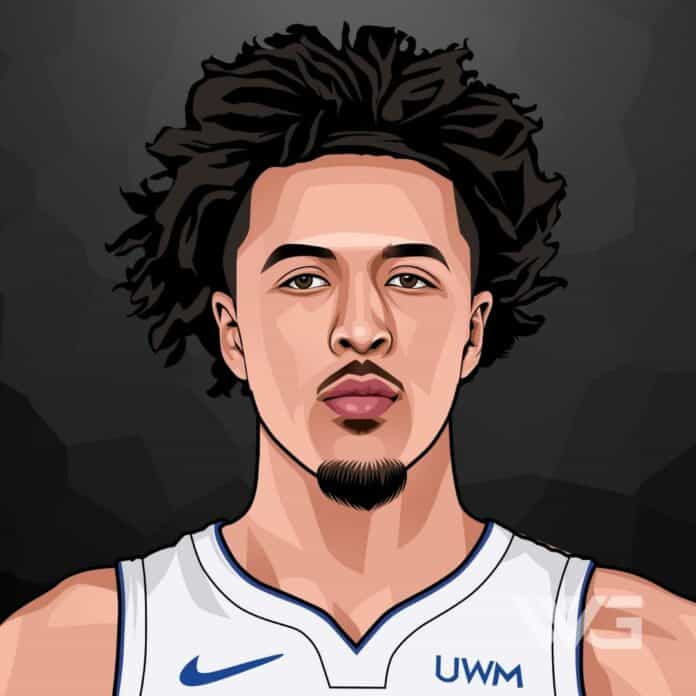 What is Cade Cunningham’s net worth?

Cade Parker Cunningham is the current point guard for the Detroit Pistons and has played for them since being drafted in 2021.

A rising star in the NBA, Cunningham has quickly made a name for himself as one of the most talented players on the court.

Since his career has just gotten started, we can expect to see a lot more of him in the future as he continues building his fortune.

As of February 2023, Cade Cunningham’s net worth is estimated to be $4 Million.

As a child, he played football as a quarterback, which he credits for making him a better passer and leader now as a professional basketball player.

He was inspired to start playing basketball himself after watching his brother play at college.

At Barnett Junior High School, he played the point guard position while also playing for the Texas Titans in the Amateur Athletic Union.

Cade attended Bowie High School and became a starter on the varsity team during his freshman year.

At the beginning of his junior year, he transferred to Montverde Academy, where the basketball team was ranked No. 1 in the country.

As a senior at Montverde, his team was regarded as one of the best in high school basketball history, and he finished his last season with the honors of Naismith Prep Player of the Year and MaxPreps National Player of the Year.

For college, he opted to attend Oklahoma State University, where he earned Oscar Robertson National Player of the Week honors.

He also became the first Oklahoma State player to be recognized as a consensus first-team All-American since Bob Kurland in 1946.

In 2021, he announced his entry into the NBA draft, forgoing his remaining college eligibility after his freshman year.

Cade Cunningham was selected as the first overall pick of the Detroit Pistons in the 2021 NBA draft, and he made his debut with the Summer League in August.

In October, he made his official NBA debut against the Orlando Magic, earning two points, six rebounds, and two assists in 26 minutes.

Cade became one of the only rookies in the NBA to earn 34 points, eight rebounds, eight assists, four blocks, and two steals in a single game during a match against the Denver Nuggets in January 2022.

By the end of the season, he finished third in Rookie of the Year voting, falling just behind Evan Mobley and Scottie Barns.

Cade Cunningham may not be as wealthy as DeMar DeRozen or Draymond Green, but in a few years, he may very well surpass them.

Since joining the NBA, his yearly earnings have been steadily increasing as his skills gain him the recognition he deserves.

Cade Cunningham has done exceptionally well for himself, considering he has only just started his career.

It is very likely that he will become one of the richest NBA players in the world, given that his salary continues to increase each year.

Cade Cunningham welcomed his daughter, Riley, in 2018, though he hasn’t gone public with who the mother is or if he is currently in a relationship.

On his official Instagram account, he has posted a few personal pictures with his daughter but largely seems to keep his personal life out of the public eye.

He is also active on his official Twitter account, where he interacts with fans and keeps them updated about his career.

While he has shared few details of his life off the court, we do know that he has been a dedicated vegan since 2019.

Like Carmelo Anthony and Kyrie Irving, Cade Cunningham has earned many distinctions during his basketball career.

While he has earned many awards since he started playing, we’ve chosen to highlight some of his most important.

Here are some of Cade Cunningham’s most significant career awards and achievements:

Although these are only a few of the awards and titles he’s won, they are the ones with the most significance.

As he continues his career, it is likely he will rival even LeBron James in terms of accolades earned for his skills on the court.

How Does Cade Cunningham Spend His Money?

Despite being one of the hottest stars in the NBA, little is known about how Cade Cunningham spends his money.

While we know he must live in the Detroit area, he has yet to release information about his house or how much he’s spent on it.

Although fans are eager to learn more about how he is spending his newfound wealth, he appears to want to remain private about it for the time being.

That said, we can certainly imagine him splurging on some of the most expensive Air Jordans in the world because every pro basketball player needs at least one pair.

Cade Cunningham has enjoyed many memorable moments during his career, each of which has helped him progress as a professional.

Although he has a lot of milestones to choose from, we’ve decided to highlight the ones that have impacted his career the most.

Here are some of the best highlights of Cade Cunningham’s career:

These moments in his career have been the ones that have helped him get ahead the most while also setting him apart from other professional basketball players.

We definitely look forward to seeing what milestones he will set in the future, seeing as he’s already off to an amazing start.

There is a lot that we can learn from Cade Cunningham and his impressive career as a professional basketball player in the NBA.

Now that you know all about Cade Cunningham’s net worth, we can take a closer look at what he can teach us about reaching our own goals.

Here are some of the best success lessons to learn from Cade Cunningham:

1. Always Give You All

Don’t half-ass anything if you can help it, because that will never help you get ahead or reach your goals.

No matter what you’re working on, you should always give 100% so that you can show off the full extent of your skills and value.

2. Don’t Back Down From A Challenge

If you want to become successful, you can’t afford to back down from a challenge without at least giving it your best.

Taking on challenges can be a great way to test your limits and build skills that can help you get closer to your goals.

No one can do everything on their own, which is why surrounding yourself with people you can rely on is important.

Try to select people whose skills complement your own so that they can help you with the things you struggle with the most.

Cade Cunningham has quickly become one of the rising stars of the NBA, and his career has only just started getting off the ground.

Since his career is so new, it is expected that he will continue playing for many more seasons, potentially becoming one of the most famous players in the history of the sport.

Make sure to check back often so that you won’t risk missing any important updates on Cunningham’s career and increasing wealth.

As of February 2023, Cade Cunningham’s net worth is estimated to be $4 Million.

What do you think about Cade Cunningham’s net worth? Leave a comment below.