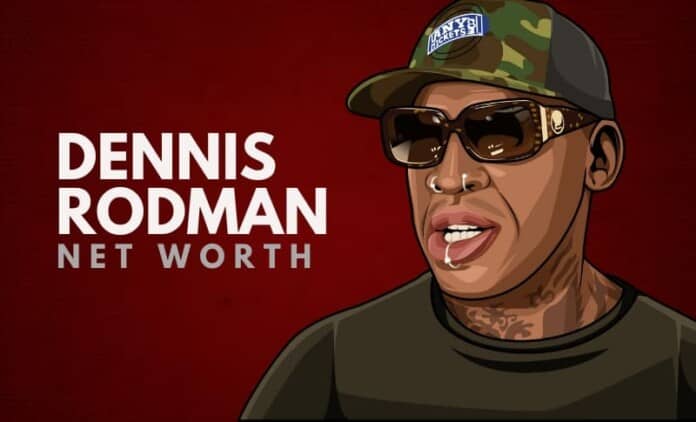 What is Dennis Rodman’s net worth?

Dennis Keith Rodman was born on the 13th of May, 1961, in New Jersey. Rodman is the son of Shirley and Philander Rodman, Jr.

After Rodman’s father left his family, he grew up with his mother and two sisters, Debra and Kim, in the Oak Cliff section of Dallas. His mother took up several jobs to make ends meet.

Dennis Rodman was drafted by the Detroit Pistons in 1986. Detroit Pistons won 52 games to make a place for themselves in the 1987 NBA Playoffs. In the next season 1987-88, Rodman played consistently well registering an average of 11.6 points and 8.7 rebounds.

He was on the bench for the next season through 1988-89 averaging 9.0 points and 9.4 rebounds in 27 minutes. The Pistons eventually reached the finals and beat Lakers.

Rodman battled back spasms to put up a tough defence with 19 rebounds. Piston won the championship for two consecutive years and Rodman became one of the main players to have contributed to the clubs’ victories.

In 1992, he won the first of the seven consecutive rebounding crowns. In 1993, the coach of the Pistons, Chuck Daly, whom Rodman looked up to as a father, resigned after which Rodman’s relationship with the club’s management got strained.

Rodman was once again traded and this time he joined the Chicago Bulls as a power forward in the 1995-96 season. This club already boasted popular players, such as Michael Jordan and Scottie Pippen.

After a long hiatus from the game, Rodman made several attempts at returning to basketball but could not repeat any of his on-field success and was eventually inducted into the NBA Hall of Fame in 2011.

In 2008, he once again tried a hand at wrestling by participating in Hulk Hogan’s Celebrity Championship Wrestling which he won.

Here are some of the best highlights of Dennis Rodman’s career:

“Why it’s been left to me to smooth things over, I don’t know. Dennis Rodman, of all people. Keeping us safe is really not my job; it’s the black guy’s [Obama’s] job. But I’ll tell you this: If I don’t finish in the top three for the next Nobel Peace Prize, something’s seriously wrong.” – Dennis Rodman

“The people at the top of the league think they need to rein me in so I don’t become another Michael Jordan, somebody they aren’t able to mold and shape and make their puppet.” – Dennis Rodman

“You watch some teams these days and you wonder if they just met on the playground and decided to choose up sides.” – Dennis Rodman

“The NBA’s chosen ones think I’m setting a bad example? I think they need to look around and stop taking themselves so seriously.” – Dennis Rodman

“I understand what rappers are talking about. Rap is less about educating people about the black community and more about making money.” – Dennis Rodman

Now that you know all about Dennis Rodman’s net worth, and how he achieved success; let’s take a look at some of the strongest lessons we can learn from him:

Smile your heart out to others because it makes everybody’s day brighter. The best life lesson of all!

2. Everything In Life Takes Time

Overcoming difficulties and reaching success. It doesn’t come in a matter of months. It takes years. So be patient. You will get there.

It is far better than blocking yourself off to any feeling whatsoever.

How much is Dennis Rodman worth?

Dennis Rodman’s net worth is estimated to be $500 Thousand.

How old is Dennis Rodman?

How tall is Dennis Rodman?

Rodman was famous for his rebounding skills and defense techniques.

What do you think about Dennis Rodman’s net worth? Leave a comment below.