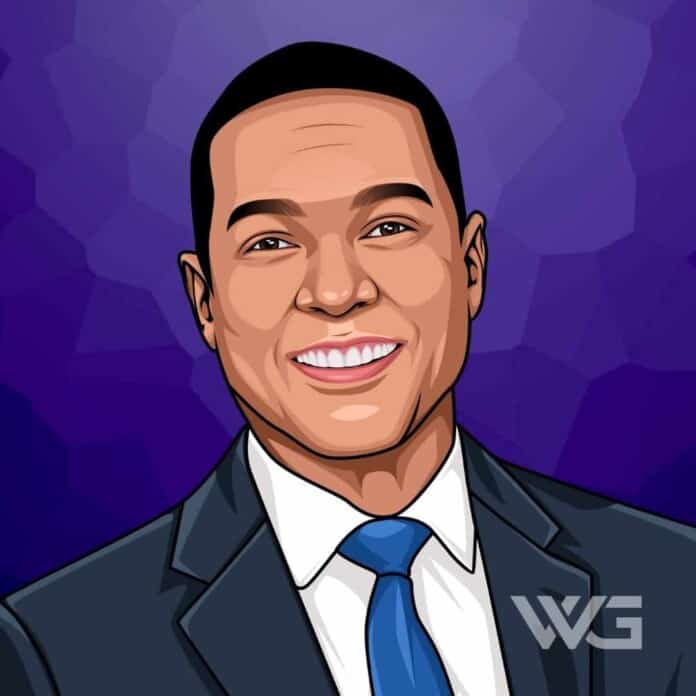 What is Don Lemon’s net worth?

Lemon was born in Louisiana, and he anchored many weekend new programs on local television stations in Pennsylvania and Alabama. He then went on to work as a news correspondent for NBC.

In 2014, he achieved prominence as the presenter of CNN Tonight.

As of December 2022, Don Lemon’s net worth is estimated to be roughly $12 Million.

Donald Carlton Lemon was born on the 1st of March, 1966, in Louisiana. Lemon attended Baker High School, where he was voted class president during his senior year.

Lemon attended Louisiana State University, and he graduated from Brooklyn College in New York. He later majored in broadcast journalism when he worked as a news assistant.

Lemon won an Edward R. Murrow Award for his work. In 2006, he warned three Chicago/Midwest Emmy Awards, one for a business feature about real estate listings and two awards for reporting on Africa’s HIV/AIDS situation.

In 2011, he discussed colorism in the black community and the sexual abuse he had experienced when he was a child. He came out as gay, and he stated that he has known about his sexuality since he was 5-6 years old.

In 2006, Lemon joined CNN. Since 2014, he has also hosted CNN’s New Years’s Eve special from New Orleans. He introduced his broadcast with “This is CNN Tonight, I’m Don Lemon, the United States president is racist’ in 2018.

He was honored with a Native Son Award in 2016. The following year, “Out” named him on its Power 50 list of “the most influential LGBTQ people in the United States.

How Does Don Lemon Spend His Money?

Don Lemon is known for being one of the richest television presenters. His annual CNN salary is reported to be $4 million. His income is mostly from his salary and bonuses. Lemon is a proud owner of a home in Sag Harbor.

Other amenities include a library with a game table, a master bedroom, and a gas fireplace. Lemon reportedly paid $3.1 million for the Sag Harbor home.

Here are some of the best highlights of Don Lemon’s career:

“Regret is not an apology. I regret that I ran the stop sign, right, but, yeah, I’m not sorry for what I was speaking. I regret that because I got a ticket. You can regret things and still not be sorry for them.” – Don Lemon

“Everything in Louisiana is about layers. There are layers of race, layers of glass, layers of survival, layers of death, and rebirth layers. To live with these layers is to be a true Louisianian. This state has a depth that is simultaneously beyond words and yet as natural as breathing. How can a place be both other-worldly and completely pedestrian is beyond me; however, Louisiana manages to do it. Louisiana is spooky that way.” – Don Lemon

“These are the books on my summer reading list. I haven’t had a lot of time off this summer to read, so my list so far is aspirational. The only one that’s a must-read right away is Caste: The Origins of Our Discontents by Isabelle Wilkerson. I’m interviewing her for my podcast, “Silence Is Not An Option.” I’m fascinated by the subject.” – Don Lemon

Now that you know all about Don Lemon’s net worth, and how he achieved success; let’s take a look at some of the best lessons we can learn from him:

When you are the first of anything, there is a bigger responsibility put on you. Make sure you breathe and focus on your goal.

How much is Don Lemon worth?

Don Lemon’s net worth is estimated to be $12 Million.

How old is Don Lemon?

How tall is Don Lemon?

Don Lemon is an American television news anchor and journalist best known for being one of the lead presenters for CNN. Lemon has also spent time at NBC and MSNBC throughout his career.

Thanks to his activities with ‘CNN Tonight’ he has won several awards, including three Emmy Awards. He is considered one of the greatest African Americans in the world and one of the most influential people.

As of December 2022, Don Lemon’s net worth is estimated to be roughly $12 Million.

What do you think about Don Lemon’s net worth? Leave a comment below.