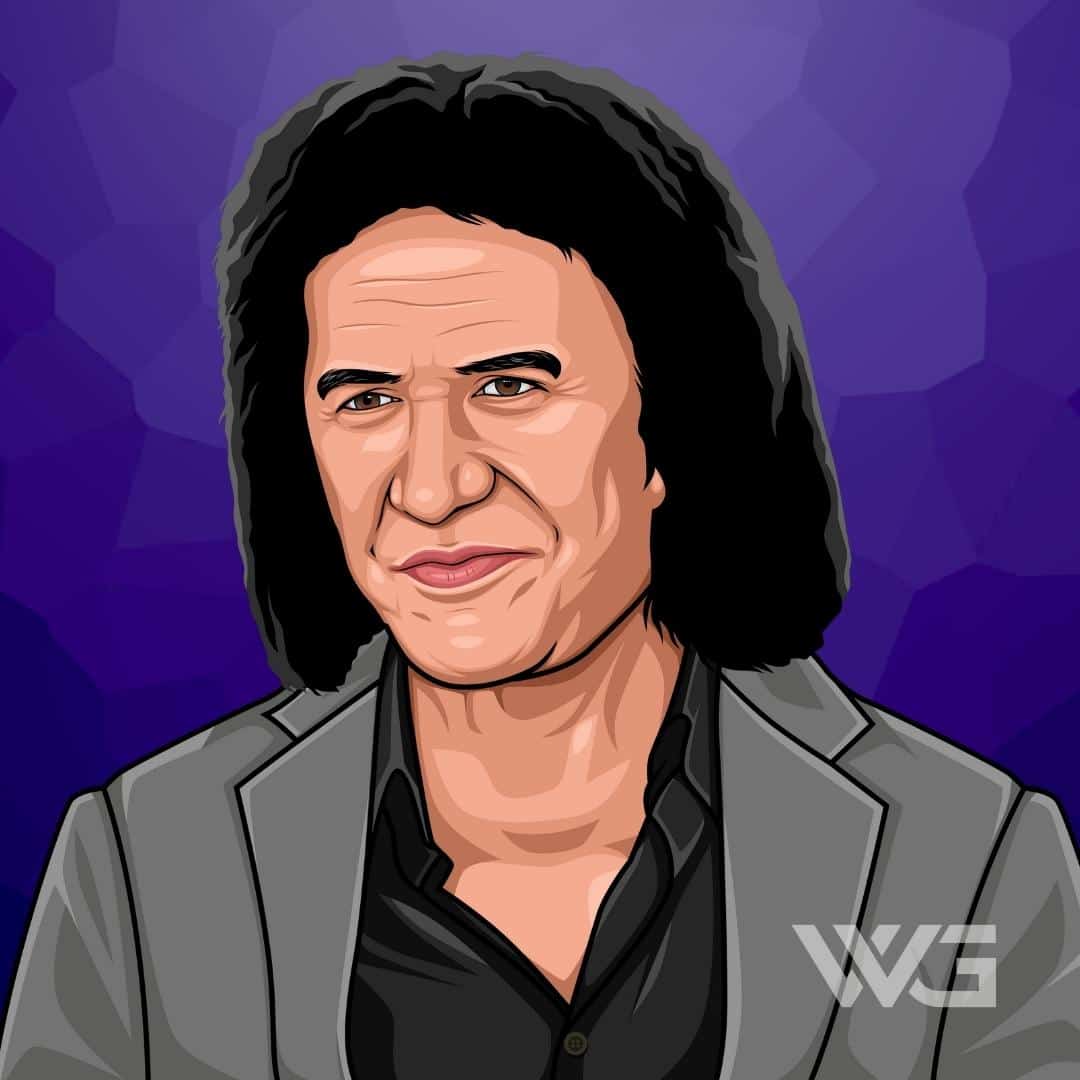 What is Gene Simmons’s net worth?

Gene Simmons is the legendary rock star co-founder of the 70s rock band, KISS. This internationally famous group has made Gene and his fellow band members enormously wealthy.

However, Simmons’ wealth didn’t come from the actual music itself, although it helped, of course.

Through licensing agreements on merchandise, Gene and the band placed their logo and iconic name on more than 5,000 different products, from t-shirts to pinball machines.

His family are Holocaust survivors, with his mother, brother, and uncle the only family members to survive a Nazi concentration camp.

Gene and his mother left Israel when Gene was 8 and the two moved to Queens, New York City.

After moving to America, Gene took on a more American-sounding name, calling himself Eugene Klein.

His mother saw that he was passionate about music and bought him his first guitar, but after a while, Gene decided to change over to the base, which he believed would help him get into a band more easily.

While at high school, he put together his first band called Lynx, which was shortly after renamed, Missing Links.

Gene moved on to a new band called The Long Island Sounds while attending Sullivan County Community College. He then transferred to Richmond College, where he earned a degree in education and started teaching grade school Spanish.

To supplement his teaching work, he became an assistant to the editor of the Vogue and Glamour magazines.

While working alongside the glamorous editor, he decided to change his name to Gene Simmons, which would go on to be one of the most famous names in rock music worldwide.

Shortly after that, he joined a band called Bullfrog Beer, taking his first major step in his music career that would eventually lead him to meet Paul Stanley.

Once Gene met Paul, they decided to team up and form a band called Wicked Lester, which was immediately successful as they signed a deal with Epic Records.

The band’s first album was a disaster, so Paul and Gene set out to become one of the best bands in the world.

They teamed up with Peter Crisis, a drummer, along with guitarist Paul Frehley, marking the start of the legendary band, KISS.

Their manager suggested that they wear full-stage makeup as a way to stand out from other bands and the fans loved it.

They released their first album in 1974, which was popular, but the next two albums were a bust. To build momentum, the band decided to perform live, and with Gene’s fire-breathing stunt, built their reputation for performing amazing live shows.

They recorded their first show and the album went on to reach quadruple platinum status. The band played for 5 years and was incredibly successful, but they ultimately decided to pursue their solo careers.

After pursuing their solo careers, the band decided to get back together but was met with backlash from their fans. The makeup and Genes theatrics were not impressing the crowds anymore, so they decided to play without makeup or any other unusual gimmicks.

This new look helped the band grow in popularity, but it wasn’t working for them, so Peter Criss was voted out of the band and replaced with Paul Charles (stage name Eric Carr), who played for KISS up until he died in 1991.

In 2013, Paul Stanley and Gene teamed up with Doc Mcghee to become part owners of the LA Kiss Arena Football League team.

With the band’s decline, Gene released some solos, which you can see more of on his official Instagram account, and focuses on his publication, the Gene Simmons Tongue Magazine.

Gene earned hundreds of thousands of dollars from his stage performances and album sales, but the real money was in licensing deals he helped negotiate.

It is believed that Gene Simmons now earns a salary of over $34 million annually.

With sales of KISS merchandise still ticking along, Gene and his fellow band members continue to enjoy the financial rewards of their iconic status.

Despite the rockstar persona and garish makeup, Gene is a down-to-earth individual with a head for numbers and an excellent grasp of investment strategy.

Here’s a breakdown of Gene Simmons’s annual net worth:

By investing the money he received from the band’s live performances and commercial deals, Gene has amassed enormous wealth.

Gene is currently married to Canadian actress, Shannon Lee Tweed. The two were dating for 28 years before getting married at the Beverly Hills Hotel in 2011 and have two children, Nick and Sophie.

In the past, Gene dated various stars, revealing that while still dating Cher, he had a crush on Diana Ross.

In true rockstar fashion, Gene has participated in some outrageous stunts, the main one being his fire-breathing acts at live performances.

KISS is known for their outrageous stage shows and Gene was instrumental in ensuring that each tour was an extravaganza of new material and stunning visual entertainment.

Here are some of the more memorable moments from Gene Simmons’s career:

Gene Simmons is now focused more on his editorial endeavors and rock music has taken a bit of a backseat.

How Does Gene Simmons Spend His Money?

Gene had a mansion in the suitably celebrity-filled Beverly Hills which was valued at over $37 million.

His daughter shares his philanthropic side and has opened a charity foundation called Sophie’s Place, which helps benefit children.

Gene loves to drive, and bought and sold the most expensive cars in the world while living the high life of a rock legend.

KISS was a niche rock band with a dedicated following and fans who loved Gene’s antics on stage. But he  not only excelled on stage, Gene took his inspirational ideas and turned them into movies as well.

Here are some of the best highlights of Gene Simmons’s career:

Gene continues to work on his music but is not nearly as active as he once was, only occasionally releasing songs for his fans.

Never one to play things down, Gene is always an interesting celebrity to interview, with his funny stories and unique worldview providing plenty of soundbites.

He lives his life to the full, never asking permission or waiting for someone else to take the initiative.

Here are our favorite quotes from Gene Simmons:

Gene Simmons is an intelligent and astute celebrity with a pragmatic view of life.

Now that you know all about Gene Simmons’s net worth, here are some of the best success lessons to learn from Gene Simmons:

Gene decided to get the most out of every day as if it was his last day on earth. With this mindset, he has achieved the success and fame he always wanted.

Gene believes that money is the root of all evil, mainly due to you not having enough. With this in mind, he set out to make as much as he possibly could, but at the same time stayed true to who he really is.

Don’t let failure be the end of your dream, rather let it be a lesson. Each failure gets you closer to your ultimate goal and lets you know what not to do in the future.

Gene is a legend in the music industry who created a whole new look for rock music by becoming one of the top performers of all time.

Despite his aggressive persona and no-nonsense attitude, Gene is a very giving person who does not let money define who he is.

He has achieved a lot in his life but has dialed down the wild side a bit now, content to live a little more quietly in Beverly Hills with his family.

What do you think about Gene Simmons’s net worth? Leave a comment below.