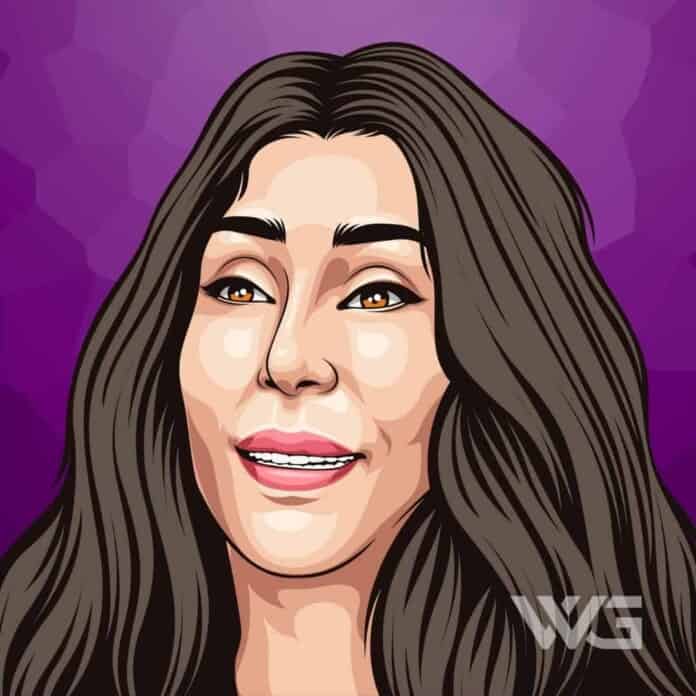 What is Cher’s net worth?

Cher is an American singer and actress from El Centro, California.

She is Commonly referred to by the media as the Goddess of Pop, she has been described as embodying female autonomy in a male-dominated industry. She is known for her distinctive contralto singing voice and for having worked in numerous areas of entertainment.

Cherilyn “Cher” Sarkisian was born on the 20th of May, 1946, in El Centro, California. Cher is the daughter of John Sarkisian and Georgia Holt.

Her father was rarely home when she was an infant, and her parents divorced when Cher was ten months old. Her mother later married actor John Southall, with whom she had another daughter, Georganne, Cher’s half-sister.

Cher began her career in 1964 when she worked with Sonny Bono to form the group called ‘Caesar & Cleo’. They came out with the singles ‘Do You Wanna Dance?’, ‘Love Is Strange’ and ‘Let the Good Times Roll’.

In 1965, she came out with her debut solo album ‘All I Really Want to Do’. The album was produced by her husband Sonny Bono and received positive reviews.

Her second album ‘The Sonny Side of Cher’, one of her successful albums, was released under the Imperial Records label. The album ‘Where Do You Go’ and the hit song, ‘The Girl from Ipanema’.

In 1967, her fourth album ‘With Love, Cher’ was released. The album was a success and the following year, she came out with her fifth album ‘Backstage’, which was a commercial failure.

She came out with the album, ‘not.com.mercial’ and the following year, one of her bestselling albums ‘Living Proof’ was released in Europe in 2000.

In June 2013, she released the single ‘Woman’s World’, which is part of her album ‘Closer to the Truth’, which is scheduled to be released in September 2013.

Here are some of the best highlights of Cher’s career:

“Hate crimes are the scariest thing in the world because these people really believe what they’re doing is right.” – Cher

“Performers love to perform – that’s the thing that we do. I think one of the best things was being able to imagine anything that I wanted, anything that I came up with we could do because this theater is unbelievable.” – Cher

“When I grew up, it was a time when women were just supposed to be cute and not have many opinions. My mother and her friends were quite different. They were all the most beautiful women you’ve ever seen, and they were very strong women.” – Cher

“So okay, I don’t want to be a traitor to my generation and all, but I don’t get how guys dress today. I mean, come on, it looks like they just fell out of bed and put on some baggy pants and take their greasy hair-ew!-and cover it up with a backward cap and like, we’re expected to swoon? I don’t think so.” – Cher

“Women have to harness their power – it’s absolutely true. It’s just learning not to take the first no. And if you can’t go straight ahead, you go around the corner.” – Cher

Now that you know all about Cher’s net worth, and how she achieved success; let’s take a look at some of the strongest lessons we can learn from her:

1. Wear Clothes Only Suitable After the 9 pm Watershed

Let’s turn back time to 1989 and the infamous video for If I Could Turn Back Time, which caused a major upset amongst American Naval officials who were not informed of the raunchy nature of her ensemble.

Cher’s look for the video, which says “I’m here to straddle a cannon in a strategically placed ribbon and there’s absolutely nothing you can do about it,” was so shocking that MTV wouldn’t play it before the 9 pm watershed.

2. Sparkle and Sequins Are Your Two Best Friends

Lesson number four is not so much a fashion moment as a perennial sartorial statement for Cher, because the sheer amount of sparkle and sequins she has worn throughout her career must collectively weight a ton.

Cases in point: Cher in a full sequin and feather bodysuit at the 1974 Met Gala; Cher at the 1986 Oscars in her best ‘sonic the hedgehog does drag’ finest; Cher as Cleopatra at a 1988 Halloween party (she may as well have just come as herself). Bob Mackie, you still give us heart palpitations – but in the best possible way.

3. Believe in Life After Love

A song that sits beside Gloria Gaynor’s I Will Survive as an ultimate heartbreak survival anthem, Believe is truly one of the most moving pieces of pop music in the history of Cher-kind.

Even the heavy use of millennium worthy auto-tune (one that became known as ‘the Cher effect’, distorting her signature belting vocals into a robotic caterwaul) can’t knock the sheer emotion pulsating throughout. All together now: I DON’T NEED YOU ANY MORE!

How much is Cher worth?

Cher’s net worth is estimated to be $360 Million.

How old is Cher?

How tall is Cher?

Cher is an Academy Award, Golden Globe and Grammy Award-winning singer and actress. Cher is referred to as the ‘Goddess of Pop’. A high school dropout, she began a career in music at the age of sixteen and later formed the group called ‘Sonny and Cher’ along with singer Sonny Bono, whom she eventually fell in love with and married.

What do you think about Cher’s net worth? Leave a comment below.