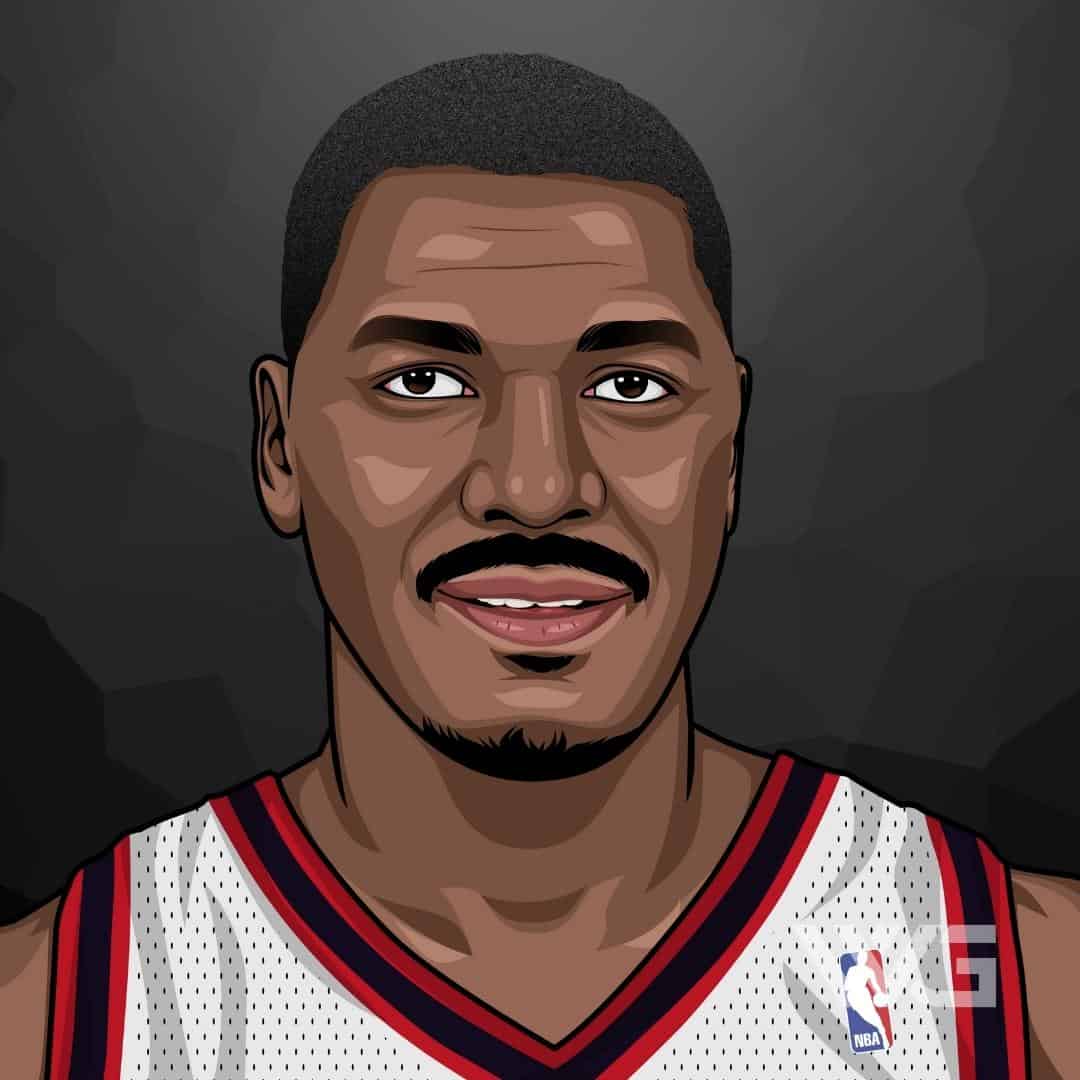 What is Hakeem Olajuwon’s net worth?

Hakeem had one dream in life, and that was to become a professional basketball player. With his previous experience of soccer and handball, Hakeem was able to quickly learn how to excel on the basketball court.

After relocating to Texas from Nigeria, Hakeem joined the Houston Rockets, helping them to win back-to-back NBA championships during the 1990s.

He went on to play for the Raptors and was instrumental in the USA’s 1996 Olympic gold medal win.

As of November 2022, Hakeem Olajuwon’s net worth is estimated to be $300 Million.

His parents, Salim and Abike Olajuwon, were owners of a cement business in his hometown. Hakeem grew up in a large family with seven siblings who were all taught from a young age to work hard and be disciplined.

Hakeem played soccer as a child, starting as a goalkeeper for his local school team and didn’t even consider other sports until his mid-teens. He had not played basketball until he entered a tournament while attending the Muslim Teachers College at the age of fifteen.

He took an instant liking to basketball and, with commitment and hard work, excelled at the sport in a short time.

With his new liking for basketball, Hakeem emigrated from Nigeria to play at the University of Houston. Hakeem was immediately redshirted and mostly sat on the bench during the season.

It was suggested that Hakeem work with NBA MVP winner Moses Malone. After a summer of constant training, Hakeem returned better than ever.

He seemed to dunk balls effortlessly, which the college described as “looking like a dream”, which gave Hakeem his well-known nickname. With his new-found abilities, Hakeem was able to lead his team to consecutive NCAA championship games.

With Hakeem getting increased attention, he was selected to be a part of the Houston Rockets in 1984. Hakeem immediately improved the team’s win-loss record and led the team to the Western Conference Finals. Shortly after, the team went to the NBA Finals.

With his consistent performances and awesome play, Hakeem earned the name of one of the top centers in NBA history. Leading his team to the 1994 NBA Finals and winning the title, Hakeem brought the Houston Rockets its first win in a professional sports championship. The Rockets had last won 30 years before.

When Hakeem was at the height of his career, he was selected to be a part of the 1996 US Olympic basketball team. Alongside big-league basketball players such as Shaquille O’Neal and Scottie Pippen, Hakeem and the team won the gold medal. It was unfortunate that Michael Jordan was unable to play for team USA in 1996.

Hakeem left the Rockets shortly after winning his 12th All-NBA Team. He refused a $13 million deal to rejoin the Rockets in 2001 and instead was traded to the Toronto Raptors. Unfortunately, Hakeem was unable to keep up with his past success and reached an all-time career low.

In 2002, Hakeem suffered a back injury and retired from basketball as one of the all-time greats. He spent time working with professional players like LeBron James, who joined him in Houston during the off-season, to help him improve his game.

Over the course of his phenomenal playing career, Hakeem managed to earn an enormous amount of money. He carefully invested his earnings and was able to transition to a successful business career after leaving basketball.

He is currently retired but continues to earn huge amounts of money from his real estate portfolio and other investments. You can follow his official Twitter account for the latest news on what he is up to.

Hakeem Olajuwon is Muslim, which precludes him from either earning or paying interest on money. This has not stopped him from creating enormous wealth through real estate and other business interests.

Here’s a breakdown of Hakeem Olajuwon’s annual net worth:

Despite being retired, Hakeem continues to enjoy the fruits of his disciplined financial approach to business and investment.

Hakeem got married on the 8th of August 199 to Dalia Asafi. The couple has four children whom they try to keep out of the public eye.

He has a passion for languages and is fluent in French, Nigerian, and Arabic, which helps immensely during his interviews.

Hakeem Olajuwon is devoutly Muslim and, because of his interest in spirituality, found himself in a few arguments about his faith at the beginning of his career.

It was inevitable that Hakeem would garner massive attention in the basketball world after his early on-court performances.

Not only is he above average in height, but he was also extremely agile and talented in his prime, taking on the best in professional basketball and coming out on top.

Here are some of the memorable moments from Hakeem Olajuwon’s career:

As befits a champion, Hakeem is a humble person who loves to give back to the sport that made him such a rich man.

To this end, he makes a point of helping to train talented youngsters who might otherwise not get the opportunity to play basketball.

How Does Hakeem Olajuwon Spend His Money?

After retirement, Hakeem took a huge interest in real estate investment, successfully transacting over $100 million worth of real estate deals to date.

Hakeem’s modus operandi is to acquire run-down properties that need development and then turn them around into very profitable investments.

He has purchased various types of buildings, from train stops to parking garages and even stadiums. He was also a part-owner of the former World Trade Centre building which he sold a year before the 9-11 tragedy.

While he likes some of the most expensive cars in the world, his huge frame is just not designed to fit into sports cars designed for smaller humans.

With a professional career spanning 18 years, Hakeem has produced magic moments for his fans every single season on the court.

It is little wonder that he made All-Star status and became one of the most valuable basketball players of all time.

Here are some of the best highlights of Hakeem Olajuwon’s career:

Being recognized as one of the greatest basketball players in history, Olajuwon was honored as the first non-American All-Star and received the NBA’s Most Valuable Player Award.

Hakeem grew up in a conservative family with strong family values.

Adherence to the lessons he learned from his parents as a child has helped make him the player and the businessman that he is today.

Here are our favorite quotes from Hakeem Olajuwon:

Coming from a background dedicated to hard work, Hakeem Olajuwon has much to offer talented youngsters who see life as an uphill battle and struggle to find the motivation to achieve greatness.

Hakeem credits never giving up as one of the primary reasons that he is successful. He knew his full potential and realized that only hard work and perseverance would allow him to achieve his goals.

2. There Is So Much More To Life Than Fame

Hakeem was able to achieve fame very quickly, but he knew that fame was not all the world had to offer. Doing well and becoming famous is only a small part of what makes life interesting and enjoyable.

3. Stay True To Yourself And Your Beliefs

No matter the criticism of his religion, Hakeem always stood by what he believed in. It is easy to give in to what other people want, especially when there’s a lot of money involved.

Hakeem has proven that you can stand strong in your beliefs yet still be successful.

Hakeem is one of the greats and took basketball to a whole other level. He holds the record for more than 3,000 blocked shots and over 2,000 steals over the course of his career.

Despite starting with little knowledge of the sport, he eventually played alongside and exceeded the exploits of big-league athletes.

He may be retired, but Hakeem still lives and breathes basketball. He spends time at home in Houston with his family and travels to the Middle East to study his religion and enjoy life.

As of November 2022, Hakeem Olajuwon’s net worth is estimated to be $300 Million.

What do you think about Hakeem Olajuwon’s net worth? Leave a comment below.

Discover the brand endorsements and movie roles that have helped model, DJ, and actress Petra Silander earn her million-dollar net worth.