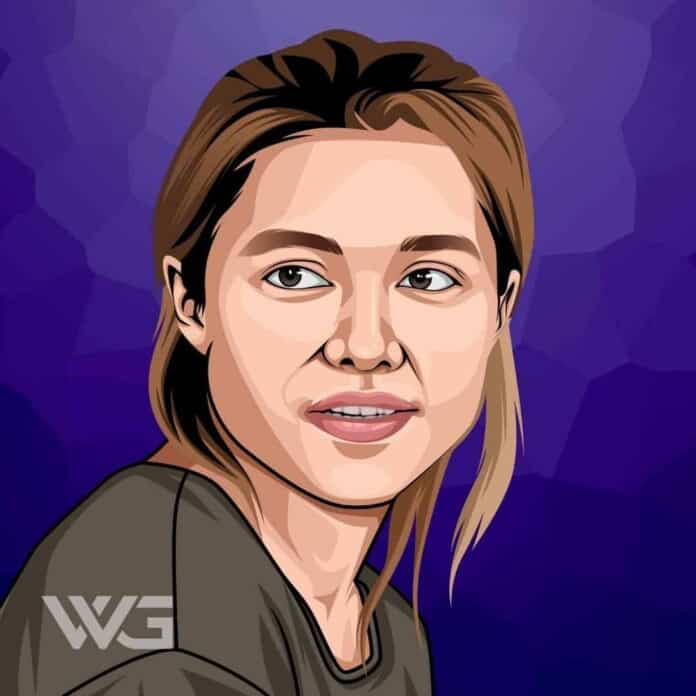 Florence Pugh is an English actress from Oxfordshire. Pugh made her professional acting debut in the mystery film ‘The Falling’ and had her breakthrough with a leading role in the independent drama ‘Lady Macbeth’.

Florence Rose C. M. Pugh was born on the 3rd of January, 1996, and raised in Oxfordshire. Her father, Clinton Pugh, is a restaurateur in Oxford, while her mother, Deborah, is a dancer and dance teacher.

Her love of accents and comedy was first displayed at age six at Cokethorpe School in Hardwick, Oxfordshire, when she was cast as Mary in a Christmas nativity play and decided to play the role with a Yorkshire accent.

Pugh made her professional acting debut in mystery drama ‘The Falling’, in which she played a precocious teenager opposite Maisie Williams, while still in school.

In 2018, Pugh featured in the action film ‘The Commuter’ and played Cordelia to Anthony Hopkins’ Leir of Britain in Richard Eyre’s television film ‘King Lear’. Later that year, she portrayed Elizabeth de Burgh in the Netflix historical film ‘Outlaw King’.

Pugh next starred as professional wrestler Paige in ‘Fighting with My Family’ in 2019, her first lead role in a Hollywood film. A comedy-drama about Paige’s relationship with her family, co-starring Lena Headey, and Dwayne Johnson.

In the same year, she took on a leading role in Ari Aster’s horror film ‘Midsommar’, about a troubled couple who encounter Swedish cultists.

Here are some of the best highlights of Florence Pugh’s career:

“I remember imagining what she would have had to do. I thought: ‘Yeah, I really want to be a part of this. It’s not like I go: ‘I really want to play a lady who goes insane in a field.’” – Florence Pugh

“There was something about her insanity at the end that I knew I would enjoy, and I knew I needed to do. I had never played anyone like that before and that was so exciting. She doesn’t get better. She gets more confused but in that confusion, she is released. And that is fascinating.” – Florence Pugh

“I knew that her grief, her pain, her constant tightrope of avoiding emotions, it needed to be exactly how someone would deal with the scenario they were in. And I’ve never come close to feeling any of that.” – Florence Pugh

“In my life, I’ve never witnessed grief like that or seen someone go through that level of pain. To get it perfect, I knew, would be so exhilarating and the payoff would be a fantastic feeling — which it was.” – Florence Pugh

Now that you know all about Florence Pugh’s net worth, and how she achieved success; let’s take a look at some of the lessons we can learn from her:

Grace is valuable as gold.

You can’t run, can’t Hide. Your fate will be always ahead of you and there is nothing you can do to change it.

Be careful not to fall in love with the fantasy you imagined instead of what’s standing before you.

How much is Florence Pugh worth?

Florence Pugh’s net worth is estimated to be $8 Million.

How old is Florence Pugh?

How tall is Florence Pugh?

Florence Pugh has starred in multiple movies, and she is really successful. Pugh made her professional acting debut in the mystery film ‘The Falling’, and since then she has starred in movies such as ‘Malevolent’, and ‘Midsommar’.

As of 2020, Florence Pugh’s net worth is estimated to be roughly $8 Million.

What do you think about Florence Pugh’s net worth? Leave a comment below.