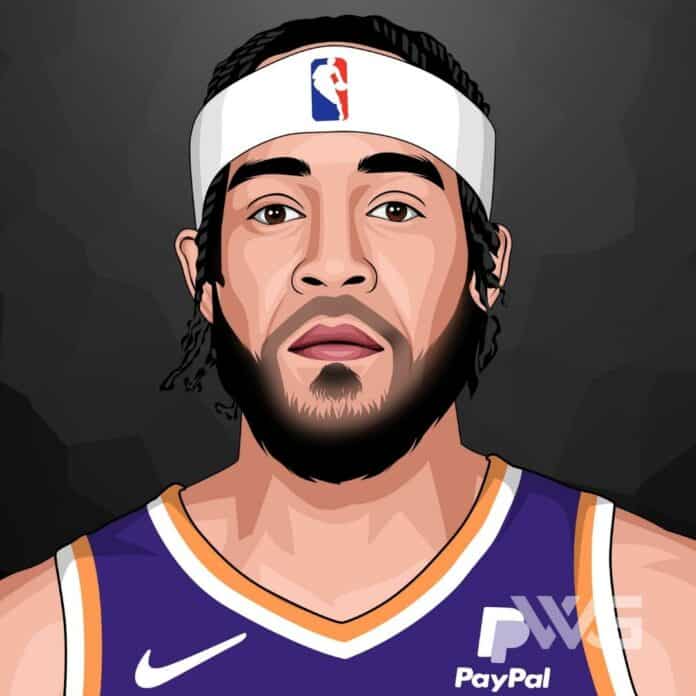 What is JaVale McGee’s net worth?

However, McGee has been playing in the NBA since 2008, and during his career has been a member of eight different teams.

Despite his long career, he has no plans of retiring and enjoying his riches just yet, so we can expect much more from him in the future.

As of February 2023, JaVale McGee’s net worth is estimated to be $14 Million.

His father, George, was drafted by the Portland Trail Blazers in 1985, and his mother, Pamela, won two NCAA Division One championships and an Olympic Gold medal in 1984.

She also played for the Los Angeles Sparks and the Sacramento Monarchs during her career after the 1997 WNBA draft.

Throughout high school, he stood out as a talented forward, and after joining the University of Nevada, he became their starting center, averaging 14 points and 7 rebounds per game.

Following his sophomore season, he hired an agent and decided to make himself available for the 2008 NBA draft.

JaVale McGee was drafted by the Washington Wizards in 2008 as their 18th overall pick, and he signed a two-year deal with them.

He was selected to participate in the 2011 NBA Slam Dunk Contest, becoming the first Wizard to enter the event. During the contest, he set the Guinness World Record for the most basketballs dunked in a single jump, managing three at one time.

During a game against the Chicago Bulls the same year, he earned his first triple-double with 11 points and 12 blocks and rebounds.

In 2012, he was traded to the Denver Nuggets, and in his debut match, he made the game-winning dunk with only seconds left on the clock.

The same year, he also made his first NBA playoff appearance and later signed a four-year contract with the Nuggets for $44 million.

He would play with the Nuggets until 2015 when he was traded to the Philadelphia 76ers. However, after only six games, he was waived, causing him to move to the Dallas Mavericks for the remainder of the season.

JaVale Wood would continue jumping between teams, joining the Golden State Warriors from 2016 to 2018 before leaving for the Los Angeles Lakers, who he remained with until 2020.

In 2020, he joined the Cleveland Cavaliers for a single season before signing with the Phoenix Suns for 2021-22.

Currently, he is signed with the Dallas Mavericks until 2023, though it remains unknown if he will spend a second season with them.

He may not yet be one of the richest NBA players in the world, but JaVale McGee is well on his way with how much he continues to earn.

While his average salary has fluctuated between teams, McGee has consistently made millions every year, and this is unlikely to change anytime soon.

Due to playing for some of the richest NBA teams, JaVale McGee has earned a significant amount of money that has made him extremely wealthy.

Although he isn’t currently one of the highest-paid players in the sport, this could very well change as he continues making a name for himself on the court.

Outside of basketball, JaVale starred in his own reality TV show with his mother called Mom’s Got Game, which premiered in 2013.

In 2017, he announced that he had fully dedicated himself to a vegan diet after having dabbled with it for a few years previously.

He is also a successful record producer in his spare time, making music under the name Pierre from his studio in Inglewood, California.

Like Stephen Curry, JaVale McGee has won a couple of important awards during his career.

While he isn’t as decorated as some other players in the NBA, like Dwayne Wade, he has certainly earned some impressive honors.

Here are some of JaVale McGee’s greatest career awards and titles:

Despite not having earned as many awards as Russell Westbrook or James Harden, JaVale McGee has done very well for himself during his career.

It is likely we will see him earn even more honors in the future as he continues to participate in the NBA as one of its best players.

How Does JaVale McGee Spend His Money?

Fans got a look at JaVale McGee’s lavish lifestyle when he put his Encino mansion up for sale in 2020 for $2.49 million.

It may not sport one of the largest swimming pools in the world, but the home does boast 6,300 sqft of living space and a resort-style pool, spa, cabana, and shower room in the backyard.

The inside is just as impressive, with five bedrooms, nine bathrooms, a gourmet kitchen, a movie theater, and a private gym with mirrored walls. There is even a second-story deck that provides stunning views of the half-acre property.

Although we don’t yet know where he has moved to or how much his new mansion cost, we can easily assume it is just as lavish as this one, if not more so.

JaVale McGee has reached many milestones during his long career as a professional basketball player.

However, some moments in his career stand out more than others for their overall impact on his career.

Here are some of the best highlights of JaVale McGee’s career:

He may not be as well-known as Kevin Durant, but his NBA career has certainly been filled with many memorable moments that have helped him stand out.

We expect to see much more from him in the future as he continues playing professionally and making a name for himself with some of the sport’s best teams.

JaVale McGee has set himself apart in the NBA as one of the most talented and experienced players on the court.

However, despite spending so long in the sport, McGee hasn’t lost his passion for the game, and he still gives every match his all.

Here are our favorite quotes from JaVale McGee:

There is a lot we can learn from JaVale McGee and his long and successful career in the NBA.

Now that you know all about JaVale McGee’s net worth, we can take a look at what he can teach us about reaching our own goals.

Here are some of the best success lessons to learn from JaVale McGee:

If you want to be successful, you can’t worry about what other people are doing. Your progress should be your only concern.

Focus on what you can do for yourself to get ahead, and don’t worry about those who have already achieved success. You do you.

Everyone has detractors and people who want to bring them down. Don’t pay attention to those who want to see you fail; instead, use them to motivate you.

Nothing shows up haters like succeeding in spite of them, so take pride in every achievement that proves them wrong.

If you’re in a place where you can help others, you should always take the opportunity.

Not only can it make a tangible in the world around you, but it can also give you a great sense of accomplishment.

While he has been playing professional basketball for over a decade, he has no plans to retire anytime soon.

Be sure to check back often so that you won’t miss any updates on McGee’s life, career, and growing wealth!

As of February 2023, JaVale McGee’s net worth is estimated to be $14 Million.

What do you think about JaVale McGee’s net worth? Leave a comment below.

What is Jessica Simpson's net worth? Introduction  As of ,...